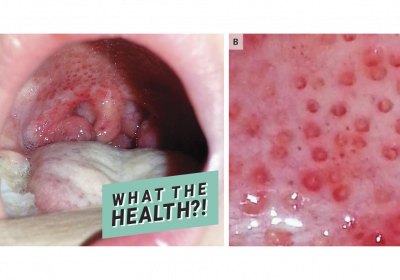 When kids get sick, parents can often jump to the worst conclusions—especially if you Google their symptoms. (As a parent to two littles, I know this to be true.) So, when strange red dots showed up on the back of a young girl’s throat, you can imagine the worry.

A new report in this week’s New England Journal of Medicine shows the pretty vivid photos of what experts call “doughnut lesions” inside a 9-year-old girl’s mouth. In the report, Japanese researchers Akira Kobayashi, MD and Hiromichi Iwasaki, MD describe the case of a healthy girl who went to a primary care clinic with some pretty run-of-the-mill symptoms. Namely: a sore throat and fever of 101.3 degrees Fahrenheit.

Then the doc saw her throat: Her uvula (the thing that hangs down at the back of your throat) was inflamed, her tonsils were enlarged, and she had so-called doughnut lesions dotting the inside of her mouth. Her lymph nodes were also swollen. The pics show it all—from far away it looks like the roof of her mouth is dotted with red spots. Upon closer inspection, the zoomed-in photo shows that these round, red spots have a pale center, which is where they get their doughnut name. Her tongue also looks like it’s covered in a white film.

The doctor swabbed her throat to perform a rapid strep culture for group A strep. Sure enough, it was positive. Bacteria cause this common throat infection, and it’s most likely to affect school-age kids 5 to 15 years old, according to the CDC. In fact, the patient had many of the most common signs and symptoms of strep. (It’s worth noting that strep may be caused by a virus—not bacteria—if you also have a cough and runny nose along with your sore throat.)

The fastest cure for strep is with the antibiotics penicillin or amoxicillin, according to the CDC. (The patient in this report took amoxicillin.) And it’s important to get treated, because in the unlikely event strep spreads, you can experience ear and sinus infections or even more serious conditions like rheumatic fever (which affects the heart).

Doughnut lesions are a classic sign of strep. But while it may have been obvious to the doctor, that culture test was necessary. Doctors can’t diagnose strep just by looking at someone’s throat. You don’t want to take antibiotics “just to be safe.” One in three antibiotic prescriptions are unnecessary, according to a 2016 study published in JAMA, which includes those doled out to treat sore throats. Antibiotic overuse promotes antibiotic resistance, when the drugs don’t work when needed to kill bacteria.

All that’s to say, if you find that your kids have strep—doughnut lesions or not—make sure they get the strep test before popping antibiotics.