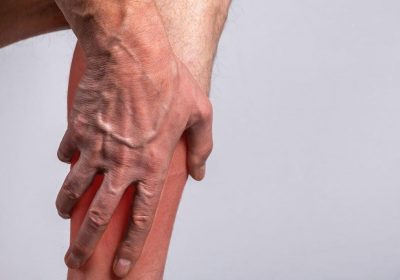 Why cholesterol is bad for you

Peripheral artery disease (PAD) is ranked as the third leading cause of cardiovascular morbidity around the world, after coronary artery disease and stroke. Yet the condition remains largely underdiagnosed due to the high prevalence of asymptomatic cases. It is often one of the first complications to arise from high cholesterol and can develop over the course of a lifetime. The size of a person’s calves could change noticeably as the condition advances, according to various health bodies.

According to Medline Plus, the initial symptoms of PAD may be noticeable when walking uphill, for longer distances or faster.

As the condition progresses, however, symptoms may start to come on more quickly, and with less physical exertion.

The lower limbs may subsequently start to feel numb when the body is at rest, and the legs may start to look pale or feel cool to the touch.

When PAD is more severe, however, findings may include:

People with severe PAD are at significantly higher risk of losing a limb or suffering from critical limb schema (CLI).

In CLI, there is inadequate blood flow to the legs, which cause leads to the damage or death of tissue that requires amputation.

This is partly because PAD in the lower extremities is closely related to the wasting and thinning of muscle mass, and cell death of calf muscles.

A study published by the health portal looked closely at the correlation between calf muscle size and PAD, making notable observations along the way.

The study concluded: “Our results demonstrated lower calf girth indicated a higher likelihood of PAD in men, a lower calf circumference may be due to small muscle mass.”

What’s more, “small muscle mass has been shown to contribute to insulin resistance and pre-diabetes and high lipid profiles,” noted the scientists.

Muscle wastage is typically linked to malnutrition, age, genetics, or a lack of physical exercise, sometimes it is caused by not using the muscles enough.

As the years pass, muscle mass in the body will also naturally shrink, causing strength and power to decline.

In PAD, however, the muscular fibres tend to waste and weaken more rapidly as the disease advances.

It is therefore in a patient’s interest to look out for earlier signs of PAD, to increase their chances of timely medical intervention.

Intermittent claudication is a common complaint among patients with peripheral artery disease, but changes may also occur in the appearance of the skin.

The Midwest Institute for Non-surgical Therapy explains that skin changes associated with PAD tend to be concentrated around the legs, ankles and feet.

“These changes often start as mild problems but, with time, can lead to more severe symptoms,” says the health body.

It adds: “The skin changes may lead to the skin feeling cool to the touch and becoming dry and itchy.”

Getting symptoms checked early is important, as hundreds of thousands of amputations are performed each year due to advanced peripheral artery disease.