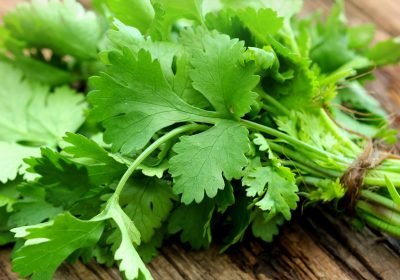 Cilantro isn’t for everyone. The delicate, zesty leaves of the coriander plant that grace guacamole, garnish shrimp dishes, and top light soups seem innocent enough—but they actually totally repulse some people. Trust me, witnessing a cilantrophobe’s offense to the herb is a sight. And while it’s an oddly specific hatred, turns out, disgust for the stuff is actually beyond their control, according to Monica Auslander Moreno, RD, and nutrition consultant for RSP Nutrition.

Cilantro dislike is genetic, she explains. “Some folks’s olfactory sensor genes are hypersensitive, and detect a ‘soap-like’ smell in cilantro.” So, while cilantro’s tanginess might taste pleasant to you, for some, a chemical in cilantro takes their taste buds for a wild, unpleasant ride.

Many cilantro-haters (and their family members) report experiencing that strong soapy taste Moreno mentioned (and shout-out to the poor soul who ate soap to make that super-specific comparison). But some, including Julia Child, who was a cilantro-shunner, described it as having “kind of a dead taste” rather than a soapy one, according to CNN. And then, 15 years later another culinary genius, Ina Garten, joined in on the party when she told TIME she regularly turns down the stuff, too.

If you’ve never heard of someone who’s disgusted by cilantro, that might be because cilantro-aversion varies by region, due to differences in exposure—so it might be less prevalent in your corner of the globe. According to a study published by BMC, only 3 percent of Middle Easterners dislike cilantro (the herb is heavily incorporated into the cuisine of this region, think: falafel) compared to 21 percent of East Asians—the largest population of cilantro-loathers.

Still, even with this wide disparity, the amount of people who hate cilantro worldwide is pretty small. But when you do happen upon a rare hater who doesn’t want to join you for cilantro-topped shawarma, just remember it’s not her, it’s her genes.