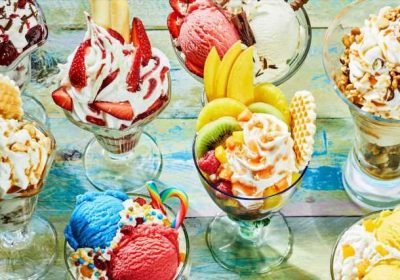 It’s no secret that Ree Drummond, the Pioneer Woman herself, is an extremely busy person. She’s on our televisions all hours of the day, she owns a food and lodging compound in Pawhuska, Oklahoma, and she has her kids and their billions of homeschooled farm friends to feed every day, never mind her perpetually ravenous rancher husband. But Drummond isn’t afraid to roll up her sleeves and get to work, which is why we’re not surprised to learn that she’s also taking some time out of her schedule to open up an ice cream shop.

So far, Drummond has kept her children and their friends alike busy with taste testing.

When you’re about to open an ice cream place in town, it helps to have teenage boys on hand to taste test the sundaes. Bryce and Kevin selflessly offered their services today. Somebody had to do it! ???

Oh, the horror! When I was young helping out my parents meant running down the street after our escape artist rottweiler or cleaning that weird nasty patch at the base of the toilet during Saturday chores, not taste-testing ice cream! But hey, with everything going on in the world today (and considering that global warming might make it hard to keep that ice cream frozen for too much longer, apocalyptically speaking), I think those kids deserve some casual spring days of eating sweets.

The final touches still have to be put on the space (we hear there are murals involved), but according to Drummond, it’s opening this week!

We never thought we’d say this, but with an ice cream shop, restaurant, deli, and a hotel all helmed by Drummond and her hubs, we’re wondering…is now Pawhuska, Oklahoma becoming a legit vacation destination?