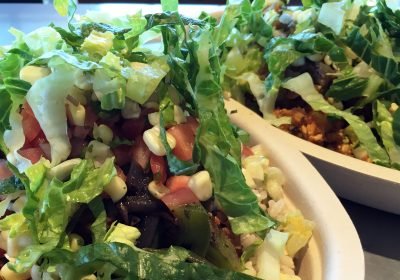 I like to call Chipotle “Chi-bloat-le,” because that’s how I often feel walking out of the place, stuffed to the upper ribs with a burrito so massive it forces me to waddle my way through the parking lot.

When I heard that Chipotle had released “preconfigured ‘vegan’ and ‘vegetarian’ bowls” to offer customers “meat-free alternatives” (press-release language!), I wondered if I could finally enjoy the flavors of Chipotle without the gut-rupturing aftereffects.

So here I was, back in front my local Chipotle’s sofrito-slinger, ordering one each of their new “plant-powered” bowls.

I pick my rice, my beans, and then the requisite sofritos (spicy-smoky tofu crumbles, for the uninitiated) automatically pile on top.

I select my salsa, add lettuce, and then the employee asks if I want sour cream or cheese, which might offend me if I were vegan, but then I realize that he has about as much of a clue as I do regarding what the hell actually makes a Chipotle Vegan or Vegetarian Lifestyle Bowl, and then I just say “no thank you.”

The tab is $15, which I briefly consider as slightly steep given that I basically ordered helpings of glorified rice and beans (tofu is, after all, made from soybeans), but I’m hungry and slightly confused so I sit down.

I’m confused because there’s nothing “new” about Chipotle’s “new” vegan and vegetarian Lifestyle Bowls. No new flavors. No new ingredients. And, as I look around, there’s not even any new fanfare.

Do you remember in the early 2000s when McDonald’s added bacon to its menu? There were commercials. There were in-store promotions. There were banners unfurled. It was as Ronald himself had discovered the pork product and had decided to share the blessing with the world in grand fashion.

I looked around Chipotle and couldn’t even find mention of the new bowls.

I ate half of each meal, left the restaurant, waddled through the parking lot (the Chi-bloat-le effect still present), and contacted a man whom I hoped would help me sort through the perplexity of my experience: Aaron Allen, of Aaron Allen & Associates, a global restaurant consulting and marketing firm.

“Aaron, why do I feel like I’ve been duped in some way? Like I’ve been sold something ‘different’ that is actually very much the same,” I ask him, still tasting those underwhelming lifestyle bowls.

Allen tells me that I’m warranted in feeling this way.

Chipotle’s new CEO Brian Niccoli, came from Taco Bell, where recycling and repackaging ingredients was the norm. From a scale and execution standpoint, Chipotle doesn’t have to bring in any new equipment or teach its employees any new complex procedures. This approached worked for Taco Bell, to an extent, so why wouldn’t it work for Chipotle?

My synapses fire. Connections form. I’m Neo beginning to learn how The Matrix works. I push forward. “Aaron, why now? Why Lifestyle Bowls?”

Allen explains that there are two tectonic plates moving in the world of food.

Two, brands like Chipotle have found that they can find success riding on the recognition and enthusiasm of and for popular new diets, despite whether or not these diets are actually healthy for you.

There’s a halo effect, Allen says, everyone in the restaurant industry is looking for a way to say “healthy” (because if you label a food as such, no one will buy it), and “diet” is a negative word.

This is why other restaurants like Panera use the word “clean.” In Chipotle’s case, “lifestyle” offers a similar misdirect, both to imply that a product is good for you and connected to individual market segments that live according to a set of food rules (Paleo, Keto, Whole30, blah blah blah).

My third eye opens. I’m being re-programmed. I know Kung Fu. I ask one last question, almost afraid of what I’ll find. “Aaron, why didn’t I see any kind of signage at Chipotle about these new bowls? There wasn’t even a mention of them on the menu.”

Allen says that Chipotle likely doesn’t have to put up any in-store advertising, because they’ve already pulled you into the store via advertising.

Chipotle probably knows, through data-mining, that you’re living Paleo, in your third week of Keto, or barely surviving Whole30. And maybe they know that you’re vegan or vegetarian and if, in fact, they do, they may mention to you, through very targeted advertising, that they have a new Lifestyle Bowl you will enjoy very much.

Allen begins talking about neuro-marketing and A.I. and APIs, but I’m only half listening because I’m now understanding where this wild rabbit hole of Chipotle’s Lifestyle Bowls has taken me: Smart brand marketing now happens long before you ever set foot in a restaurant—and you might not even be aware you’re being manipulated by that marketing.

That feeling sits with me after I get off the phone with Allen, and somehow I feel slightly more queasy than I did in the Chipotle parking lot.