The NHS is owed almost £600million in unpaid rent 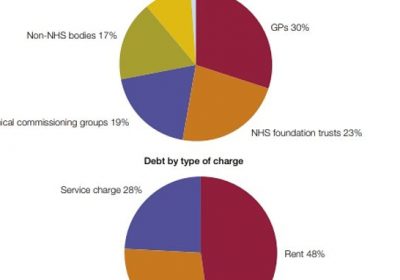 The NHS is owed almost £600million in unpaid rent on the buildings it owns, an investigation has found.

Some 70 per cent of the health service’s tenants – mostly branches of the NHS or GPs – haven’t even signed a lease and it has ‘no power’ to make them sign or to force them to pay rent.

An audit of NHS Property Services, which manages buildings that are rented out or sold, painted a damning picture of the organisation.

It found NHS Property Services makes back just 58p for every £1 it sends bills for – even though most of its tenants are just other parts of the NHS.

A massive £110million in debt dating back to 2014 has just been written off by the body because it failed to claim it back.

However, the British Medical Association hit back at how much blame was aimed at GPs, saying they were right to not pay ‘astronomical fees’ which could damage their business. 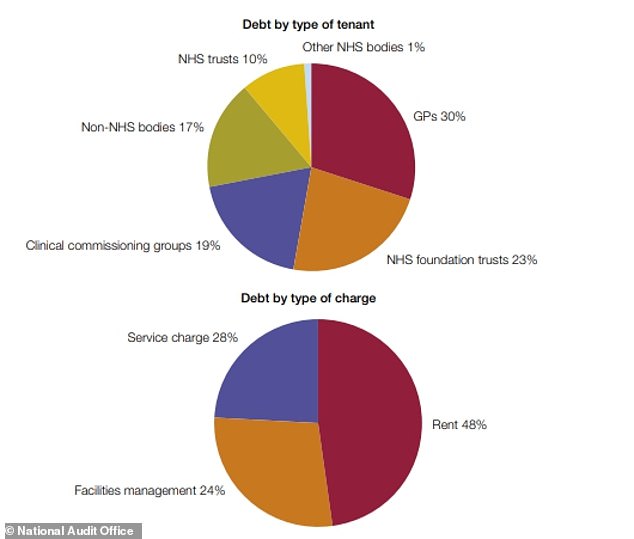 The National Audit Office’s breakdown showed GP surgeries – which are privately owned by NHS-funded – make up the largest single proportion of problematic tenants, accounting for 30 per cent of unpaid funds

The National Audit Office revealed the figures in its report on NHS Property Services, which was set up in 2011.

‘More than eight years after being created it still lacks the powers it needs to run its affairs effectively, and the accuracy of bills is still disputed,’ the report said.

‘In our view, too many NHS organisations and GPs seem to regard paying for their premises as optional, with almost £700million either written off or still unpaid.

‘The system for charging for NHS property is not working effectively and the department urgently needs to address the fundamental causes of this unsatisfactory situation.’

The NHS Property Services’ biggest chunk of debt (30 per cent) is from GP practices refusing to pay their bills.

NHS foundation trusts – which run hospitals – are responsible for 23 per cent of the debt, and clinical commissioning groups – local health boards – for 19 per cent.

Leading doctors have threatened to sue the NHS if no action is taken over ‘astronomical rises’ in GP practice service fees in the wake of the NAO report.

The British Medical Association (BMA) said it has written to NHS Property Services requesting an urgent response, with many family doctors concerned they cannot meet the costs of buildings they rent from the health service.

Legal action will be considered if the problem is not addressed, the doctors’ trade union said.

Over the last three years, practices leasing their surgeries from NHS Property Services have seen their fees rise without agreement, the BMA said.

Some have also reportedly been charged for services they do not get, while others have not been provided with a breakdown of what charges relate to.

Dr Richard Vautrey, GP committee England chairman, will say at a conference today: ‘For years now some practices have faced astronomical rises in service charges, some seeing theirs more than double, often for services they have not asked for and do not receive.

‘This is unacceptable and cannot be allowed to continue.

‘And so I can tell you today that the BMA has sent a letter of claim to NHS Property Services and if they do not give us an acceptable response we intend to take them to court, and we intend to win.’

Only 17 per cent of the £576million owed to NHS Property Services is from private companies.

The organisation has never made a profit or broken even since it was founded, and has made financial losses of more than £1billion in the past eight years.

Its seven directors, however, were given a total of £206,000 in bonuses last year.

‘This system doesn’t seem to be working very well, and at the end of the day its taxpayers who are missing out,’ said John O’Connell of the TaxPayers’ Alliance.

‘When bills to the NHS aren’t paid on time or not at all, there is less money in the budget for front line services.

‘The priority for the NHS has to be patient care and every single penny spent needs to be focused on that goal.’

NHS Property Services is responsible for managing 2,900 buildings around the country with an estimated value of £3.8billion and 6,950 tenants.

Many of the tenants don’t have officially signed leases because they had been there before Property Services was formed, the NAO said, and the organisation has no way to force them to sign one.

But doctors hit back against the large proportion of blame levelled at GP surgeries.

The British Medical Association’s Dr Richard Vautrey said: ‘Problems with practice premises and the financial pressures that go alongside owning or leasing surgery buildings are constant frustrations for hardworking GPs, and have an important negative impact on GP recruitment and retention.

‘Specifically, in recent years, GPs leasing buildings from NHS Property Services have seen their service and maintenance fees rise astronomically with no agreement and no proper explanation.

‘It is only right then, that GPs do not pay these fees that could risk the very future of their practices and the ability to provide care for patients.’

Any action against tenants which aren’t part of the NHS must be individually signed off by the Department of Health and Social Care.

The chair of NHSPS, Ian Ellis, said it ‘welcomed’ the report, claiming it ‘makes clear the positive impact the organisation’s management team and its strategic business plan is having on strategic estates and facilities management’.

He added: ‘The report comments on some of the legacy issues NHSPS has inherited from operating in the widespread absence of formal rental and service agreements and the significant impact this has had on the company’s ability to: agree charges with customers for accommodation and services provided, reduce billing disputes and recover outstanding debts.

‘We fully acknowledge that whilst improvements have been made, these have been at a slower pace than we wanted but support is also required from the broader health system to fully address this.

‘We are committed to working across the stakeholder community to implement systemic fixes.’