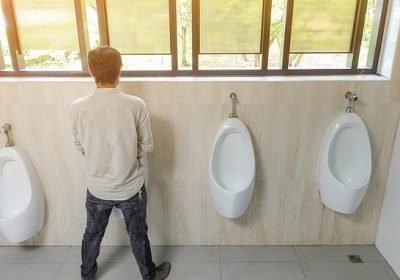 The 15-minute prostate fix that can be done in a walk-in clinic… which means no more endless dashes to the loo!

A British man has become the first patient in Europe to undergo ‘walk-in, walk-out’ prostate surgery – carried out while he was wide awake in an outpatient clinic. The procedure, for an enlarged prostate, requires only a local anaesthetic and the 76-year-old patient was allowed home just hours later.

It’s hoped the procedure will soon be offered at community clinics, benefiting thousands of men with prostate problems.

Those suffering from prostate enlargement, also known as benign prostatic hyperplasia (BPH), are currently offered major surgery as a last resort, which is effective but can cause loss of sexual function, bleeding and incontinence. Some are too frail for the operation, which is called transurethral resection of the prostate, or TURP.

Others, understandably, are simply unwilling – up to 42 per cent of those needing it delay it due to fears about complications. The TURP operation can mean three nights in hospital. 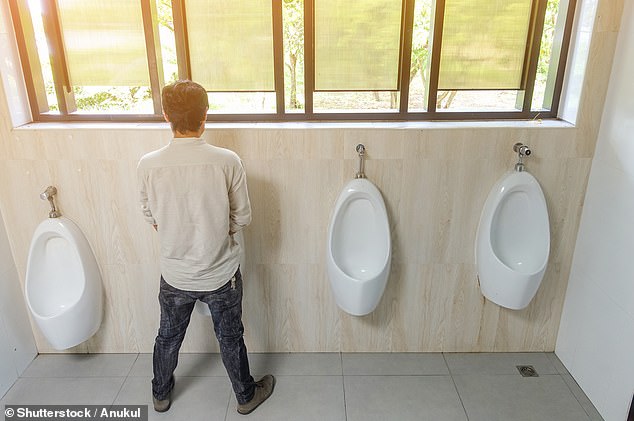 The new treatment will hopefully mean no more rushed trips to the toilet (a man using a urinal, pictured above)

The new procedure, called UroLift, has been available for about ten years but this is the first time it has been carried out as a walk-in, walk-out case, with no need for an operating theatre or an overnight stay.

The new operation was offered to John Penny, from Thornton, near Crosby on Merseyside. He had had BPH for a decade, getting up five or six times a night to go to the toilet.

John kept postponing his operation because a traumatic surgical experience in his teens left him terrified of going under the knife. ‘I nearly died having my appendix out when I was 18,’ recalls John. ‘Every time I go into hospital, my blood pressure, which is usually absolutely healthy, shoots up.’

Now, eight months after the UroLift procedure, his symptoms have eased considerably and he is sleeping much better.

The prostate, a walnut-size gland, sits beneath the bladder and is essential for producing components of semen. An enlarged prostate is not linked to cancer – yet the symptoms are similar, so men with the problem are tested to make sure their prostate is not cancerous.

Although two million men in Britain have been diagnosed with BPH, it is thought to affect as many as half of those over 50, and 60 per cent of those over 60. Many suffer symptoms without realising the cause.

The most common sign is a frequent, urgent need to urinate, even throughout the night. An overgrown prostate can press into the bladder – leading to urgency – but also blocks the urethra, the tube through which it empties. As a result, men often find they are unable to go, even when they are desperate to.

Enlarged prostates are thought to be linked to hormonal changes as a man gets older. John recalls: ‘About ten years ago, I starting having difficulty peeing. My GP told me I had an enlargement of the prostate, due to my age, and put me on tablets. Things did improve but I was still waking five times a night, so I never got a proper night’s sleep. I even moved out of the bedroom, as I was disturbing my wife Lorraine.

‘It was very stressful. It takes over your life because it is constantly on your mind.’

Treatment for BPH usually begins with medication to relax the bladder muscles and shrink the prostate. John was told he needed TURP surgery – carried out on some 18,000 men a year in the UK – when he began to worry that wouldn’t be able to go to the lavatory at all.

He says: ‘My GP again asked me to think very carefully about surgery, but I was very nervous.’

In the meantime, he read an article in a newspaper about UroLift, which described how it was done as a day case under a local anaesthetic. After showing the newspaper clipping to his GP, John was referred to urologist consultant surgeon Marc Lucky at Aintree University Hospital, who offered the procedure. 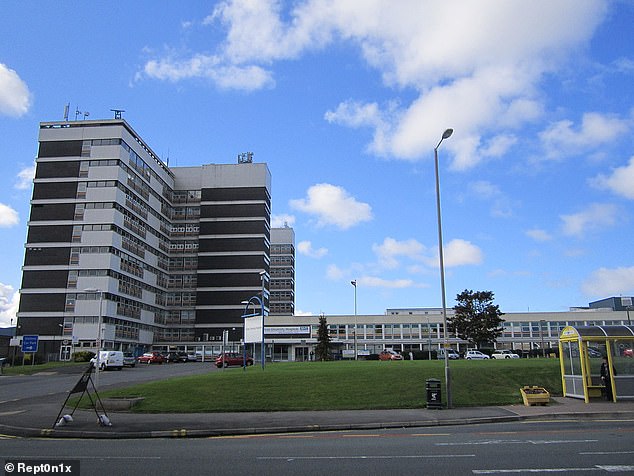 Mr Lucky says: ‘It’s been available as day case surgery on the NHS since last year and has far fewer complications than TURP. It involves no cutting or incisions, and men who may have heart problems that make them unsuitable for major surgery can have it.

‘It is a huge development, and means we could see community clinics offering it in the not- too-distant future, meaning that patients could be treated without even visiting hospital.’

The UroLift device itself is a handpiece – a little like a gun, with a trigger – with a long, fine metal tube on the end.

The tube goes through the sheath to where the prostate is enlarged and the trigger pulled to fire a tiny clip into the organ, anchoring it to the tissues beside it. This ‘lifts’ the gland away from the urethra, allowing urine to flow again.

Several clips can be used – John had three – and the operation can be repeated if necessary.

Consultant urologist Professor Roger Kirby, director of The Prostate Centre, London, welcomed the advance, saying: ‘UroLift is better at preserving sexual function than other procedures, and now it can be done without a hospital admission, which will provide a cost-saving to the NHS.

‘It doesn’t work so well for very large prostates as the tiny implants [clips] may not be able to hold the tissue back. In these cases, a type of laser treatment may be a better alternative. UroLift is still relatively new, so we don’t totally know how durable the procedure is. But it looks promising.’

John recalls: ‘I was quite nervous but I couldn’t believe I was only in there for 15 minutes.’

He was home later the same day. ‘It’s been a vast improvement,’ he says. ‘I’d recommend it. It hardly feels like you’re having a serious operation.’

WHAT IS PROSTATE CANCER?

How many people does it kill?

It means prostate cancer is behind only lung and bowel in terms of how many people it kills in Britain. In the US, the disease kills 26,000 each year.

Despite this, it receives less than half the research funding of breast cancer – while treatments for the disease are trailing at least a decade behind.

How quickly does it develop?

Prostate cancer usually develops slowly, so there may be no signs someone has it for many years, according to the NHS.

If the cancer is at an early stage and not causing symptoms, a policy of ‘watchful waiting’ or ‘active surveillance’ may be adopted.

Some patients can be cured if the disease is treated in the early stages.

But if it diagnosed at a later stage, when it has spread, then it becomes terminal and treatment revolves around relieving symptoms.

Thousands of men are put off seeking a diagnosis because of the known side effects from treatment, including erectile dysfunction.

Tests for prostate cancer are haphazard, with accurate tools only just beginning to emerge.

There is no national prostate screening programme as for years the tests have been too inaccurate.

Doctors struggle to distinguish between aggressive and less serious tumours, making it hard to decide on treatment.

Men over 50 are eligible for a ‘PSA’ blood test which gives doctors a rough idea of whether a patient is at risk.

But it is unreliable. Patients who get a positive result are usually given a biopsy which is also not foolproof.

Scientists are unsure as to what causes prostate cancer, but age, obesity and a lack of exercise are known risks.

Anyone with any concerns can speak to Prostate Cancer UK’s specialist nurses on 0800 074 8383 or visit prostatecanceruk.org