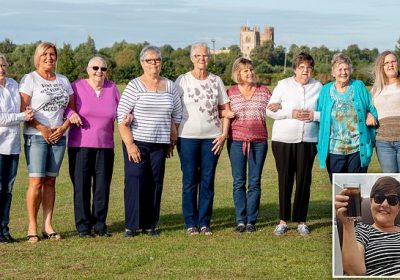 The family who beat breast cancer: 10 female relatives who ALL recovered from the disease say they survived because they ‘fought it together’

Ten women from the same family who have beat breast cancer are celebrating by launching a calendar.

The family, all of whom are from Lincolnshire and are between 47 and 81, include eight blood relatives.

Joyce Waite, 78, was the first to be diagnosed with the killer disease in 2002. Her sister-in-laws and daughters went on to face the same fate.

After 15 years, it came to an end when Joyce’s nephew’s partner Jane Reeson, 54, had a successful mastectomy in 2017.

Calendar organiser Vanessa Haw, 55, who was diagnosed in 2015, said: ‘Even on the worst days, you knew there was life, there was hope.’ 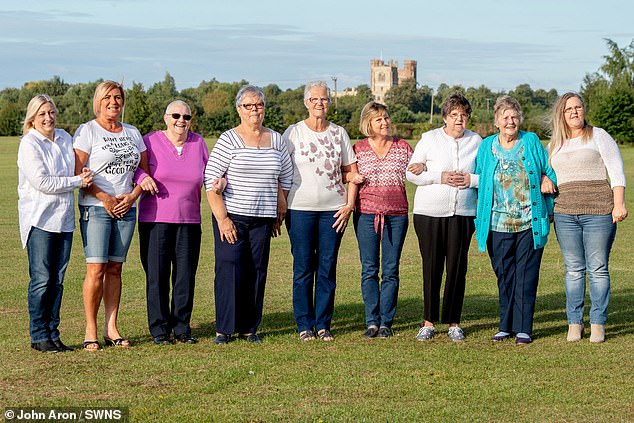 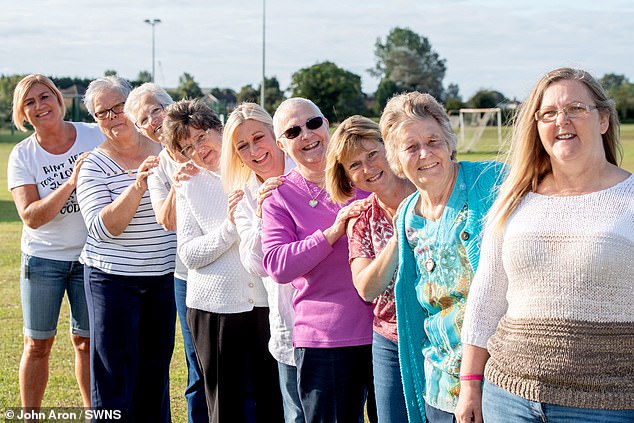 The survivors, aged from 47 to 81 and including eight blood relatives, won their battle after 15 years, with the first diagnosis in 2002, and the last mastectomy in 2017 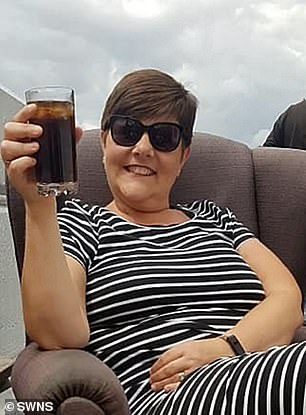 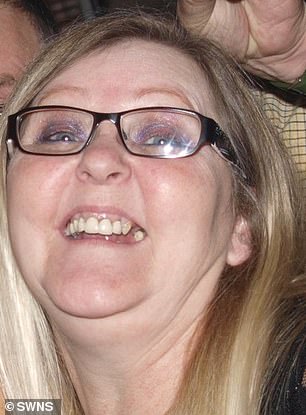 Trudie Smart, 47, who did not attend the photoshoot, was diagnosed with breast cancer in April 2008. She had her ovaries removed as part of her treatment

Vanessa, a shop owner, said: ‘The fact ten of us have gone through it has been a huge help.

‘We’re a close family so we’ve been there for each other. We’ve all fought cancer together as a family and shared our experiences with each other which has really helped.

‘That support and knowing someone had breast cancer but survived has been brilliant.’

Around 270,000 American women an 55,200 British women are diagnosed with invasive breast cancer every year, figures show.

Breast cancer survival in the UK has doubled in the last 40 years, according to Cancer Research UK.

Vanessa, who has four children and eight great-grandchildren, had her last yearly mammogram in April 2015 and got called back to have a deep core biopsy.

She said: ‘I got diagnosed with breast cancer four days later.’

In 2015, Vanessa had a left-sided mastectomy and had all lymph nodes removed from her left arm.

She had two more operations to remove damaged skin and underwent a right mastectomy in October 2016 as a precaution.

Vanessa refused radiotherapy because of how it affected her mother, Barbara Limb, 81. 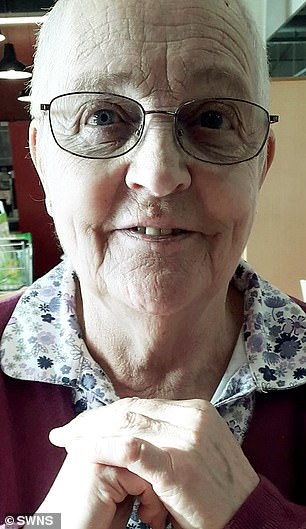 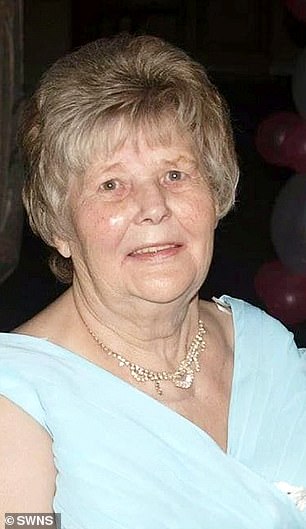 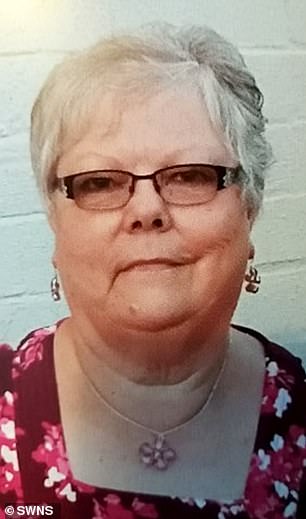 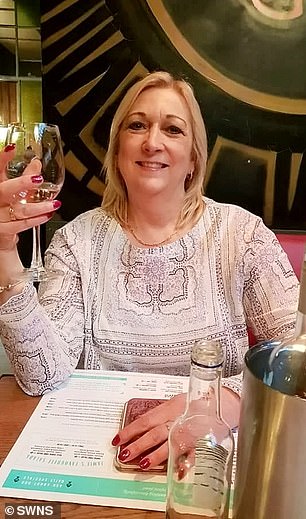 Ms Hill, a mother-of-one, had chemotherapy before undergoing a partial mastectomy

After Joyce’s diagnosis in 2002, her sister-in-law, Barbara, was the second woman in the family to be diagnosed with cancer.

Barbara, a retired care home worker, who has five grandchildren and eight great-grandchildren, went to her GP in July 2003 after experiencing breast pain.

She was referred to Grantham Hospital and had a mammogram and two biopsies before being diagnosed with breast cancer.

Barbara had been recommended by a friend to visit her GP because she was experiencing pain. She said: ‘She [the friend] made me go to the GP that afternoon.

‘The doctor saw me and got in touch with the local hospital and the next week they did a mammogram and a biopsy on the same day.

‘The doctor said that there was something there but they bad missed it so I had to return for a second biopsy and the results confirmed I had breast cancer.’

Barbara had an operation on August 19, 2003, to remove lymph nodes and a lumpectomy.

Barbara said: ‘This was followed by a full course of radiotherapy which still burns me all these years later. But I’m a survivor.’

Despite not being a blood-relative, Barbara’s son’s partner Lorraine Hill, 61, was diagnosed after finding a large lump in her breast in 2005.

The barmaid and mother-of-one had chemotherapy to shrink the tumour before undergoing a partial mastectomy.

Trudie Smart, 47, Barbara’s niece, was next to be diagnosed with breast cancer in April 2008.

She had eight cycles of chemotherapy before having a mastectomy in November that year followed by three weeks of radiotherapy.

The teaching assistant said: ‘My breast cancer was ER+ which meant I produced too much estrogen so I opted to have my ovaries removed.’

Just months after her diagnosis, her mother, Shirley Limb, 72, was diagnosed in September 2008. 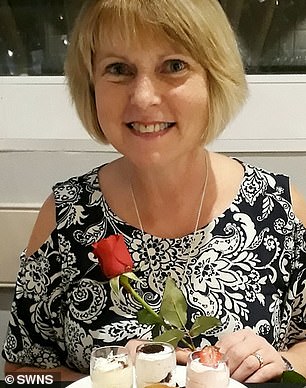 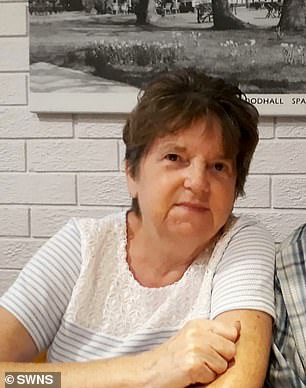 Ms Holland said: ‘I just took it all in my stride and got on with life’ 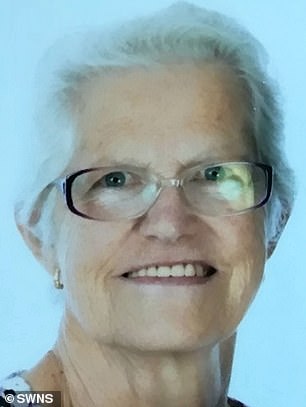 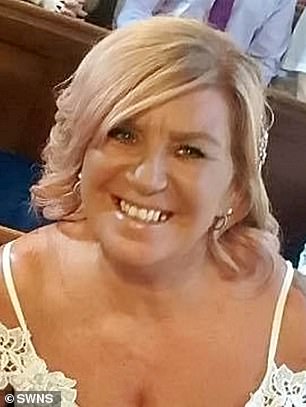 WHO IS ELIGIBLE FOR BREAST CANCER SCREENING AND HOW DOES IT WORK?

What is breast cancer screening?

Screening is a procedure which allows doctors to catch breast cancer while it is still in its infancy and therefore easier to treat.

It involves an X-ray test – known as a mammogram – to check for signs of cancer which are too small to see or feel.

The results of the mammogram will be sent to the women and her GP within two weeks. Around 5 per cent will be called back for further tests.

Any woman concerned that they might have breast cancer can see their GP and be referred for a screening.

But in recognition that the risk of getting breast cancer increases with age, all women aged between 50 and 70 who are registered with a GP should automatically be invited for screening every three years.

Women are first invited for screening between their 50th and 53rd birthday, although in some areas they are invited from age 47 as part of a trial.

How are they invited?

The screening process is overseen by Public Health England, which uses an IT system to send out invitations.

Shirley, who has three grown-up children, six grandchildren and two great-grandchildren, was given the news following a routine mammogram.

An ultra-sound and biopsy confirmed she had breast cancer and she had a lumpectomy and lymph nodes removed just before Christmas that year.

She then had radiotherapy every day for three weeks and was told she was in remission in the summer of 2009.

Mary Limb, another sister-in-law of Joyce, was told she had breast cancer in 2012 after doctors found a lump.

She was in hospital for four days after her operation to remove the lump and lymph nodes followed by radiotherapy.

Mary’s daughter, Hazel Holland, 53, was also struck down when she had mammogram in February 2015.

The mother-of-two and breakfast club supervisor had an operation in March that year to remove a lump and lymph nodes, followed by chemotherapy and radiotherapy.

She said: ‘I just took it all in my stride and got on with life.’

The mother-of-three had a lumpectomy the next month and following four weeks of gruelling radiotherapy was declared cancer free.

A month later, in October 2017, her son David’s partner Jane Reeson, 54, was dealt a devastating blow when she was diagnosed with cancer.

The delivery driver and mother-of-two children had a mastectomy on her left side in November that year.

She has been told to take estrogen-blocker Tamoxifen for five years but so far all tests have come back clear.

She said: ‘I couldn’t feel a lump at all, so if it hadn’t been for the mammogram it could have been a different story.

‘Obviously knowing what many members of the family had gone through meant I was conscious of the importance of getting regular check-ups.’

The family’s calendar will be officially launched next month with all proceeds going to the charity Breast Cancer Care.

The calendar images, which were group shots taken around Lincolnshire, are currently being approved by the charity, Breast Cancer Care.

It will cost £9.99, and will be for sale is Vanessa’s shop, Party Palace in Coningsby.

HOW TO CHECK YOUR BREASTS

What to look out for

This is why it is so important to feel AND look at you r boobs. Dimpling and puckering of the skin can look similar to orange peel

It is important to check not just your boob but your upper chest and armpit too, as these areas also contain breast tissue

This is liquid that comes from the nipple without squeezing it

Most women may naturally have one boob bigger than the other or experience their boobs gradually changing as they get older.

Many changes are perfectly normal, however if you notice a sudden, unusual change in size or shape then get it checked out

All this means is your nipple has become pulled into the boob or looks different to usual. This could be a change in its position or shape. That’s why it is important to pay special attention to your nipple during your regular checks

There are many reasons why your skin could become irritated, especially if you are breast feeding, but if you notice any redness or a rash on the skin and/or around the nipple or any crusting of the nipple, make sure you get it checked out by your doctor

What to feel for

Some boobs are naturally lumpy and this can be perfectly normal. The key is to get to know how your boobs feel, so you would notice if any new lumps appear or if your boob starts to feel thicker in one area compared to the rest

Some breast pain can be perfectly normal, especially around your period. But keep an eye out for any unexplained pain in your breast or your armpit that’s there all or almost all of the time