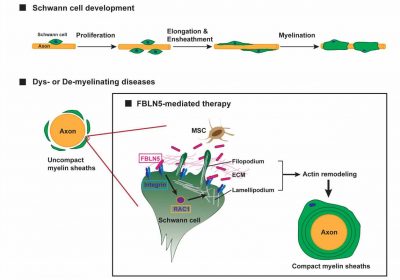 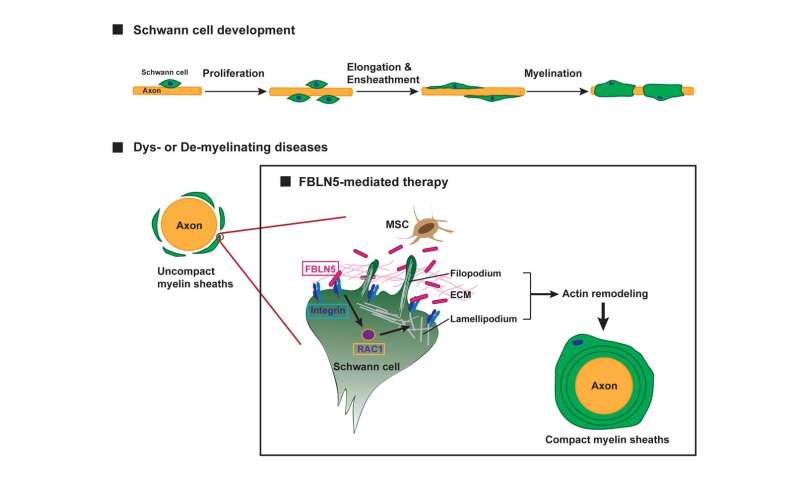 A study released today in STEM CELLS may point to a new treatment for myelin-related disorders including Charcot-Marie-Tooth (CMT) disease. The study demonstrates that fibulin 5, a protein secreted by human Wharton’s jelly-derived mesenchymal stem cells (WJ-MSCs), plays an important role in the development of Schwann cells in the peripheral nervous system (PNS).

“This information suggests that WJ-MSCs can be a potent treatment for myelin-related diseases, including CMTs,” said Ji Eun Lee, Ph.D., of the Samsung Advanced Institute for Health Sciences & Technology at Sungkyunkwan University (SKKU). She and Jong Wook Chang, Ph.D., of the Stem Cell & Regenerative Medicine Institute, Samsung Medical Center (SMC), were co-authors of the study. Other research team members included SKKU and SMC colleagues along with scientists from Kongju National University. Their work was focused on finding a treatment for CMT.

Affecting one in every 2,500 people worldwide, CMT comprises a group of inherited genetic disorders leading to nerve damage and smaller, weaker muscles. It results when the myelin sheaths of axons in the PNS—important for the fast and proper transmission of nerve impulses—are impaired. While the most severe cases are typically manifested in foot abnormalities and difficulty walking, patients might also experience trouble with breathing, swallowing or speaking if the muscles that control these functions are impacted.

“No effective treatments for CMTs have been developed to date,” Dr. Lee said. “These factors led us to investigate mesenchymal stem cells-based therapies.”

Although mesenchymal stem cells (MSCs) have limitations such as difficulty in transplantation and a possibility of becoming cancer cells, they are gaining attention as an alternative treatment because of their ability to differentiate into various types of cells and to suppress inflammation-induced immune response. MSCs are effective in repairing damaged cells by promoting cell proliferation or preventing cell death in various types of cells.

The therapeutic effects of MSCs are mainly due to paracrine factors acting on disease-related targets or adjacent cells. Recent studies have identified significant proteins among paracrine factors and demonstrated that recombinant proteins have therapeutic effects comparable to MSCs in several disease model systems. Other studies have reported that a protein called fibulin 5 (FBLN5) is associated with the proliferation of several types of cells, such as smooth muscle cells.

“This all led us to surmise that uncovering key paracrine factors affecting Schwann cells may offer an alternative approach to developing targeted treatment of myelin-related diseases,” Dr. Chang said. Schwann cells are vital to a healthy PNS as they produce the myelin sheath surrounding neuronal axons. Their main role is to insulate (myelinate) and supply nutrients to individual nerve fibers (axons) of the PNS neurons.

During the course of their study, conducted on zebrafish, the team able to identify FBLN5 as a key paracrine factor and demonstrate that it is important for the proliferation of Schwann cells, too.

“Our next goal is to uncover the mechanism by which FBLN5 regulates ERK activation, and particularly to explore role of FBLN5 in the ERK-dependent recovery of impaired Schwann cells,” Dr. Lee said.