Stronger muscles in three seconds a day? Experts weigh in 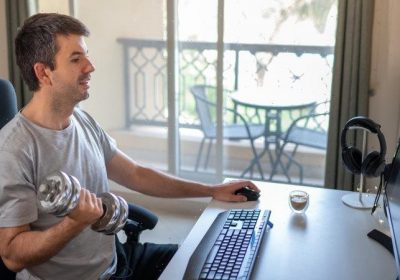 That question was at the heart of a small-scale new study of almost comically brief weight training. In the study, men and women who contracted their arm muscles as hard as possible for a total of three seconds a day increased their biceps strength by as much as 12 per cent after a month. 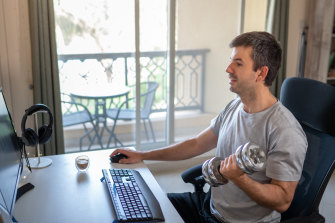 Literally seconds away from stronger arms.Credit:iStock

The findings add to mounting evidence that even tiny amounts of exercise — provided they are intense enough — can aid health. I have written about the unique ways in which our muscles, hearts, lungs and other body parts respond to four seconds of strenuous biking, for instance, or 10 seconds of all-out sprinting, and how such super short workouts can trigger the biological responses that lead to better fitness.

But almost all of this research focused on aerobic exercise and usually involved interval training, a workout in which spurts of hard, fast exertion are repeated and interspersed with rest. Far less research has delved into super brief weight training or whether a single, eyeblink-length session of intense resistance exercise might build strength or just waste valuable seconds of our lives.

So, for the new study, which was published in February in the Scandinavian Journal of Medicine & Science in Sports, scientists led by Masatoshi Nakamura at the Niigata University of Health and Welfare in Niigata, Japan, asked 39 sedentary but otherwise healthy college students to do three seconds of weight training every day. They recruited an additional 10 students who would not work out to serve as a control group.

The exercising volunteers gathered during the workweek at the lab for strength testing and weightlifting, of a kind. They sat at a machine called an isokinetic dynamometer, which has a long lever arm that can be pushed and pulled, up or down, with varying levels of resistance, allowing researchers to precisely control people’s movements and effort.

The volunteers manipulated the weighted lever with all their strength, straining and contracting their biceps to the fullest possible extent. Some of the participants slowly lifted the lever’s weight, like curling a dumbbell, producing what is called a concentric contraction, meaning the biceps shortened as they worked. Other volunteers slowly lowered the lever, creating a so-called eccentric contraction. You get an eccentric contraction when you lengthen a muscle, like lowering a dumbbell during a curl, and it tends to be more draining. A third group of volunteers held the lever’s weight steady in midair, fighting gravity, in a type of contraction where the muscle doesn’t change length at all.

And each of the participants did their biceps exercise for a total of three seconds.

That was it; that was their entire daily workout. They repeated this exceedingly brief exercise routine once a day, five times a week, for a month, for a grand total of 60 seconds of weight training. They did not otherwise exercise.

At the end of the month, the researchers retested everyone’s arm strength.

Those three-second sessions had changed people’s biceps. The groups either lifting or holding the weights were 6 per cent to 7 per cent stronger. But those doing eccentric contractions, lowering the lever downward as you might ease a dumbbell away from your shoulder, showed substantially greater gains. Their biceps muscles were nearly 12 per cent stronger overall.

These improvements may sound slight, but they would be biologically meaningful, especially for people new to weight training, said Ken Nosaka, a professor of exercise and sports science at Edith Cowan University in Joondalup, Australia, who collaborated on the study. “Many people do not do any resistance training,” and starting with very short workouts may be an effective way for them to begin a strength training regimen, Nosaka said. “Every muscle contraction counts” and contributes to building strength, assuming you lift a weight near the maximum you can handle and it lasts at least three seconds, he said.

The three-second workout could also be useful as a stopgap to help maintain or even add to our arm strength for those of us who are buried under work or family commitments and are unable to get to the gym.

The exercise routine is easy enough to re-create at home, Nosaka said, no dynamometer needed. Just find a dumbbell that feels heavy — you might start with a 4kg version, for instance, if you are new to weight training. “Lift it with both hands,” Nosaka said, to start a biceps curl, then “lower it with one hand” through a count of three seconds to complete a short, sharp and draining eccentric contraction.

This approach, though, has some obvious limitations. While the volunteers in the study got stronger, they did not add muscle mass. “Strength is only one outcome” of resistance exercise, said Jonathan Little, a professor of health and exercise science at the University of British Columbia in Kelowna, who has studied brief workouts but was not involved with this experiment. More traditional weight training typically also bulks up muscles, which has additional benefits for metabolism and other aspects of health and wellness over the long term.

This article originally appeared in The New York Times.

Make the most of your health, relationships, fitness and nutrition with our Live Well newsletter. Get it in your inbox every Monday.

Most Viewed in Lifestyle