Home » Health News » Stroke: Three types of meat shown to significantly increase your levels by up to 28%

Stroke: Three types of meat shown to significantly increase your levels by up to 28% 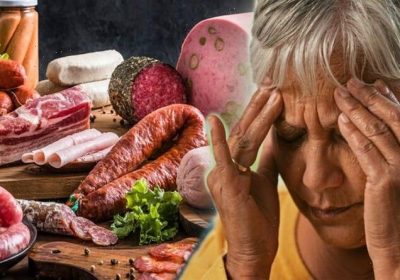 There are around 1.3 million stroke survivors in the UK, and your symptoms will depend on the part of your brain affected and the extent of the damage. Diet can hold a high hand when it comes to increased risk factors particularly any of these types of meat.

According to the NHS, cured meats like salami, chorizo and pancetta could raise your risk of a stroke.

“Many processed meats are high in salt and saturated fat, and low in vegetable fat, said Professor Alice Lichtenstein, a nutritionist at Tufts University.

Frequently consuming red meat appears to increase the risk of stroke significantly, while choosing to eat poultry and other proteins, such as fish or nuts, lowers the risk, according to a study by researchers at Harvard School of Public Health (HSPH) and the Cleveland Clinic.

The study found that men who ate more than two red meat servings daily had a 28 percent higher stroke risk than those who ate about one-third of a serving each day.

People who ate the most chicken or turkey each day had a 13 percent reduced stroke risk than those who ate about one daily serving of red meat.

The investigators also found that substituting other proteins, such as nuts or fish, for one daily serving of red meat reduced stroke risk.

What is processed and red meat?

Processed meat describes meat products altered in some way to preserve or flavour them.

This processing entails anything from salting, curing, smoking to fermenting.

In terms of your shopping, this includes beloved sausages, bacon and ham.

Red meat is a common term used for beef, lamb and pork.

A diet that is considered as one of the healthiest and includes little to no red meat is the Mediterranean diet.

It’s also characterised by a rich use of olive oil, which represents an unsaturated type of fat.

The Mediterranean diet also allows for fish, which might be a healthier meat option compared to processed meat.

The NHS says the main stroke symptoms include changes to the face. Your face may have dropped on one side, the person may not be able to smile, or their mouth or eye may have drooped.

Signs may also occur on the arms – “the person may not be able to lift both arms and keep them there because of weakness or numbness in one arm”, says the NHS.

Their speech may be slurred or garbled, “or the person may not be able to talk at all despite appearing to be awake” and “they may also have problems understanding what you’re saying to them”, adds the health body.

If you suspect you or someone else is having a stroke, phone 999 immediately and ask for an ambulance.