Home » Health News » Stroke: The signs round the eyes that could foreshadow an incident

Stroke: The signs round the eyes that could foreshadow an incident 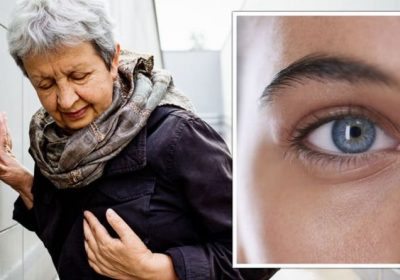 Scientists have warned that the fleeting symptoms of a mini-stroke could be a harbinger for a more serious stroke. It is estimated about one in three people who have a transient ischaemic attack – or mini stroke – will eventually have an acute incident. The effect of a transient attack on the brain, however, can be just as damaging as a severe stroke. What’s more, transient ischaemic attacks often go undetected in brain scans. Doctor Clare O’Donnell, Optometrist and Head of Research at specialist eye hospital Optegra Eye Health Care, warns that four signs around the eyes that could be symptoms of a mini-stroke.

Sudden changes in vision, including blurriness or dark areas, could be caused by a blockage in the blood vessel leading to the eye.

In fact, it is possible that some transient ischaemic attacks could only affect the eyes, causing temporary loss of vision.

Doctor O’Donnell explained: “A stroke occurs when the blood supply to a part of the brain is suddenly disrupted. It is an emergency and loss of vision is one of a number of symptoms.

“Symptoms of a mini-stroke can include temporary disturbances, so sudden loss of vision in one or both eyes should always prompt urgent investigation for treatment as the risk of a full stroke is increased substantially, particularly in the hours and days following a transient ischaemic attack.”

It is common for people to experience some degree of vision loss after an acute stroke, with acute events often affecting the way the brain processes information it receives from the eyes.

Doctor O’Donnell noted: “Additionally, after a stroke up to 60 percent of survivors may have vision problems such as those listed below and the optometrist has a key role to play in recognising the way the eye can be affected.

“Also, as the eye is the only body part where we can look directly at the blog vessels and follow any changes, optometrists are able to spot signs of high blood pressure, which is a known risk factor for stroke.

“In fact, the signs at the back of the eye can reflect or mimic the changes taking place in the brain.

“After stroke there may be loss of a part of the visual field – the entire central and peripheral area we can see – because the areas of the brain responsible for vision have been damaged.

“Another type of field loss may affect central vision in one eye, usually presenting as sudden loss of sight in the affected eye. This can be due to a type of stroke affecting the retina at the back of the eye.”

Studies have highlighted that the transient nature of the symptoms by no means lessens the impact of the condition.

Evidence shows that blocking a single arteriole can cause cell death in all directions for hundreds of micrometers after a blockage.

Further blockages could potentially known out entire brain regions, as the damage travels to areas fed by in vessels still in tact.

If the sudden symptoms appear, urgent treatment could reduce the risk of a subsequent stroke.

A 2016 study found that quickly taking an aspiring after a mini stroke could quickly avert the risk of death and disability.

Doctor O’Donnell added: “Sudden loss of vision should prompt a visit to your local A&E straight away. If the nerve controlling the eye’s muscles has been affected, this can cause blurred of double vision, or difficulty focussing on objects because the eyes are not always able to keep still.

“Some people after stroke have difficulty in processing information coming from the eyes. This can result in difficulty recognising colours, once family faces or objects.

“Shadows and hallucinations can even occur where people ‘see’ moving shadows, shapes or objects appears in the affected area of the visual field.”