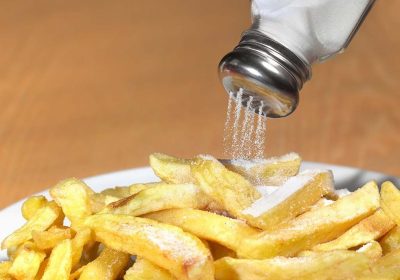 Heart disease is a major killer that claims more than 160,000 lives each year in the UK alone. With this in mind, research continues to uncover new effective ways to modify your risk of the culprit. A latest endeavour in this field suggests it could be as easy as using less salt.

Whether it’s the main ingredient in your sauce or an extra seasoning sprinkled on your chips, salt is the simplest and most effective flavouring agent out there.

From readily salted crisps to smoked salmon, the common seasoning can flavour as well as preserve various foods.

A new study, published in the Journal of the American College of Cardiology, found that putting less salt on your meals could reduce your risk of heart disease and heart failure.

READ MORE: Acholic stools are ‘the most common’ sign of pancreatic cancer in ‘initial’ stages

Previous research has tied salt to higher levels of blood pressure, which is a condition that represents a major risk factor for cardiovascular diseases.

In fact, Blood Pressure UK warns that eating too much of the popular ingredient is “the single biggest cause of high blood pressure” out there.

However, recent studies suggest that the frequency at which you add salt to your foods could be used to predict your individual sodium intake over time.

Lu Qi, Professor at the School of Public Health and Tropical Medicine at Tulane University in New Orleans, said: “Overall, we found that people who don’t shake on a little additional salt to their foods very often had a much lower risk of heart disease events, regardless of lifestyle factors and pre-existing disease.

“We also found that when patients combine a DASH diet [a food plan rich in vegetables, fruits and whole grains] with a low frequency of adding salt, they had the lowest heart disease risk.

“This is meaningful as reducing additional salt to food, not removing salt entirely, is an incredibly modifiable risk factor that we can hopefully encourage our patients to make without much sacrifice.”

Looking at 176,570 participants from the UK Biobank, the researchers looked at whether frequency of using salt was linked to a heart disease risk.

The study used a questionnaire to collect this data, which included questions about major dietary changes in the last five years.

Overall, people who used less salt in their foods were more likely to be: women; white; have a lower body mass index; more likely to have moderate alcohol consumption; less likely to be current smokers; and more physically active.

They also had a higher prevalence of high blood pressure and chronic kidney disease, and were more likely to adhere to a DASH-style diet.

Furthermore, the team found the association of adding salt to foods with heart disease risk was stronger in participants of lower socioeconomic status.

Sara Ghoneim, a gastroenterology fellow at the University of Nebraska Medical Center, penned this “promising” study alludes to the potential impact of long-term salt preferences on total cardiovascular risk.

Ghoneim added: “A major limitation of the study is the self-reported frequency of adding salt to foods and the enrolment of participants only from the UK, limiting generalisability to other populations with different eating behaviours.

“The findings of the present study are encouraging and are poised to expand our understanding of salt-related behavioural interventions on cardiovascular health.”

While the study was limited, research tends to agree that too much salt is not good for your blood pressure.

According to the NHS, adults shouldn’t consume more than six grams of salt a day, which is the equivalent of one teaspoon.

Furthermore, Blood Pressure UK highlights that salt doesn’t only come from your salt shaker as foods you buy in a grocery store often pack large amounts of the common seasoning. That’s why the charity urges looking at labels when shopping.