Scottish hospital can now do hip replacements in a DAY 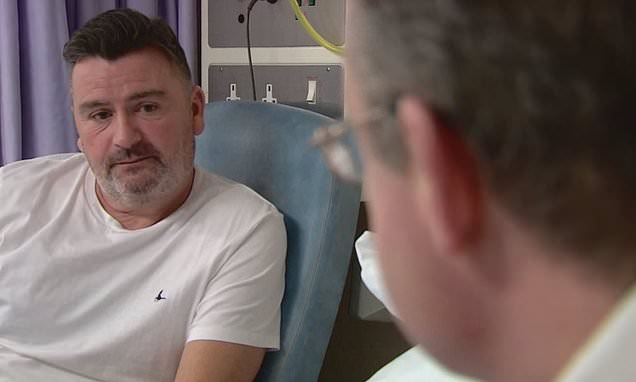 Hip replacements in a DAY: Scottish health board becomes the first to offer the procedure in hope of relieving pressure on the stretched NHS

An NHS hospital in Scotland has become the first in the UK to offer one-day hip replacement surgery.

The Fife health board – which runs the Victoria Hospital in Kirkcaldy, near Edinburgh – can now have patients back on their feet just hours after the major surgery.

On average, hip replacement patients spend around four days in hospital. But the procedure allows patients to be discharged within 12 hours.

Recovery time is shortened by using anaesthetic on a smaller area of the body, meaning feeling and movement returns to people’s legs faster.

Surgeons say it will make a ‘huge difference for the patient’ and allow them to get back to walking, driving and working quicker than usual. 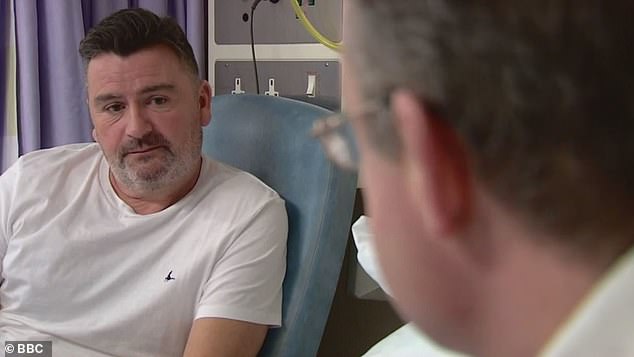 David McCallion, 50 (pictured), became one of the first patients to have the procedure done after it began to be used at NHS Fife in Scotland this month

One of the first patients to have the speedy surgery was David McCallion, a 50-year-old self-employed roofer with arthritis in his hip, the BBC reported.

His hip became too painful to ignore and was limiting his ability to work, so he opted for the new operation.

The father-of-two went into hospital at 7am, had his operation at 9am and was discharged by around 6.30pm the same day. 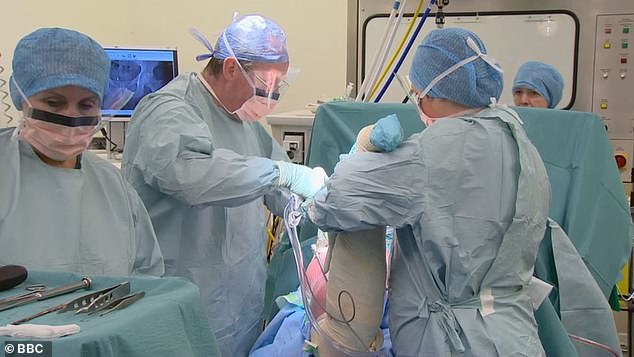 NHS Fife, in the Edinburgh region of Scotland, has become the first in the UK to offer the surgery using a smaller area of anaesthetic so the patients can go home the same day

Mr McCallion will have to take up to three months off work for his hip to fully recover.

Offering the operations at NHS Fife is part of a pilot, with plans to roll out the surgeries across Scotland and to try one-day partial knee replacements as well.

The procedure is not suitable for all patients but could be beneficial for those who are reasonably fit and a healthy weight.

It does not take as long to recover from because, instead of a spinal anaesthetic which numbs the leg muscles and stops them working for up to six hours, medics just numb the tendons and ligaments around the hip.

This prevents pain in the area but does not knock out the leg muscles, meaning the patient can get back to walking straight away.

The director of surgery at NHS Fife, Edward Dunstan, performs around four hip replacements a day and said the operation also reduces the risk of dangerous blood clots.

‘It makes a huge difference for the patient,’ he said. 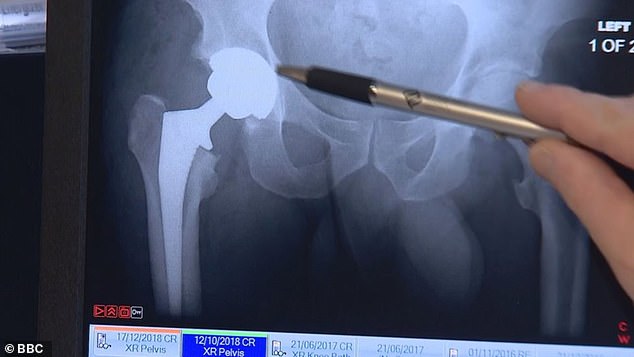 Mr McCallion suffered from arthritis in his right hip and, after avoiding having the operation, he was one of the first patients to have the one-day procedure done, which saw him in and out of the hospital in less than 12 hours 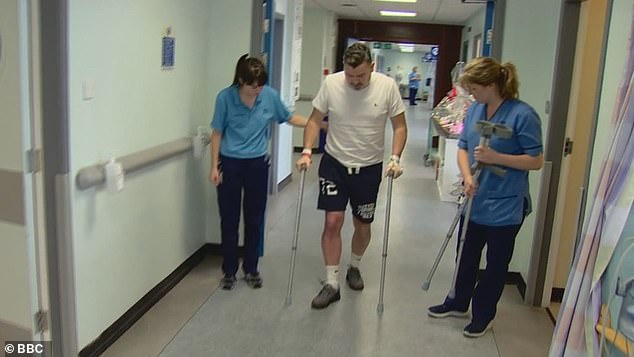 Roofer Mr McCallion, a father of two, went into the hospital at 7am, had his operation at 9am and was discharged around 6.30pm the same day – he will have to take 10 to 12 weeks off work to fully recover

‘It reduces muscle loss in the body – if you stay in bed too long you lose muscle mass.

‘It increases the oxygen saturation in the blood which makes them feel very much better.

‘It also increases patient satisfaction rate and, importantly, it reduces the risk of clots which can be a dangerous complication of hip replacement surgery.’

There are more than 15,000 joint replacement operations carried out every year in Scotland and around 160,000 in England and Wales.

Each procedure costs on average £5,500, which increases with longer hospital stays, so shortening recovery will save the NHS money, too.

‘When you consider a one night stay in hospital is £500, if you can reduce that by just two days you are saving £1,000 of that patient episode,’ added Mr Dunstan.

But patients hoping to be sent to Fife for the convenient operation will be out of luck – in the vast majority of cases people can only be referred to their local hospital.

WHAT IS A HIP REPLACEMENT?

A hip replacement is a routine operation carried out around 175,000 times a year in England, Scotland and Wales.

People are usually referred for a hip replacement when their natural hip joint – where the thigh bone connects to the pelvis – has worn away or become damaged and is causing pain or disability.

Most commonly this happens as a result of arthritis, in which cartilage around the joint is weakened or damaged and the bones grind against each other.

Hip replacement surgery involves sawing off the head of the thigh bone – the femur – and the hip socket (the acetabulum) and replacing them with a metal or ceramic ball and socket connected to the skeleton.

Most procedures are carried out on people between the age of 60 and 80.

It can be done on younger patients but the artficial joints are only built to last for around 15 years, with multiple replacements becoming progressively more difficult and less successful.

The operation usually takes around 60 to 90 minutes and involves spending a few days in hospital.