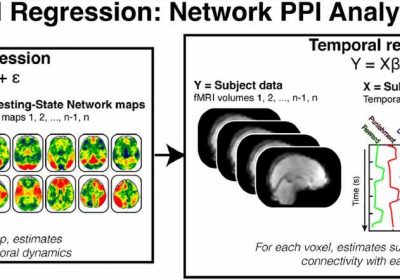 Researchers have reported findings that add to our knowledge of how human behavior may be shaped by the default mode network, a specific network of brain regions with both resting and task-related states. The article, “Reward enhances connectivity between the ventral striatum and the default mode network,” was published on June 18, 2022, in NeuroImage. The authors are Ekaterina Dobryakova, Ph.D., of Kessler Foundation and David V. Smith, Ph.D., of Temple University.

The default mode network (DMN), which comprises the posterior medial cortex, medial prefrontal cortex, and lateral temporal-parietal regions, has been shown to be engaged in several task-related behaviors. Studies show that DMN activity increases during inward-directed thought and decreases during externally directed tasks requiring focused attention. Despite evidence for a role for the DMN in shaping behavior, little is known about how task-related changes in the DMN influence connectivity with other brain regions. For example, while some observations indicate an indirect relationship between the DMN and the striatum, how the DMN and striatum interact during tasks remains unclear.

To further explore the functions of the DMN, Drs. Dobryakova and Smith applied a novel analysis to the reward task, using behavioral and neuroimaging data from 495 randomly selected individuals in the Human Connectome Project, an open access database of healthy participants. The goals of this network-based psycho-physiological interaction analysis were twofold, according to Dr. Dobryakova, a senior research scientist in the Foundation’s Center for Traumatic Brain Injury Research. “First, to test the effects of reward on connectivity between the DMN and the striatum; and second, whether such connectivity is associated with behavioral and personality characteristics relevant to reward processing,” she explained.

In line with other studies, during the task, they observed decreased activation of the DMN and relative increased activation of other networks. “Most notably, we found that the experience of reward enhanced connectivity between the DMN and the ventral striatum,” Dr. Dobryakova reported, “an effect specific to the DMN. We were also surprised that the strength of this connectivity correlated with personality characteristics relating to openness,” she added.