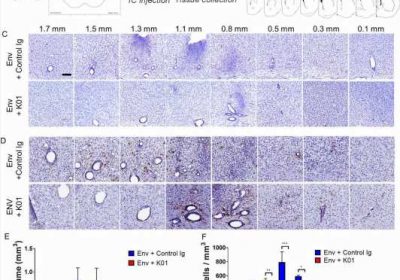 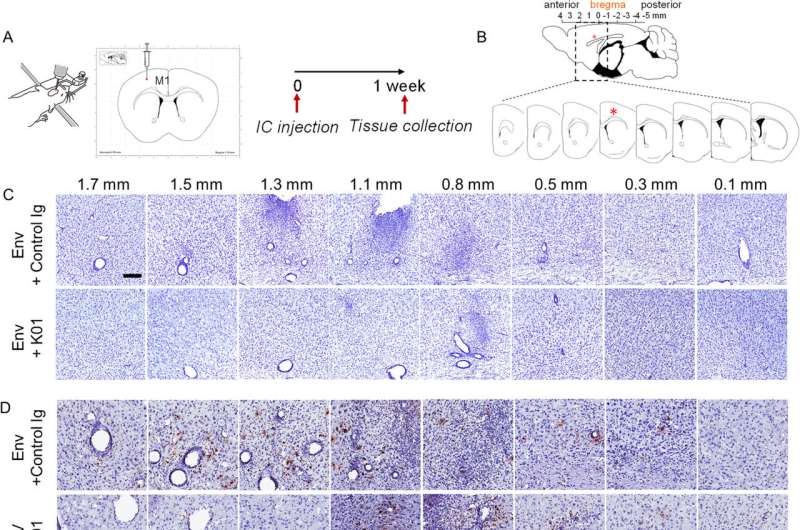 Researchers have published two papers describing how they identified a potential new pathway for treating a sporadic form of amyotrophic lateral sclerosis (ALS). The studies were published as part of a cooperative research agreement between the National Institute of Neurological Disorders and Stroke (NINDS), part of the National Institutes of Health, and the Switzerland-based biotechnology company GeNeuro Inc.

One unusual side effect of hundreds of thousands of years of evolution is that the human genome now contains DNA sequences from ancient retroviruses—referred to as human endogenous retroviruses (HERVs). Though most remain dormant, reactivation of HERVs have been implicated in several neurodegenerative diseases, including ALS.

The first of these papers shows that a specific HERV produces a protein that can be found in the cerebrospinal fluid (CSF) of people with ALS. This protein, called HERV-K ENV, is toxic when added to neurons grown in laboratory dishes. In addition, a special kind of mouse genetically designed to create HERV-K ENV develops symptoms very similar to ALS. Adding the CSF from people with ALS to lab-grown neurons resulted in damage to the cells. When a synthetic antibody designed specifically to recognize HERV-K ENV was added as well to those neurons, the toxic effects were reduced. These findings together suggest that the improper activation of the HERV-K ENV gene could be the cause of the symptoms seen in certain cases of sporadic ALS.

The discovery that a synthetic antibody to HERV-K ENV could be protective led the researchers to look at whether the immune system of people with ALS produced any antibodies, as well. In the second paper, the authors show that indeed higher levels of antibodies against HERV-K ENV were seen in the blood of a group of people with ALS as compared to healthy donors. The pattern of antibodies against this viral protein was also more complex in persons with ALS. In addition, there was also a correlation between higher antibody levels against HERV-K ENV and longer overall survival.

Together, these findings add evidence to the hypothesis that a reactivation of the HERV-K virus plays a role in the development of ALS, and that an antibody response against it is protective. These data also suggest the possibility that treatment with a synthetic antibody raised against HERV-K-ENV might have beneficial effects in those persons with ALS who also have evidence of HERV-K reactivation.