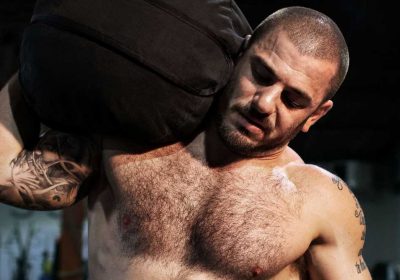 Every summer, top CrossFitters compete in “the Games,” a five-day, 14-event CrossFit challenge that’s like the decathlon, American Ninja Warrior, and World’s Strongest Man mashed into one ab-tastic sweatfest.

Last year, the final event was called Aeneas because … well, Aeneas was a war hero, and presumably ripped. It involved five pegboard climbs, requiring you to hold a dowel in each hand and jab your way up an eight-foot board; 40 thrusters, front squats to overhead presses with an 85-pound barbell; and three 33-foot loaded yoke carries, in which you shoulder a crossbar attached to a base. Weight is added for each subsequent carry, starting at 425 pounds and going to 665 pounds. The event separates the very fit from the impossibly fit.

It also separates the impossibly fit from Mathew Fraser. Fraser is the three-time defending CrossFit Games champion, and he’ll chase his fourth straight title when the Games begin in Wisconsin later this month. And the 5-7, 195-pound bowling ball of a man tears it up in all CrossFit events, from the Olympic lifts like the snatch to the gymnastics maneuvers like the muscle up, to all the work capacity events there are.

That’s exactly why Men’s Health asked Fraser to give us his best CrossFit wisdom for some of the sport’s trickiest lifts. His tips will help you destroy your next WOD.

What Is It? The most technically demanding move in CrossFit (and Olympic weightlifting), the snatch has you lifting a loaded barbell from the ground to overhead, all in one motion. The move can be also be done with kettlebells or dumbbells. Fraser’s career-best barbell snatch: 315 pounds.

What Fraser Says: “Keep your arms absolutely straight and locked out through the first part of the lift so all the power from your hips will translate upward.”

What Is It? The cardio row machine mimics what it’s like to row a boat, and it’s become a staple exercise in most CrossFit boxes. It’s typically done on Concept2 rowers. A typical CrossFit workout has you row a set distance or number of calories. In 2018, the CrossFit Games included a marathon row, which had athletes rowing a whopping 42,195 meters. (Need a comparison? Try rowing a mere 500 meters and see how your body feels. Fraser completed the marathon row in 2:48.36.

What Fraser Says: “Start coiled close to the rower, then extend your legs, then your hips, then follow through with your arms. It will feel unnatural.” (Need a rowing workout? Check these out.)

What Is It? This cardio crusher has your feet pedaling and your arms pulling against variable resistance, typically for a set number of calories. The harder you push, the harder the bike is to pedal, creating a unique movement that never feels easily. It’s best used in short bursts. Fraser’s one-minute Airbike record is 84 calories in 60 seconds.

What Fraser Says: “Embrace the pain and just go hard. Keep telling yourself the pain will leave in a little bit, because you’re never on there for long. There is no form.”

What Is It? An advanced movement, the muscle-up requires that you start hanging from a bar or rings then pull your entire torso above it, locking your arms out at the top. There are several variations of the muscle-up. CrossFit is known for having athletes do kipping, explosive muscle-ups. There’s also the strict muscle-up shown in the video below. Fraser can rip through 30 kipping muscle-ups in 2:00.16.

What Fraser Says: “Do not try ring muscle-ups until you are very good at pullups, strict pullups. Learn pullups first, then muscle-ups will come.”