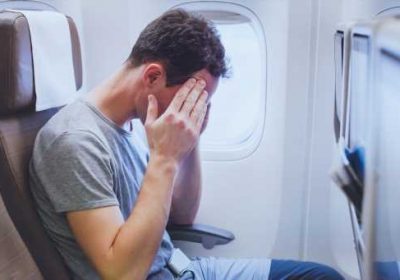 The harsh, inflexible gender roles reinforced by our patriarchal society hurt everyone, including men. Just ask this Redditor, who was shamed by his brother for grabbing his male friend’s hand while experiencing anxiety on an airplane.

User @Poabplane took to the infamous /AmITheAsshole Subreddit for some unbiased insight into this very bumpy ride. For context, he (24M) was going on vacation with his friend Leon and his older brother, Paul. @Poabplane has “pretty bad” flight anxiety, which everyone knew about ahead of time.

“It’s usually at its worst during turbulence, take offs, and landings, and I tend to [breathe] faster and my muscles tense up so badly,” he explained. “And sometimes [when] I get too scared, I freak out. So I always find touch to be my comfort.”

Although both men were aware of @Poabplane’s anxiety, they take completely different approaches to supporting him, he wrote: “Paul is an unemotional person and believes that we shouldn’t show emotions because we’re [men], so he’s been teasing me about it since I was a kid. Leon is the complete opposite of Paul, as he is caring and a very kind person.”

Teasing someone who’s experiencing anxiety is… not cool, to say the least. But hopefully Paul has matured over time and recognized the validity of his brother’s mental health struggles?

Alas, that does not appear to be the case. Their flight got off to a bad start when @Poabplane started to spiral and asked Leon to hold his hand after the trio boarded. “Paul saw it and shot me a dirty look and was obviously annoyed,” he recalled. “After 10 mins passed, I felt better, and we let each other’s hands go.” 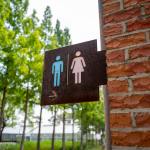 Things were okay for a bit, but later into the flight, the plane hit some turbulence.

“It was very unexpected,” @Poabplane explained, “and it scared me to the point [where] I almost cried. I woke Leon up and grabbed his hand, and he just calmly comforted me. I explained to him what happened, and Leon was okay with it. Paul, on the other hand, got so annoyed he pulled my hand out of Leon’s and told me to stop being a crybaby, and [that] I was embarrassing Paul and Leon.”

Naturally, @Poabplane tried to defend himself and his friend, but Paul wasn’t having it. In fact, his brother went so far as to call him “gay” — in a derogatory way, just like Hilary Duff warned us about in that unforgettable PSA from… *checks notes* 2008 — for holding hands with his male friend.

“[Paul] said he didn’t want us to be judged by people around us and assume negative things just ’cause we showed emotions,” the Redditor concluded. “So, AITA?”

It should go without saying, but just in case: Holding hands with another man doesn’t make someone gay, nor is being gay a “negative thing.” Homophobia aside, everyone has emotions, and it is totally normal to express them outwardly. Despite what toxic masculinity would have us believe, crying doesn’t make someone “less of a man.” It is a normal, human reaction in moments of intense stress, fear, or nervousness. This is especially true when a mental health disorder like anxiety is at play.

“NTA. Your brother’s been exposed to a lot of really harmful attitudes about gender and orientation in regards to showing emotion,” one commenter wrote. “I’d recommend that he read up on the ongoing mental health crisis facing men due to the unrealistic, toxic, and frankly stupid expectation of men not expressing emotion. … And well done on you and your buddy for being supportive humans who don’t filter every decent reaction through your pants!”

“Paul is dealing with toxic masculinity,” someone else opined. “He isn’t comfortable with himself and projecting it onto you. Keep doing what you’re doing and ask Paul to sit away from you if it bothers him.”

“Kinda seems like Paul got pretty emotional there too,” another commenter quipped. “NTA.”

The Redditor was also encouraged to seek help for his anxiety. According to the Anxiety & Depression Association of America, this common mental health issue affects an estimated 6.8 million adult Americans, yet only 43.2 percent of them are receiving treatment.

“Mild anxiety is totally normal, but it sounds like you have flown a lot and still have severe issues,” one commenter wrote. “Might help you to talk to someone about it!”

Before you go, check out these affordable mental health apps we love: