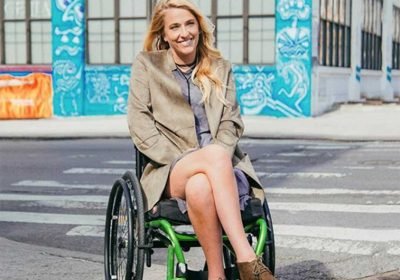 The clip featured Beck, a newly injured quadriplegic, being transferred from a car to her wheelchair. That was it.

“It’s not wrong to have a fetish, but it’s wrong to take someone’s trauma and make that your pleasure,” Beck, 29, tells PEOPLE of the video that was used without her consent.

It was one of her early experiences with “devotees,” which she describes as “people who fetishize disability and try to ask questions about your injury to pleasure themselves.”

Besides being “disgusting,” she says it also made her realize how much work there was to be done to humanize those within the disabled community.

“We should not be fetishized,” she says. “We are a community that deserves to be seen as your average, daily people with the same opportunities as able-bodied people.”

Beck became paralyzed in 2016 when she and her husband Jacob were driving home late at night in a rainstorm. “We hit a puddle, our car hydroplaned, flipped three times and hit a tree,” says Beck, who is based in Chattanooga, Tenn. “The roof of the car went into my head and compressed my spine, which first fractured at [vertebra] C6 and then punctured my spinal cord.” At 26, she was left paralyzed from the waist down with limited finger function and one working bicep.

After the accident, she was on so many drugs for the pain that she almost didn’t believe the doctors when they told her she was paralyzed. “I was in the ICU and I can remember thinking, ‘This has to be a nightmare, it’s not real.’ And I had just finished surgery so I kind of felt like I was dreaming — but I never woke up.”

The next few months were rough. “Coming home was one of my hardest moments post-injury because I expected to have everything be back to normal,” she says. “Jacob helped me get onto the couch and then he walked into the kitchen, and it was almost like a slap in the face. It was like, oh my gosh, I can’t go into the kitchen without someone putting me back into the wheelchair or someone carrying me there.”

But Beck refused to be limited by her injury. Before her accident she was a runner and an avid hiker, so she continued to find ways to immerse herself in the outdoors. She even went skydiving using a special adaptive strap to keep her legs together and lifted up to her chest.

“That quote, ‘Life is one percent what happens to you and 99 percent how you respond,’ became real to me,” she says. “I was going to make it through and find a way to still enjoy life, even in a wheelchair.”

One of her first projects was to start an Instagram account to share her experience and connect with other newly injured people. She started hearing from spinal cord injury survivors all over the world.

“There are so many people out there that are also doing this life and they are not seen, they are not known,” she says, explaining that many people with disabilities are stigmatized, dehumanized or victims of prejudice.

And she found herself incredibly inspired by the countless unique experiences. “All of these people are still doing the things they love to do no matter what,” says Beck. “Being in a wheelchair changed their lives but they are not allowing it to stop them from doing the things that they love.”

She knew what she had to do.

“I started gathering all of these stories on my page,” she says. “I just wanted to tell them all.”

That work has continued since her involvement with See Us, a new campaign by the Christopher and Dana Reeve Foundation. The movement aims to challenge the stigmas and prejudice faced by the 5.4 million Americans living with paralysis by collecting their stories.

Using the hashtag #ReeveSeeUs, people with spinal cord injuries have shared more than 600 posts about their lives. Beck says it’s the culmination of experiences that makes it so impactful.

“Spinal cord injury is not the voice of one person on its own. It’s a voice of a large group of people who need to be heard together. Every injury is different, everyone has different functions and different personalities. It’s not one story.”

And raising those voices together increases awareness, she says, which can fund the research that might one day find a cure.

“The more stories we get for the See Us campaign, the more power the movement will have,” Beck says. “I think that is what is so important to me about this.”

To read stories from the paralysis community or share your own, go to ReeveSeeUs.