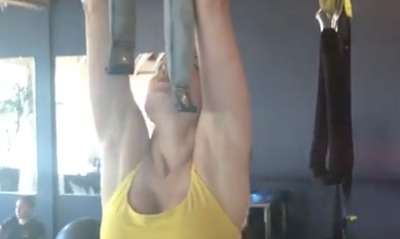 Filming hasn’t started on Captain Marvel 2 yet, but Brie Larson isn’t slacking off. She just posted a video to Instagram in which she can be seen working on her pullup game and challenging her grip strength — and the people in the comments are impressed, to say the least.

“Brie’s form isn’t bad, and this is a hard move. Solidly done, but plenty of room for improvement too,” says Men’s Health fitness director Ebenezer Samuel C.S.C.S. “You can see there’s a little hip/waist action happening as she’s trying to use lower-body momentum to help elevate her torso. Work to be in control of that lower body action as much as possible; in the long term, it’ll help safeguard your shoulders.”

While her form might require some slight finessing, Larson is still plenty strong enough to wield Thor’s hammer. She shared a photo holding Mjolnir earlier this week with the caption “Not to be whatever, but….told you I could lift it”, precipitating an influx of comments from people who couldn’t wait to “well, actually” her about it for reasons that were totally 100 percent about comic book accuracy and nothing else at all.

Not to be whatever, but….told you I could lift it ?

Not to be whatever, but….told you I could lift it 😇

Larson has shared her workouts on social media before: back in 2017, while training to play superheroine Carol Danvers in Captain Marvel, she posted her pullup routine.

9 months of training really does some stuff to your body ??? #mondaymotivation