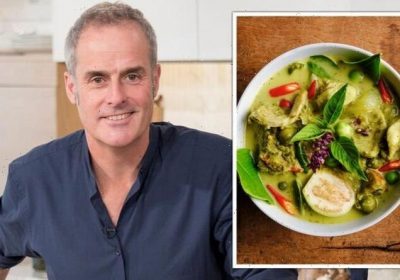 This Morning: Phil Vickery accidentally refers to his 'wife'

Everyday, over 1000 people are diagnosed with cancer. It turns out, 97 percent of Britons already have cancer-preventing foods burrowed deep inside their cupboards, a survey by the World Cancer Research Fund (WCRF) found.

These foods include tuna, wholegrains, canned or dried pulses, such as lentils, canned or frozen vegetables and more.

After his father’s diagnosis of skin cancer, ITV’s This Morning chef Phil Vickery, decided to join the WCRF in spreading awareness about these “cupboard heroes”.

He said: “It’s not about the latest superfoods, and every PR company can write about superfoods, whether it’s blueberries from Guatemala or fresh asparagus from the Andes.

“It doesn’t interest me.

“Eating fuss-free staple foods has so many benefits, particularly in the current context.”

Talking about the dish, he said: “I do a green vegetable massaman curry using tinned potatoes, 29 pence. I wanted to make that. I wanted to really hate it. But it absolutely works.

“And forget the snobbery side of things it’s about, does it taste good? I don’t care how you get there.

“I get far more excitement and enjoyment from cooking that tinned potato curry, which is less than a pound, than cooking lobster.”

Molecular epidemiologist Dr Giota Mitrou from the University of Cambridge, explained the properties of everyday foods, including tinned vegetables, which are associated with cancer prevention.

“Canned or frozen vegetables – such as sweetcorn, mixed vegetables and spinach – are often cheaper than fresh and can be just as nutritious.

“There’s evidence that vegetables and fruit can help protect against cancers of the mouth, throat and digestive tract.

“Canned or dried pulses, such as lentils, chickpeas and beans, are also nutrient-packed. They are high in fibre and provide a really good source of plant-based protein.

“We found strong evidence that foods containing dietary fibre and whole grains help to protect against bowel cancer and that dietary fibre protects against weight gain, overweight and obesity.”

The ITV chef’s father was diagnosed with cancer around three months ago.

Although he was given the all-clear after the surgeons “cut off a lump” from the side of his head, the ordeal motivated Vickery to embark on the food awareness campaign.

“My father was always a big, strong bloke. You know, ‘come on son, get your shirt off let’s go and work in the garden’, and he was always that gung ho.

“It hit him like a sledgehammer, he was a typical bloke. There’s another really important thing about this cancer research fund and also the awareness week, he had it for about a year, and didn’t do anything about it.

“So cancer is one of those things, which certainly for me is what other people get.. it doesn’t happen to you.

“But when it does happen to your close family, your friends, it makes you very aware of it,” he said.

Vickery’s recipes are available inside his new book The Canny Cook: Freezer & storecupboard meals on a budget, available on Amazon.

The World Cancer Research Fund has developed a “cupboard hero” recipe generator that you can use to plan cancer-preventing meals using foods you already have.