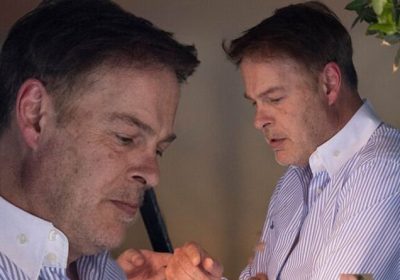 Having run for 19 seasons, BBC Two’s Dragons’ Den still remains hugely popular and Jones is the last remaining original investor. With thousands of budding entrepreneurs trying to win Jones’ investment, some would be surprised to know that it was through his “addiction to business” that led to the reality star suffering from pneumonia, a life-threatening infection that affects the lungs.

In a Q+A style interview with the Daily Mail, Jones described the infection as the “worst illness” he has ever had, so much so that at the time he feared for his life.

“Three years ago I had pneumonia,” he said at the time.

“I had been working too hard and got a bit run-down.

“I got very, very wheezy and had trouble breathing — so much so that I thought I was going to die.

“I was put on a course of antibiotics.”

Despite coming down with infections such as pneumonia, the self-proclaimed “workaholic” has not been put off his day job, and even admitted to Googling whether being “addicted to business” was a real illness.

Pneumonia is an infection of one or both of the lungs caused by bacteria, viruses or fungi. The most common cause by a bacteria known as Streptococcus pneumoniae is often caused when the body is weakened in some way such as by illness, poor nutrition, old age or impaired immunity.

Around 220,000 people receive a diagnosis of pneumonia each year, with some individuals receiving more than one diagnosis within a year.

According to the NHS, symptoms of pneumonia can either develop suddenly over 24 to 48 hours, or they may come on more slowly over several days.

Although symptoms may differ according to what has caused the infection, some commonly experienced include:

Other, less common symptoms of the condition to look out for include:

Although pneumonia can affect anyone, infants younger than two years old, and adults over the age of 65 are usually more at risk. It is important to note that newborns and infants may not show any sign of the infection.

Due to similar symptoms being signs of other health conditions such as COVID-19, the NHS recommends that individuals call 111 if you experience a high temperature, a new, continuous cough or a loss or change to your sense of smell.

If you experience any of the following, then call 999 and wait for an ambulance:

When in hospital a doctor will be able to diagnose pneumonia by asking you about your exact symptoms and examining your chest.

For those diagnosed with pneumonia, treatment aims to not only cure the infection but prevent any possible complications.

The NHS explains that mild pneumonia can usually be treated at home by:

Some individuals who are more at risk of the condition may have to be treated in hospital, where a ventilator can be used to assist with breathing if needed.

The NHS provides some ways in which individuals can try to prevent catching pneumonia, most of which concern good hygiene practices such as covering your mouth and nose when you sneeze or cough. A healthy lifestyle can also help prevent pneumonia. For example, quitting smoking can help to avoid damage to your lungs and reduce the chance of infection.