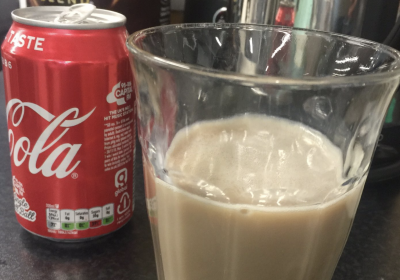 If you’re in the market for unique food and drink ideas, look no further than your Twitter feed. Case in point, one of the latest oddities to sweep Twitter—milk Coke. Yes, that’s a combination of milk and Coke. No, I have not tried it (mostly out of fear).

James Felton, a comedy writer, recently took to Twitter to proclaim that milk Coke is indeed “a real thing.” James wrote, “Brummies love it. We can all move on from this discussion now, I will be taking no further questions.” The tweet includes three photos showing the drink and him sipping it.

Milk coke is a real thing. Brummies love it. We can all move on from this discussion now, I will be taking no further questions. pic.twitter.com/dQR8bg3UAO

Milk coke, as strange topics tend to do, really ~shook~ Twitter users. Many were appalled. Some people have pointed out that milk coke isn’t a far cry from a Coke float, made with vanilla ice cream. Others were curious enough to try it themselves.

Thou shalt not mix coke and milk

Everyone thinks Coke Milk would be disgusting… Ever had a Coke Float? DELISH pic.twitter.com/9JArpAKdGE

In TK Maxx earlier I saw what I can only assume/hope was the abandoned remains of a milk coke @JimMFelton pic.twitter.com/XHX5M32rXY

So…what do we think?! Many Twitter users who actually tried the drink were pleasantly surprised with the taste. If you like a soda float, it may be worth a try.