One nurse’s haunting account of working in intensive care 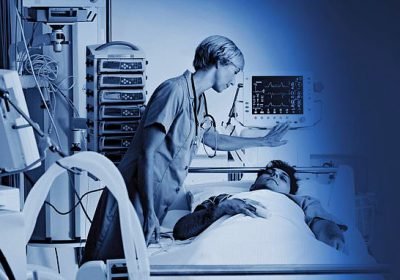 ‘Why my job in intensive care has convinced me NEVER to have a routine operation’: One nurse’s haunting account of the daily traumas of caring for patients in the ward where life hangs by a thread

When I get home from work, my husband asks: ‘How was your day?’ Mostly, I smile and simply say: ‘It was good,’ as if I’d been analysing spreadsheets all day.

He doesn’t need to know about the 17-year-old’s brain haemorrhage, or the three dead bodies I had to undress, wash and zip up in a body bag. And I decide not to mention the teacher, just 33, the same age as my husband, whose life-support machine I switched off.

I’d rather not go on about it. No one likes to be reminded of their own mortality.

After ten years as an intensive care unit (ICU) nurse, looking after the hospital’s sickest patients, I’ve almost become desensitised to it. 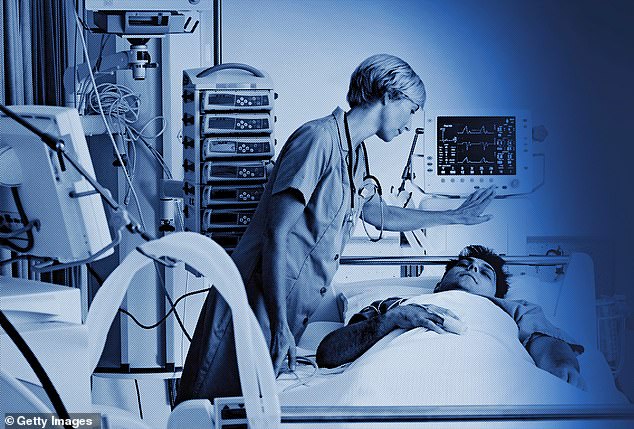 Just a tiny minority of those admitted to hospital – one per cent of adults under 75 – are ever admitted to my ward. And only half leave alive.

Most people only face death a couple of times in their life, but for me it happens several times a day, every day.

My prime concern is the well-being of my patients, and helping keep them alive. But it’s important I don’t become too attached, so in many ways it’s just another day at the office.

The first death I witnessed as a newly qualified nurse was of course nerve-racking. I remember my hand shaking as I attempted chest compressions; thinking that my actions in the next two minutes could save this man’s life.

Sadly, they didn’t and I talked about it incessantly afterwards, desperately trying to make sense of what I’d seen, heard, felt. But nowadays it doesn’t faze me. I can separate myself from the dying child, the brain damaged parent and the lifeless body in front of me. They are not my children, my partner or my parent, but just a part of my highly technical job. For the sake of my sanity, I have to think this way. 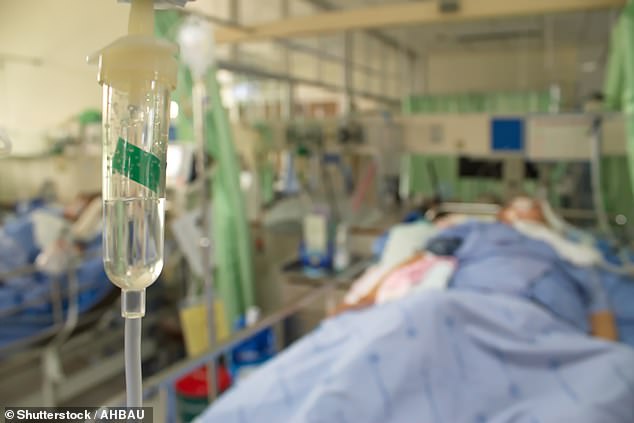 The deaths I still find hard are the ones that could have been avoided – those where, if only a scan picked up a warning sign earlier or a different treatment was chosen, a life could have been saved.

One young guy in his 20s came in last week after suffering a rare type of stroke. He was a keen runner, perfectly healthy with no family history of illness. We had two options for treatment: either we gave him blood-thinning medication to prevent a major blood clot in his brain, or we waited before acting: rarely, blood thinning medication causes excessive bleeding.

Following the neurologist’s advice, I administered the medication. Within an hour, the patient suffered a catastrophic bleed in his brain. It has left him unable to speak, eat normally or walk for the rest of his life. We made the wrong choice.

Then there are the tragic cases – the terrible road traffic accidents or freak falls from five-storey buildings – which are sad, but an unfortunate reality of life. Oddly, these are easier to swallow. If someone doesn’t make it at least we know we did everything we possibly could to save them. 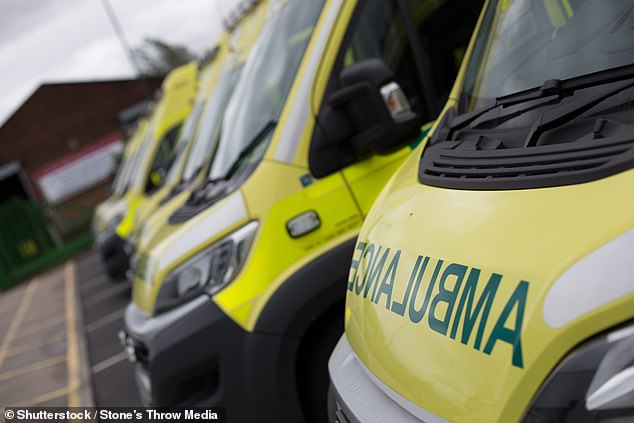 Ambulances can bring people to the intensive care unit. Patients might include victims of serious car accidents, falls or fires, people with severe head injuries

Last week a man was wheeled into my ward: ‘Office worker run over by a bus,’ the hospital porter announced, handing me his charts. ‘Severe internal damage and head injuries.’ His heart had already stopped once and emergency surgery to stem the internal bleeding was only partially successful.

He’d been placed in a medically induced coma and a foot-long gash in his stomach was wide open – red, mangled intestines on display for everyone to see.

It’s standard procedure to leave patients ‘unstitched’ after an operation to reduce the risk of infection.

I thought of his wife and two children. They were at home, expecting him to come back from work at the time of the accident. They didn’t know that morning’s goodbye kisses would be their last.

An Intensive care unit (ICU) is a specialist hospital ward that provides treatment and monitoring for critically ill patients.

Most ICU patients have malfunctioning organs and need specialist equipment to help them to breathe, eat, drink and empty bowels and bladder.

Patients might include victims of serious car accidents, falls or fires, people with severe head injuries, stroke and heart attack patients and those recovering from major surgery.

Often, an ICU admission is only needed for a couple of days and patients are transferred to a less intensive ward to continue their recovery. Others remain in ICU for months, while some deteriorate and eventually die there.

Each ICU nurse is assigned one or two patients. The nurse provides 24-hour care and is expertly trained in painkilling and sedative medication and operating the array of complex machines that keep patients alive.

NHS nurses must complete specific theoretical and practical training before being able to qualify as a specialist ICU nurse.

It’s particularly tough when you’re the breaker of bad news. The doctor usually delivers the blow, then disappears after five minutes leaving you with a distraught family. I still haven’t figured out the right thing to say. That day, I placed my hand on the shoulder of the bus accident victim’s mother as the doctor explained her son may die. I reassured her that he wasn’t in pain or suffering. I always say it, even if I don’t know it to be true.

Her wailing, as she held his body, spread through the ward like white noise. Only 24 hours earlier she’d cooked him dinner.

She stayed by his bedside, holding his hand, for 48 hours until the moment he died in his sleep.

Mostly ICU is deathly silent. The soundtrack is a series of intermittent bleeps, mobile phone ringtones and heavy, drawn-out breaths.

There are no frantic conversations or skidding trollies like you see in A&E. Most patients are sedated and can’t communicate, relying on a machine to breathe for them.

If there’s one thing my job has affected, it’s my sensitivity to risk.

I know there are millions of people who safely walk to the supermarket everyday and thousands of teenagers who enjoy a boozy night out, but I see too many of the tragic anomalies to view the mundane as harmless: drunken teens who’ve plunged to their death from a hotel balcony, the child who crossed the road at the wrong moment.

I would certainly never choose to have an operation unless I desperately needed it. One 25-year- old rugby player, as muscular as they come, came in on life-support machines after having a routine, hour-long operation to fix a torn rotator cuff in his shoulder.

For some reason, his body had an adverse reaction to anaesthetic which caused a huge blood clot in his brain. Two days later, he suffered a massive stroke as a result of his injuries and died.

Unnecessary operations are just not worth the risk.

Not everyone who ends up in ICU is a victim of a freak accident. For some it’s a heart attack, for others it’s a stabbing or a suicide attempt.

As I mentioned we are trained not to get too emotionally attached to patients. But sometimes it’s hard not to. Two days ago, a 15-year-old girl was admitted to my ward, weighing just four stone. She had the bones and organ function of an 80 year old – the result of her severe anorexia – and told me about the bullies who drove her to stop eating. Simple conversations like this with patients are another hugely important part of my job.

In her case it was the first step in helping her to gain enough weight to stabilise her kidneys and move her to a high-dependency ward, one step down from ICU.

Mental health patients often land in our care before they move on to a specialist psychiatric unit.

Suicide attempts are a tricky one. About half of suicidal patients are grateful to have been saved. But the other half, not so much.

I looked after a woman last year who’d tried to kill herself with an overdose. She was furious she’d been revived. ‘Why didn’t you let me die?’ she kept asking. It was the same week we had refused admittance to a father-of-three who suffered a severe stroke due to a lack of beds. I can’t help but feel he was more deserving of lifesaving treatment than the suicidal woman. 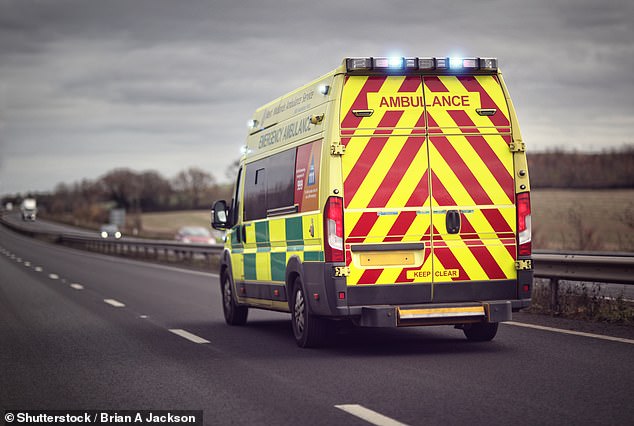 Not everyone who ends up in ICU is a victim of a freak accident. For some it’s a heart attack, for others it’s a stabbing or a suicide attempt (pictured is an ambulance)

Turning sick people away from hospital is becoming an everyday occurrence. A report last year by the Faculty of Intensive Care Medicine found that 80 per cent of ICUs were sending patients to other hospitals as they had no beds. Then there’s the lack of staff, which according to a recent report, means that six in ten ICUs are failing.

I’m never surprised when a colleague quits or takes months off at a time. ICU is one of the toughest jobs in nursing, not least because we are each responsible for up to 20 patients. It’s our job to advise the senior consultants of the minor details that are crucial for saving a patient’s life.

We also need to react quickly, often to unexpected circumstances. The 2017 London Bridge terror attack was just one example.

Friends on ICU wards at Guys Hospital – the closest to the attack – were overwhelmed by the mass of bloody, shivering bodies literally arriving on the doorstep. They were looking for A&E but were too confused and terrified to find the right entrance.

Most were victims of multiple stab wounds and had rib fractures. As they piled in, the nurses on shift hadn’t a clue what had happened.

All the nearby hospitals, including mine, were warned of a bomb threat and told to prepare ourselves for a hectic, busy night. None of us even thought about our own personal safety that night. Our only concern was our patients.

By the time my 12-hour shift ends, I am completely exhausted. I’ve usually had one half-hour break and my eyes feel like sandpaper.

Last night, I saw two people die – but two of my patients came off the ventilation system helping them to breathe. To us, it’s a small win, but to them, it means speaking, eating and fresh air in their lungs. It makes their life worth living.

When the night ends, it’s a relief to sit on the sofa and talk about the broken boiler. It’s a nice reminder that what happened that day isn’t my life, it’s my job.

I don’t feel sad, worried or torn-up about my patients but I do feel overwhelmingly grateful that my biggest problem is my useless heating system or the dripping kitchen tap.

Sometimes, after a particularly tough day, I creep out of bed and into my two-year-old son’s room. I hug him extra tightly, feeling lucky that I have the chance to do so.