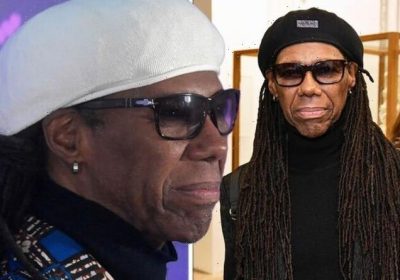 This Morning: Nile Rodgers reveals he broke a rib on tour

Teaming up with bassist Bernard Edwards back in the early 1970s, together Edwards and Rodgers formed Chic, who went on to release some of the best-known disco songs including Everybody Dance and Good Times. Still active in the music industry at the age of 69, most recently Rodgers offered 600 free tickets to furloughed US Federal workers during the COVID-19 pandemic to the Nile Rodgers & Chic concert in Washington, DC. He also took part in Eric Clapton’s tribute concert to Ginger Baker back in February 2020. Speaking back in 2019, Rodgers revealed that the one thing that came to disrupt his “happy-music universe” was his diagnosis with an aggressive form of prostate cancer.

Revealing unheard details of his first cancer diagnosis back in 2011, Rodgers told the BBC’s Hardtalk that he initially got the fateful call from the doctor right before he was heading out to perform a show.

He said: “Four years ago I was stricken with very aggressive cancer, and I remember when I got that phone call from the doctor – and of course I was terrified – but my immediate reaction after I got over that initial shock, I said ‘Doc, can we resume this call on Tuesday when I get back from Rome?’.

“I came back [four days later] and said: ‘Now, what were you saying?’”

Prostate Cancer UK explains that one in eight men will get prostate cancer during their lifetime. It is a type of cancer that usually affects the over 50s and typically develops slowly in the walnut-sized gland.

Explaining more about his diagnosis, Rodgers revealed that he knew something “hadn’t felt quite right” for a few months before doctors noticed his high PSA levels.

He continued to say: “I’d been having check-ups twice yearly to keep an eye on my health. And at the beginning of 2010, my doctors knew something was wrong but weren’t sure what.

“My PSA levels were starting to rise [a PSA test measures the amount of ­prostate specific antigen in the blood – a raised level can mean there is a problem with the prostate].

“When it doubled in a short period of time, the doctors did a series of biopsies.

“The procedure is horrible – very unpleasant. They use a sophisticated fishing hook that pulls away flesh from the prostate organ.

“But the twist was that when they finally diagnosed me with cancer, they said it was so ­aggressive, they couldn’t understand why I hadn’t had any real symptoms.”

Although prostate cancer can exist with no symptoms for many years, when the prostate is large enough to affect the tube that carries urine from the bladder out of the penis (urethra), some individuals may experience the following:

“When I returned, he [the doctor] told me that the cancer was growing fast,” Rodgers elaborated.

“He instructed me to go away, read as much as I could about the condition and see what my treatment options were.

“This was a life or death decision and I had to choose which path was right for me. I started writing a blog, Walking on Planet C, to reach out to others and try to come to terms with what was happening to me.

“I was very worried for myself. I didn’t want to die. Facing cancer makes you realise how precious life is.”

After thorough research, Rodgers came to the decision to have a surgical procedure known as a radical prostatectomy – an operation where the prostate and the cancer contained inside is removed.

The NHS explains that treatment for prostate cancer depends on the individual’s condition. In some cases if the cancer is in its early stage doctors may suggest “watchful waiting” or “active surveillance”. In other circumstances surgery is used alongside radiotherapy to kill cancer cells.

If the cancer spreads to other parts of the body and cannot be cured, treatment is focused on prolonging life and relieving symptoms.

Crediting the “excellent health information” that he was given at the time to help make the right choice for him, Rodgers took part in a Prostate Cancer UK Campaign, to help spread the message that men are not alone during their cancer journeys.

Alongside a promotional video back in 2019, Rodgers tweeted saying: “When I was diagnosed with prostate cancer my happy music universe imploded in an instant. Luckily organisations like @ProstateUK are there to support men and their families facing the disease.”

After the “shock” of his diagnosis, Rodgers also started to make changes to his lifestyle, to distract him from the possibility of the surgery failing. He added: “Getting cancer was a shock. I started walking five miles a day and got stronger, then decided I’d work at an insane pace to keep the focus away from the prospect of the surgery not being successful.”