NHS issues plea over flu vaccine ahead of winter 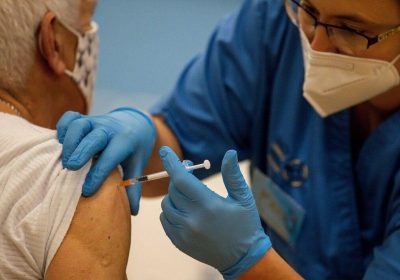 After two years when pandemic restrictions kept cases very low, infections could rebound dramatically due to low immunity. The number of patients in hospital with flu is already more than double the last season’s peak, NHS figures show.

An average of 344 were on wards in England last week, ten times the figure at the same time a year earlier.

There were 29 in intensive care, compared with just three in the same week last November. Admissions to critical care are now higher for flu than for Covid.

Writing in the Daily Express today, Steve Barclay says this winter is set to be “one of the most difficult yet” for the embattled NHS.

The Health Secretary adds: “For some people, flu is unpleasant. But for others, it can be dangerous and even life-threatening, especially if you have a health condition that puts you at greater risk.

“Earlier this month, I joined the over 17 million people that have come forward for their flu jab, at the same time as I got my booster for Covid-19.

“It was quick and easy, and I’d urge all Express readers to come forward and join me if you haven’t already.”

In a sign of escalating concern, the UK Health Security Agency (UKHSA)

recommended antiviral medicines should be made available in the community.

The drugs, which reduce the risk of serious illness, can now be prescribed by GPs to vulnerable patients who have symptoms of flu or live with someone who has it.

“We are currently seeing higher rates of flu at this time of year than usual. It is important those eligible have their flu jab as soon as they can.

“As flu cases have risen and in order to protect the most vulnerable – in line with pre-Covid flu seasons – antiviral medicines can now be prescribed in primary care settings such as GPs and pharmacies to those eligible who are most at risk to the complications of flu.”

Dr Mary Ramsay, director for immunisation and programmes at the UKHSA, said A&E attendances for flu had also increased.

She added: “Alongside older adults, flu rates are rapidly rising in younger children. Vaccination remains critical and I urge everyone eligible to take up the offer.”

The rise in flu admissions comes as hospitals in England are already at 95 percent occupancy.

The health service is in the midst of a bed-blocking crisis, with 13,000 taken up by patients who are medically fit for discharge.

Staff shortages and a lack of resources in social and community care are causing delays, creating bottlenecks for those needing to be admitted in A&E.

Three in ten patients arriving by ambulance – or a total of 22,883 – waited at least 30 minutes to be handed over to hospital teams last week, higher than at any point last winter.

Martin Flaherty, managing director of the Association of Ambulance Chief Executives, said: “The life-saving safety net that NHS ambulance services provide is being severely compromised by these unnecessary delays, and patients are dying and coming to harm as a result on a daily basis.”

Professor Sir Stephen Powis, NHS national medical director, said the data “shows the considerable pressure faced by staff before we enter what is likely to be the NHS’s most challenging winter ever”.

He added: “The figures also show that flu is unfortunately already with us and so the concerns that we had about the threat of a ‘tripledemic’ are very real.

“It has never been more important to get protected against the viruses ahead of winter so please book in for your jab if you are eligible if not already done so.”

He added: “Hospitals continue to contend with more patients coming in than going out with thousands of patients every day in hospital that are medically fit for discharge.

“We continue to work with colleagues in social care to do everything possible to ensure people can leave the hospital when they are ready.”

There were 4,600 Covid-positive patients in hospital as of Wednesday, down from 9,755 a month earlier.

The UKHSA said cases continued to decline. However, experts have warned another wave could still arrive in the coming months.

“Emergency and ambulance services are already grappling under the enormous strain caused by the surge in cases of flu and other respiratory conditions, which are significantly higher than this time last year, and are only expected to get worse if we see another wave of Covid-19.

“Delayed discharges mean medically fit patients are not able to leave hospital fast enough due to a lack of investment in social care and community services.

“That impacts bed availability and admissions, and means ambulances are waiting to hand over patients to hospitals – delaying them from getting to other patients who need their help.”

Strikes by healthcare staff are set to add to pressure next month as nurses walk out over pay.

The Royal College of Nursing will today announce the first dates for industrial action in England, Wales and Northern Ireland – Thursday 15 and Tuesday 20 December.

The union’s general secretary and chief executive Pat Cullen said: “My offer of formal negotiations was declined and instead ministers have chosen strike action.

“They have the power and the means to stop this by opening serious talks that address our dispute.

“Nursing staff have had enough of being taken for granted, enough of low pay and unsafe staffing levels, enough of not being able to give our patients the care they deserve.”

Mr Barclay said he “deeply regretted” the decision of some nurses to strike.

He added: “These are challenging times for everyone and the economic circumstances mean the RCN’s demands, which on current figures are a 19.2 percent pay rise, costing £10 billion a year, are not affordable.”

”I literally thought I was dying”

A midwife is leading the rallying call for eligible Britons to get flu jabs after falling chronically ill from it in intensive care, just days before she was due her vaccine, writes Chris Riches.

Fit and healthy medic Martyne Drinkall, 44, usually spends her days delivering babies and advising new mums at Leighton Hospital, in Crewe, Cheshire, and always makes sure she gets her flu inoculation.

But just days before she was about to have her winter flu jab she fell ill with influenza and deteriorated so quickly she was rushed to A&E and ended up in her own hospital’s ICU Intensive Care Unit.

She said at one stage she felt she was “dying” but slowly has improved and warns if this can happen to her, the flu could be devastating for older, vulnerable people.

Martyne said: “I was admitted to the Intensive Care Unit for a couple of days as I was very poorly. I literally thought I was dying; in fact, I was shouting ‘I am dying’.

“The care I received was absolutely amazing. I was so scared, but I eventually turned the corner and I am getting stronger each day. I have never had flu before and if I am honest, I never thought it would happen to me.”

Martyne ensures she is jabbed for flu every year and was due to have her annual jab at the time she fell ill. The viruses that cause flu can mutate and change every year, so an annual jab is needed to ensure you are protected.

She explained: “Thank goodness I am a strong, healthy woman otherwise this would have been a very different story as flu definitely tried to kill me.

“After the experience I have gone through, I would encourage everyone to have their vaccine as soon as possible so they are protected this winter.

“If I could save just one person and their family from going through what I did, I would be very happy.”

Martyne’s story comes as NHS Cheshire and Merseyside warn of a drop in the number of people coming forward for their vaccinations.

Professor Rowan Pritchard-Jones, Medical Director for NHS Cheshire and Merseyside, said: “We have seen a real reduction in demand for both the seasonal flu and COVID-19 booster jabs during the last few weeks.

“This could be due to people being unwell and therefore unable to attend or, more worryingly, it could be down to a lack of understanding or interest of how important the vaccines are.

“People with long-term health conditions are at a high risk of becoming seriously ill with flu – as are those are over 50 and pregnant women – so we need to encourage these people to come forward.”