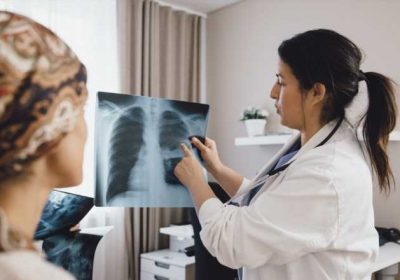 Baroness Delyth Morgan, the chief executive of Breast Cancer Now, has described the news as a “momentous and hugely anticipated milestone”.

Thousands of NHS breast cancer patients will benefit from the introduction of two new life-extending drugs after a U-turn by the National Institute for Health and Care Excellence (NICE).

Around 3,500 women will now receive the drugs – known as Alpelisib and Trodelvy – as part of their treatment, which experts hope will give patients a better quality of life. The decision to give the drugs the green light comes after the health watchdog rejected their introduction earlier this year.

Alpelisib – also known as Piqray – will be used in combination with the hormone therapy Fulvestrant to target a gene that leads to fast-growing tumours.

When used together, Alpelisib and Fulvestrant block the gene’s ability to help cancer cells survive and grow, therefore reducing the growth and spread of tumours. The drug will be available to those with the PIK3CA gene; it is estimated that around 2,800 patients are currently eligible for the treatment.

Trodelvy, on the other hand, will be used to treat locally advanced or metastatic triple-negative breast cancer that can’t be removed surgically.

It is estimated around 650 people are eligible to take the drug, which targets a protein on the surface of tumour cells that prevents them from multiplying and eventually causes them to die.

The new drugs will help around 3,500 patients.

While Trodelvy won’t get rid of the cancer, clinical trials have shown that it has the potential to increase the amount of time patients have before their disease gets worse by three months, and how long they have to live by five months.

Both drugs will be made available immediately on the NHS through the Cancer Drugs Fund – a source of funding for cancer drugs in England.

In a statement, Baroness Delyth Morgan, chief executive of Breast Cancer Now, described the introduction of Trodelvy as a “momentous and hugely anticipated milestone”.

“Following a devastating provisional rejection in April, this landmark decision will offer a new, effective treatment for these women, and crucially give them the hope of invaluable extra months to live and do what matters most to them and their loved ones,” she said.

Helen Knight, interim director of medicines evaluation at NICE, added: “Both Piqray and Trodelvy are effective additional options that hold out the hope of a longer and a better quality of life for people with these types of advanced breast cancer. And both represent another step in delaying chemotherapy, allowing people to stay well for longer.”