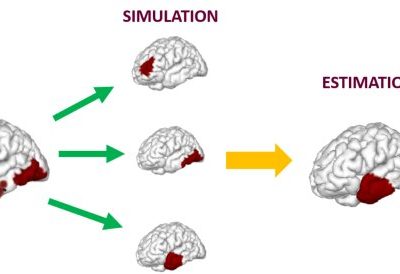 Understanding the source and network of signals as the brain functions is a central goal of brain research. Now, Carnegie Mellon engineers have created a system for high-density EEG imaging of the origin and path of normal and abnormal brain signals.

Bin He, head of the Carnegie Mellon University’s Department of Biomedical Engineering, and colleagues are working on a core initiative of the National Institutes of Health, called Brain Research through Advancing Innovative Neurotechnologies (BRAIN).

The group’s work with high-density EEG, reported in the journal Nature Communications,1 takes a major step toward realizing one of the central goals of the BRAIN initiative: “produce a revolutionary new dynamic picture of the brain that, for the first time, shows how individual cells and complex neural circuits interact in both time and space.” In other words, develop a way to watch how the brain does what it does.

“Electroencephalography (EEG), has been used for decades to track brain signals,” explained Shumin Wang, Ph.D., director of the NIBIB program in Bio-Electromagnetic Technologies. “Dr. He and his team developed a more powerful, high-density version of EEG that can track brain signals across much larger areas of the brain than previously possible. Artificial intelligence is then used to identify where these stronger signals originate and travel through the brain, with great accuracy.”

The research team tested the high-density EEG system in patients with epilepsy. Individuals experience seizures caused by errant pulses of brain activity, known as the epileptogenic zone. Many patients’ seizures can be controlled with medications. For those who are medication-resistant, surgically removing the epileptogenic zone is a clinical option. The ability of high-density EEG to accurately identify the epileptic source would allow for much-improved brain surgeries to efficiently remove only the problem area and spare surrounding brain tissue.

The team tested their method, termed FAST-IRES for spatio-temporal iteratively reweighted edge sparsity, on 36 epilepsy patients undergoing pre-operative testing. FAST-IRES non-invasive brain recordings were obtained over several days using a special high-density EEG array. The fact that FAST-IRES is non-invasive is extremely important, given that the standard pre-operative testing requires invasive EEG, which is necessary to pinpoint the epileptogenic region but comes with increased risks of infection, complications, and costs.

The FAST-IRES method was extremely accurate in identifying the position and extent of the epileptogenic zone in the patients, which was confirmed with the surgical data. “Our results clearly demonstrated that FAST-IRES could identify the epileptogenic zone with high precision, using non-invasive high-density EEG scalp recordings,” said He. Collaborators on the study at the Mayo clinic are considering implementing the system in the future.