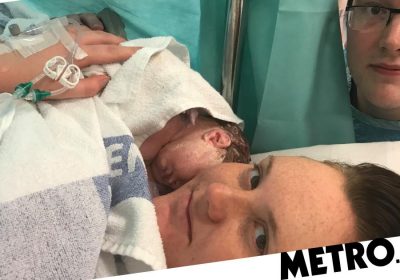 When Emma Lambert, 26, from Chorley, Lancashire, was due her second baby in October 2017, it was agreed that she would be induced at 38 weeks due to having repeated episodes of reduced movements.

Though her pregnancy was healthy, she often struggled to feel her baby kick due to having an anterior placenta. She was ‘anxious every day’ as there was never any pattern to her baby’s kicks and was monitored twice a week up until her induction date.

Due to the very stressful and anxious pregnancy, Emma was relieved that ‘the end was finally in sight’. She’d also had a successful induction with her first daughter four years before, and so she expected it would be a similar – if not easier – experience the second time around.

With both of her pregnancies, she had never written a proper birth plan, as she didn’t want to be disappointed if she didn’t get her ideal birth.

She knew birth was unpredictable – but nothing could have prepared her for the horrors of what happened when she finally delivered her beautiful baby girl.

Emma, who writes the blog Sophie Ella and Me, tells Metro.co.uk: ‘I was induced using the hormone gel and after multiple attempts over several hours, still nothing was happening.

‘I eventually had my waters broken and was placed on the hormone drip for eight hours, but I still wasn’t progressing.

‘I felt very disheartened that it wasn’t progressing the way it should have done. I was experiencing strong contractions, so I was physically in quite a bit of pain and discomfort – although the gas and air was helping.

‘I was anxious and scared as to what was going to happen, as my first birth was pretty straightforward.

‘Several hours later, it was eventually decided I needed an emergency c-section due to ‘failure to progress’, as I was two days into induction by this point. I can’t explain how terrified I was about needing a c-section, it felt like my worst nightmare coming true.

‘I was taken to theatre and the doctors, midwives and anaesthetists were great at reassuring me and I felt like I was in safe hands. Before we knew it, our second daughter, Amelia, arrived safely at 6.14pm. It was such a huge relief!’

After being stitched back up and spending some time in recovery, Emma was taken back to her room in the delivery suite. Her partner, Toby, 26, dressed Amelia, born weighing 6lb 11.5oz, and started her first formula feed, and the happy parents texted their family and friends to let them know about the safe arrival of their second daughter.

It was at this point that things started to go horribly wrong.

Emma suddenly started losing a lot of blood. The midwives became concerned, as the bleeding was heavy and Emma was changing pads often.

The doctors were called to see her and it was found that Emma was suffering with a severe postpartum haemorrhage due to uterine atony, which is where her uterus failed to contract as it was too tired from labour.

Emma says: ‘The midwife who was now looking after me had noticed I was losing a lot of blood, so she kept a very close eye on me.

‘However, it was showing absolutely no signs of stopping, so a doctor came to see me and tried several methods to stop the bleeding – but nothing was working. It was all very surreal.

‘The only option now was to go back into theatre and be put under general anaesthetic.’

Emma was told that she may possibly need a hysterectomy and had to sign a consent form for that particular surgery before she went back into theatre.

Luckily, this surgery wasn’t needed, but Emma still had to undergo multiple operations on her uterus.

‘They tried a Bakri balloon first, which they filled with water to try and compress the blood vessels,’ Emma explains. ‘This unfortunately didn’t work and I was still bleeding heavily, so they tried a B-Lynch suture, where they had to stitch my uterus.

‘I believe if this hadn’t have worked, the only other option was a hysterectomy.’

Emma had lost 4.5 litres of blood in total. While in theatre, she had a blood transfusion to replace the blood she had lost.

Luckily, the second operation was a success and she was taken to a recovery room not far from the theatre, just in case anything was to happen shortly after.

But recovery was hard, both physically and mentally.

Emma felt ‘very weak’ for weeks afterwards and it took her a week just to be able to get out of bed by herself.

Once she came around from the surgery, Emma asked to see Toby and Amelia. It had been over four hours since she’d seen her new baby.

She recalls: ‘From there, I was taken to the High Dependency Unit for the day while I recovered and then to the IC room on the delivery suite – while Amelia had to go to NICU, because she was unable to stay with me.

‘I just remember lying in the bed in absolute agony, waiting for the morphine to kick in and just going in and out of sleep.

‘It was when I was back on the ward that I wanted Amelia back, but I physically couldn’t look after her by myself. The nurses would bring her back down to me once Toby and his mum or my mum was visiting.

‘I remember being in a lot of pain afterwards and I was so weak, I could barely hold my baby for long.

‘I felt so useless not being able to look after her. When I was alone, I would get upset – as I was trying to come to terms with what had happened and I was having flashbacks, as I was so traumatised.

‘Although I know if it wasn’t for the midwives and doctors looking after me, I know things could have been so different. They were all amazing and technically saved my life and we will be forever grateful!’

Emma recovered well physically after her surgery, but still feels the mental scars of the traumatic birth.

She struggled with flashbacks for some time, although she has now received treatment.

Emma said: ‘I had EMDR therapy for six months and we have also seen the Sister midwife again a few times, as she runs the Birth Afterthoughts, a birth debrief service at our local hospital.

‘It has really helped us understand what happened and why and has also helped us piece together events that weren’t clear.’

Emma and Toby would love to have another baby in the future – but due to the mum’s experience another birth would be risky, so they’re weighing up whether to go through it all again.

Emma adds: ‘If we did decide to have another baby, I would definitely opt for an elective c-section, to try and reduce risks as much as we can. Although there is still a chance I could have another postpartum haemorrhage – no one can predict what is going to happen.

‘We’ll just have to see what the future holds!’