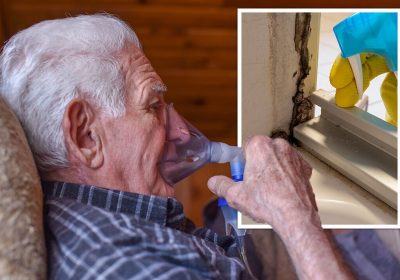 According to Shelter, one in five renters are currently affected by damp and mould in Britain. “A person can feel the effects of mould exposure in as little as two hours,” Dr Tang cautioned. “And the effects can last for one to three days.” For those exposed to mould on a daily basis, “they may be short of breath, cough frequently and have a sore throat”.

Mould toxicity can also “interfere with leptin – a hormone that regulates appetite and fat storage”, which leads to unhealthy weight loss.

Living in a mouldy home can lead to:

“In extreme cases a person can develop aspergillosis – a condition caused by inhaling tiny particles of mould,” said Dr Tang.

“These mould spores can grow inside the lung cavities creating a ball of mould in the lungs, which can require surgery to remove if medication does not work.”

The Centres for Disease Control and Prevention (CDC) says: “Aspergillosis is an infection caused by Aspergillus, a common mould.”

People who have a weakened immune system, or lung disease, are more prone to the infection when exposed to the fungus.

Symptoms can mimic asthma symptoms, causing a person to wheeze, cough, be short of breath, and have a fever.

The infection could also lead to: headaches, a reduced ability to smell, a runny nose, and stuffiness.

“Those most at risk are people who already have a lung condition like asthma or chronic obstructive pulmonary disease (COPD),” Dr Tang confirmed.

People with asthma are more likely to experience asthma attacks living in a mouldy home, which can be life-threatening.

Dr Tang warned: “If mould intoxication has spread to the lung and sinuses, it could cause permanent lung damage known as fibrosis and sometimes even death.”

He advised: “f you have spotted mould in your home, monitor it and keep a check on your health.

“Don’t put yourself or loved ones at risk. If there is any doubt, seek professional advice.”

If mould is in your home, Dr Tang recommends improving air flow by opening the windows and to ensure air vents are working.

“If there are small areas of damp on walls or windows, clean them with a mixture of water and bleach,” he said, adding: “Wear a mask while doing this and protective gloves.”

Dr Tang added: “However, if you suspect mould could be harming your health and you are displaying symptoms of mould toxicity speak to a mould expert.”

Signs of mould in the home

The Department of Health, New York State, says “you can usually see or smell a mould problem”.

“Mould can appear as slightly fuzzy, discoloured, or slimy patches that increase in size as they grow,” the organisation notes.

“Most moulds produce musty odours that are the first indication of a problem.”