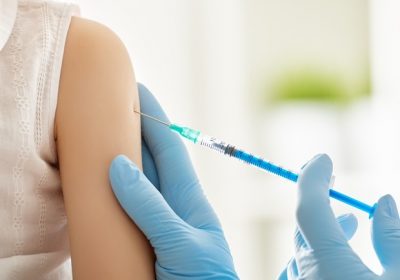 Even though COVID-19 vaccines are safe, effective and widely available in the United States, many Americans are still hesitant to get vaccinated. Indeed, there are stark disparities in COVID-19 vaccination rates across the United States: In some counties, almost all residents are vaccinated while, in other counties, only a minority of residents are vaccinated. A new study from USC researchers sheds light on the beliefs that underlie these consequential disparities in vaccination rates.

The study, published Wednesday in American Psychologist, found that, in line with what we already know about vaccination behavior, structural barriers such as access to health care, historic undervaccination and political barriers explained why residents of some counties were less likely to be vaccinated against COVID-19. Beyond that, however, the researchers showed that we need to consider Americans' moral values to understand the stark disparities in COVID-19 vaccination rates.

"If you look at a map of the proportion of vaccinations across U.S. counties, you find very stark differences across counties, across regions and across states," said Nils Karl Reimer, study co-author and postdoctoral researcher at the USC Dornsife College of Letters, Arts and Sciences. "Our goal is to interrogate why these differences in political ideology coincide with differences in vaccination rates. We know already that, especially in the United States, conservatives and liberals endorse different values.

The study rests on moral foundations theory, which argues there are five basic moral foundations: care, fairness, loyalty, authority and purity. Relying on data collected from the crowd-sourced website yourmorals.org -; an online platform which collects an array of psychological data -; the researchers estimated county-level moral values and county-level conservatism. This data was integrated with county-level vaccination rates from the Centers for Disease Control and Prevention, the U.S. COVID-19 Vaccine Coverage Index and presidential election data to control for variables not included in the study.

The researchers' analysis found moral concerns about fairness, loyalty and purity influenced county-level vaccination rates, but not care or authority. Counties with residents who prioritized purity were 0.8 times less likely to be vaccinated. The researchers pointed to previous research which shows that "conservatives care more about contamination and things they find disgusting."

We found that some values that are traditionally associated with conservatism were associated with lower vaccination rates, the biggest of which was a desire for bodily and spiritual purity. Endorsing these beliefs is related to all kinds of opinions such as being opposed to non-mainstream sexual practices or immigration."

On the other hand, counties with higher loyalty were 1.14 times more likely to have higher rates of vaccination. Or, if loyalty increased while other values remained the same, the vaccination rate could be expected to rise 3% countywide. Placing a high value on fairness was associated with a 2% increase in vaccination rates in similar conditions.

To test the accuracy of the model, the researchers compared it against two other models: one, which included only structural and demographic predictor variables, and another in which partisanship was an additional predictor variable. Both models failed to predict county-level vaccination rates as accurately as the third model, which also included county-level endorsement of moral concerns.

Anti-vaccination tied to higher valuation of purity, regardless of political party

"The loyalty finding is quite surprising because there is a lot of rhetoric about anti-vaccination among conservatives. However, what we're showing is that typical conservatives do not tend to be anti-vaxxers," said co-author Morteza Dehghani, associate professor of psychology and computer science at USC Dornsife. "The anti-vaxxers tend to be not high on loyalty, but high on purity. These include conservatives who are low on loyalty, and also liberals who tend to prioritize purity concerns, most likely focusing on bodily aspects of purity contamination ('My body is a temple and it should not be contaminated')."

"It is a sentiment you might find on both sides of the aisle," Reimer added, "and I think that's the great value of our approach because it gives a more fine-grained analysis. Conservatism is a constellation of different beliefs that don't always belong together logically."

While these new findings support the claim that county-level moral values predict COVID-19 vaccination rates, the researchers stressed that policymakers should exercise caution when utilizing these insights. For instance, the results from the county level cannot be extrapolated to smaller (cities, neighborhoods, individuals) or larger (states) groupings.

The findings present policymakers and public health communicators with data by which to better reframe their public health communications related to the pandemic. The researchers suggest appealing to loyalty concerns by framing vaccination as a patriotic duty to fellow citizens. In regions high in purity, they suggest communications emphasizing the vaccine's ability to protect from contaminating disease to better appeal to vaccine skeptics.

"I think a lot of people who are skeptical of vaccination might think of it as a foreign chemical introduced into your body," Reimer said. "This sounds very scary, like something you wouldn't necessarily want to put in your body, but I think framing it in terms of the natural immune system response could resonate with some skeptics. These things are, importantly, mere speculation before further experiments, but our findings could point toward public health messaging that could be tested."