Mike Love: The Beach Boys star, 80, has a top tip for good health – ‘absolutely saved me’ 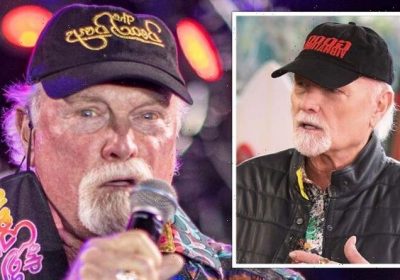 The Beach Boys – I Get Around

In the 60s, The Beach Boys were competing with The Beatles as the world’s favourite boy band. A lot of artists crack under that kind of overwhelming pressure, resorting to drugs and drink. The original members of The Beach Boys weren’t an exception. Dennis Wilson drowned in 1983 after a big day of drinking, and his older brother Brian, still alive, has dealt with a cocaine and heroin addiction. The youngest brother Carl, who died at 51 from Lung Cancer, also used heroin.

Love, on the other hand, has surfed the waves of gigantic success and is the only member of the original band still performing as part of The Beach Boys.

The difference between Love and others is that he didn’t take drugs.

In an interview with the Daily Mail in 2019, which he partook in while on a health retreat, the star revealed that he took a different approach to dealing with the pressure of being a world famous boy band –meditation.

He said: “My inspiration is Tony Bennett, who’s in his 90s and still sounds fantastic… If you’re healthy and if people want to hear you perform, there is no reason to retire.

“It absolutely saved me… There are many ways to relax. Alcohol, marijuana, other drugs, but they all have side effects.”

Love first got into practice called transcendental meditation under the instruction of an Indian Yogi called Maharishi Mahesh.

He was taught alongside The Beatles by Mahesh on a trip to India in 1968.

The practice, which is used by a lot of famous names such as Ellen Degeneres, involves sitting for 10-15 minutes and listening to a mantra and paying attention to nothing but that.

“I knew quite a few people who went in that direction. But if you learn transcendental meditation you’re already relaxed…

“It was heartbreaking to see my own family members destroying themselves through drink and drugs.”

Hundreds of studies have been conducted on the benefits of transcendental meditation, and it turns out there are many as Love suggested.

One peer reviewed study published in the journal Behavioral Medicine instructed 103 people with heart disease to do the practice for four months.

Talking about the benefits of the practice in 2014 to Portland Tribune, he said: “It gives you a sort of high without having to resort to alcohol and drugs. That’s been a big benefit to my life.

“You have the clarity and energy to entertain the types of activities we do with traveling and rehearsing and performing.

“When you meditate, all those feelings of grogginess and irritation and fatigue are eliminated.

If you think that you might have a drug or alcohol addiction, going to your GP is a good place to start.

They may refer you to a treatment centre.

Instead of going to the NHS, there are also drug helplines which can provide guidance for you or someone you think might be struggling with addiction.