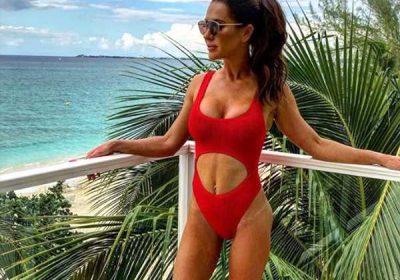 Jessica Mulroney has the perfect clap back for online trolls who body shamed her after she posted a swimsuit photo this week from a vacation to the Cayman Islands.

“Note to self,” the 39-year-old celebrity stylist said in an Instagram post on Monday. “Never ever post another picture of myself in a bathing suit. Only wear parkas by the beach.”

“Apparently a picture in a bathing suit is offensive to my career, some followers and my children,” Meghan Markle‘s friend wrote in the caption, referencing some of the trolls’ criticism. “So guess what… I don’t care. Thank you to my strong followers who get it. Everyone else, get a clue.”

Former Bachelorette Kaitlyn Bristowe supportively commented, “I’d wear a bathing suit to get the mail if I were you.”

Mulroney first shared a photo of the swimsuit in question earlier on Monday, writing in the caption, “Brings ten bathing suits… only gets to wear one on a balcony. All work no play in Cayman. I WILL BE BACK to play in the water with the kiddies.”

In the snap, Mulroney poses in a bright red one-piece with a large cutout over her midsection, showing off her toned abs. She topped off the look with aviator sunglasses and a high ponytail.

This isn’t the first time that Mulroney has stood up against trolls.

In August, the I Do Redo host shared a photo of herself in an electric blue bikini that revealed her derriere. Mulroney admitted that she posted it once, only to delete because of the volume of negative comments she received. But ultimately, she decided to post the snap again.

“I took this down after posting it yesterday. Too many trolls attacking,” she wrote in the caption. “But I realized today, I dont care. I work hard on every aspect of my life and I’m proud of my body. I’m proud of the work I do. I’m proud that Im driven. Im proud of it all.”

“And if we can’t be proud of ourselves, then what’s the point,” she added, declaring, “No more apologies.”

Later in August, Mulroney used her platform to stand up for her best friend, Meghan, after the royal received backlash of her own when she and Prince Harry used a private jet to fly to the south of France.

After sharing tweets from actress Jameela Jamil, who also spoke in support of the royal couple, on her Instagram story, Mulroney wrote in an Instagram post, “When someone faces unfair criticism, you call it out.”

“When that person is your friend and your family, you call those critics what they truly are,” she continued. “Shame on you, you racist bullies.”

In the caption, she added, “3 years of undeserved hate and abuse. It’s enough.”