Many teens have low iron, B12 levels years after bariatric surgery 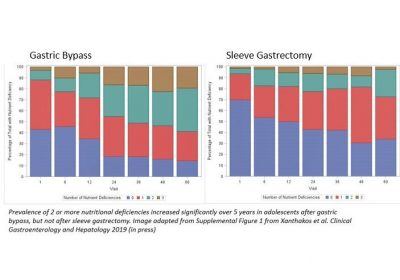 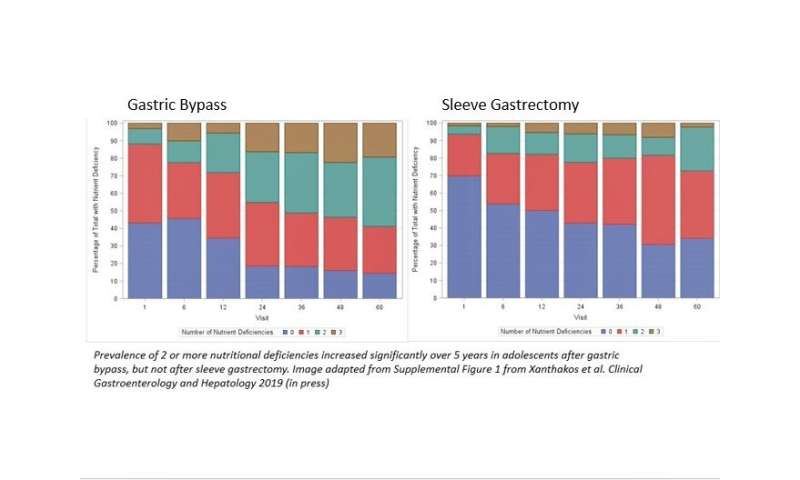 The good news: bariatric surgery can be a life-changer for severely obese teens. Not only do young people experience dramatic weight loss, they also benefit from near-immediate improvement of diabetes plus longer-term reductions in heart health risks.

However, these benefits come with a caution: recipients may develop nutritional deficiencies years after treatment that can carry their own health risks if not properly managed. Also, one of the two primary forms of bariatric surgery, gastric bypass, appears to cause more nutritional disruption than the other, vertical sleeve gastrectomy.

Findings from this study, led by experts at Cincinnati Children’s, were published online Nov. 8, 2019 in the journal Clinical Gastroenterology and Hepatology.

“This study highlights the importance of annual nutritional screening”, says Stavra Xanthakos, MD, Medical Director, Surgical Weight Loss Program for Teens at Cincinnati Children’s and first author of the study. “We also found that the risk of nutritional deficiency is lowest in patients with the highest intake of recommended vitamin and mineral supplements, so these risks can be minimized with appropriate supplementation and good adherence.”

In this study, Xanthakos, senior author Heidi Kalkwarf, Ph.D., RD and their surgical colleagues, including Michael Helmrath, MD at Cincinnati Children’s and Thomas Inge, MD, Ph.D. at Children’s Hospital Colorado, focused on the nutritional impacts of the two most common forms of the surgery: Roux-en-Y gastric bypass (RYGB) and vertical sleeve gastrectomy (VSG). Their findings, five years after treatment:

What are the risks from low iron and low B12?

“Both B12 and iron deficiency can cause anemia, and B12 deficiency can also cause significant neurological dysfunction,” says senior author Kalkwarf. “If caught early, dietary supplements can minimize these risks, which is why annual nutrition testing is so important. It’s also important to eat a well-balanced diet in addition to taking supplements and involve a registered dietitian in the pre- and post-operative care of these patients” 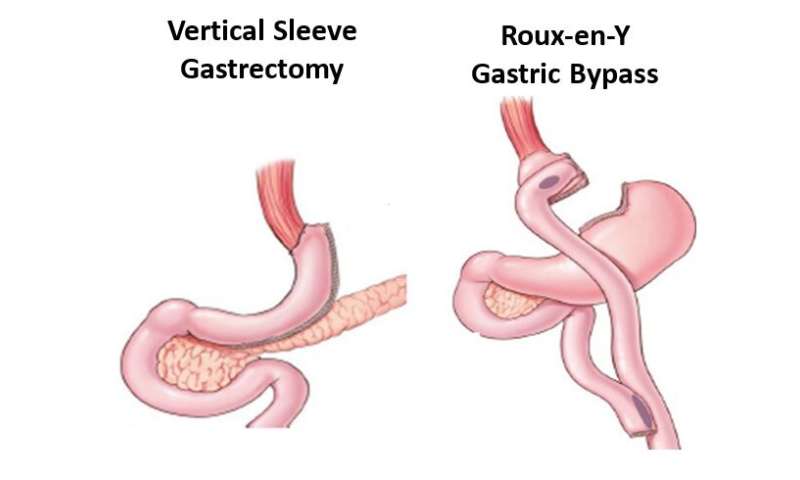 Untreated, the most common symptoms of iron deficiency anemia in adults include fatigue, weakness, and exercise intolerance. In young children, iron deficiency also can lead to cognitive impairment, but it is not known if developing iron deficiency in adolescence would have the same effect.

People with B12 deficiency also can suffer from anemia, but also can experience symptoms of depression, irritability, cognitive slowing, and forgetfulness. With severe deficiency, some can develop numbness or tingling in extremities, gait problems, and partial paralysis.

Benefits of surgery outweigh these risks

“In our bariatric surgery program at Cincinnati Children’s, all patients get annual micronutrient and nutritional assessments as recommended. It’s also important for them to continue annual nutritional screening after they transition to adult care later in life,” Xanthakos says.

“The positive message is that the risk of nutritional deficiency can be minimized with appropriate dietary supplementation, so these procedures should not be avoided solely due to nutritional concerns,” says Inge, Teen-LABS Principal Investigator. “These procedures are very helpful for severely obese adolescents, especially those struggling with diabetes, severe fatty liver disease or sleep apnea.”

Longer term follow-up is also important to detect any other consequences from surgery, such as changes in bone health. “For pediatric surgeons, these findings suggest favoring the VSG procedure as the first line approach in teens,” says Inge.