Lung cancer symptoms: Two signs on your eyes – ‘see your doctor right away’ 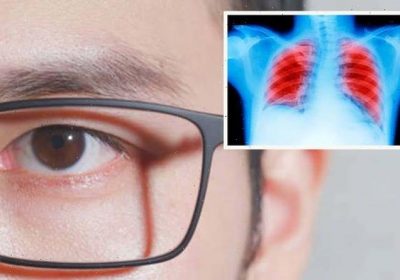 Around 47,000 people are diagnosed with lung cancer every year in the UK, according to the NHS. Treatment depends on the type of mutation the cancer has, how far it’s spread and how good your general health is. It is important to go to your doctor when you first notice symptoms, as if cancer is found at an earlier stage treatment is more likely to be effective. Some lung cancers can cause syndromes, which are groups of specific symptoms.

The NHS says that lung cancer mainly affects older people, and is rare in people younger than 40.

More than four out of 10 people diagnosed with lung cancer in the UK are aged 75 and older.

The American Cancer Society says cancers of the upper part of the lungs are sometimes called pancoast tumors.

It says pancoast tumors can affect certain nerves to the eye and part of the face, causing a group of symptoms called Horner syndrome.

It says that signs may include drooping or weakness of one upper eyelid, a smaller pupil in the same eye and little or no sweating on the same side of the face.

The NHS says: “Lung cancer does not usually cause noticeable symptoms until it’s spread through the lungs or into other parts of the body.

“This means the outlook for the condition is not as good as many other types of cancer.”

You should see a doctor if you have symptoms including a persistent cough, are coughing up blood, or have persistent breathlessness.

Signs may also include unexplained tiredness and weight loss, or an ache or pain when breathing or coughing.

Your doctor might carry out routine blood tests and find that you have a raised platelet count, as this might be a sign of lung cancer.

Cancer Research UK says that finding lung cancer early can mean that it’s easier to treat, so if you notice any changes get them checked out by your GP as soon as possible.

People who smoke have the greatest risk of lung cancer, though lung cancer can also occur in people who have never smoked.

Smoking is the most common cause, accounting for about 72 percent of cases.

The NHS says If you smoke more than 25 cigarettes a day, you are 25 times more likely to get lung cancer than a non-smoker.

If you do not smoke, frequent exposure to other people’s smoking can increase your risk of developing lung cancer.

Your risk of lung cancer is higher if you have a close relative (such as a parent or sibling) who has had lung cancer.

Exposure to certain chemicals and substances which are used in several occupations and industries may increase your risk of developing lung cancer.

Cancer can spread into the lung from other parts of the body. This is called metastatic lung cancer. There is no national screening programme for lung cancer in the UK.

Trials and studies are assessing the effectiveness of lung cancer screening, so there may be screening opportunities in the future.