Home » Health News » 'Love Is Blind' stars Giannina and Damian are back together, but Damian doesn't regret saying 'I don't' at the altar

'Love Is Blind' stars Giannina and Damian are back together, but Damian doesn't regret saying 'I don't' at the altar 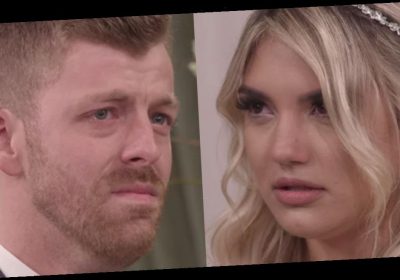 One of those was the engagement between Giannina Gibelli and Damian Powers, when Damian told Giannina he couldn't marry her and she stormed out of the chapel in embarrassment.

But during the show's reunion episode, Damian and Giannina sat next to each other and revealed to hosts Vanessa and Nick Lachey that they're still dating.

"Looking back, I respect his decision," Giannina said. She added that their current dating arrangement, which involves them living in separate homes but seeing each other daily, has been much better because they can get to know each other at their own pace.

At the same time, Giannina acknowledged that Damian's decision hurt her in the moment.

Damian went on to apologize to Giannina for the way his decision made her feel.

"I'm sorry that I ever put her through that," he said, adding that saying no to their marriage was the hardest decision he's ever made.

Although Damian felt bad about how everything happened at the wedding, he said that he doesn't regret his decision because he knew they had to work on their communication and relationship dynamic before committing to marriage.

"I would stick by [that decision] again because of where we are now," he said.

After Damian apologized to Giannina at the reunion, she explained how their relationships had evolved over the past year.

She admitted that, during filming, she expected Damian to read her mind and didn't actively communicate her concerns or relationship needs. As a result, she often picked fights with Damian. "I just let it out in very non-constructive, insensitive ways," Giannina said.

She then went on to apologize to Damian for how she treated him during the show.

"Looking back at it now, it's like, how did you come about and be so calm and patient with me? I really want to take that time to apologize to you. I never wanted to hurt you either," she said.