Link between alcohol and cancer is ‘ignored by middle-aged women’ 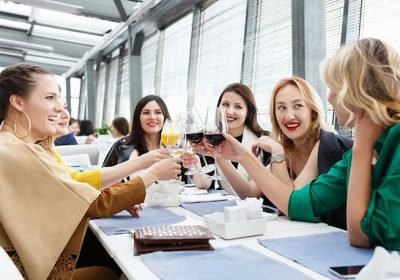 Middle-aged women are not getting the message about the proven link between alcohol and breast cancer, new research suggests.

Females in their 40s, 50s and 60s are still consuming large mounts of wine, beer and spirits despite rates of the disease rising in their age brackets.

Data from Flinders University in Adelaide shows a disconnect between the cause and effect, despite public awareness campaigns.

But they accept alcohol can result in weight gain and lead to relationship breakdowns. 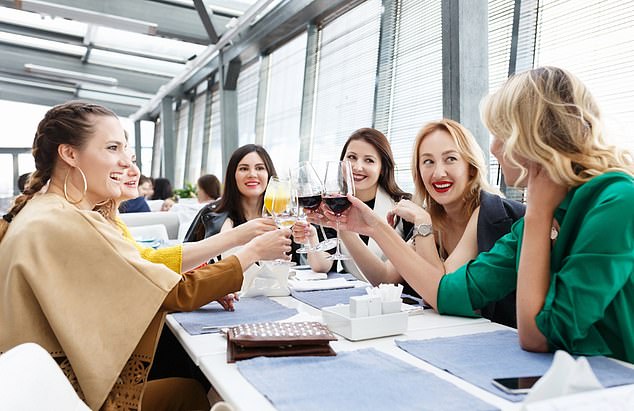 Did you know? Women in their 40s, 50s and 60s are still consuming large mounts of wine, beer and spirits despite rates of breast cancer increasing in their age brackets (stock)

Study lead author Dr Emma Miller said: There is a low level of awareness about the established link between alcohol and breast cancer, and some confusion about the risk given the community perception that not all drinkers get breast cancer.

‘So it’s really important to understand the patterns and drivers behind drinking behaviour in order to develop policies and interventions that might reduce the increasing burden on the women and our health system.’

As part of the study, 35 South Australian women – aged between 45 and 64 – who have never been diagnosed with cancer, were interviewed about their alcohol consumption, education level and perceived risk of breast cancer.

‘Alcohol is firmly entrenched in the fabric of Australian society, providing pleasure and defining the major events in most of our lives,’ she said.

‘Raising awareness of alcohol-related cancer risk, despite the importance of this, will not be sufficient to counter patterns of consumption.’ 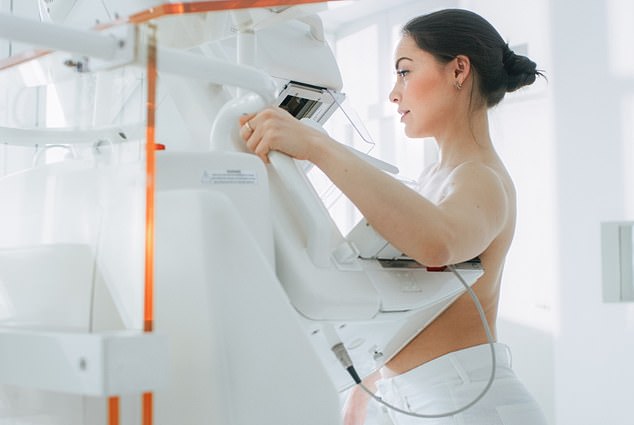 Breast cancer is the most commonly diagnosed cancer in Australia, accounting for more than 13 per cent of all new forms of the disease and 28 per cent of all cancers in women (stock)

Dr Miller added: ‘We all want to hear good news about drinking, such as small amounts of red wine may be good for cardiovascular disease, which is a message that’s promoted by the alcohol industry.

‘In contrast, information that alcohol is linked to breast cancer is actively suppressed by the industry presumably in order to build the female customer base.

‘Our research shows that while more middle aged women are drinking, there are ways of getting the right messages through by focusing on issues important to them.

‘For example, younger people are drinking less so we can look into the reasons behind that and utilise them.’

WHAT IS BREAST CANCER, HOW MANY PEOPLE DOES IT STRIKE AND WHAT ARE THE SYMPTOMS?

What is breast cancer?

Breast cancer develops from a cancerous cell which develops in the lining of a duct or lobule in one of the breasts.

When the breast cancer has spread into surrounding breast tissue it is called an ‘invasive’ breast cancer. Some people are diagnosed with ‘carcinoma in situ’, where no cancer cells have grown beyond the duct or lobule.

Most cases develop in women over the age of 50 but younger women are sometimes affected. Breast cancer can develop in men though this is rare.

The cancerous cells are graded from stage one, which means a slow growth, up to stage four, which is the most aggressive.

A cancerous tumour starts from one abnormal cell. The exact reason why a cell becomes cancerous is unclear. It is thought that something damages or alters certain genes in the cell. This makes the cell abnormal and multiply ‘out of control’.

Although breast cancer can develop for no apparent reason, there are some risk factors that can increase the chance of developing breast cancer, such as genetics.

What are the symptoms of breast cancer?

The usual first symptom is a painless lump in the breast, although most breast lumps are not cancerous and are fluid filled cysts, which are benign.

The first place that breast cancer usually spreads to is the lymph nodes in the armpit. If this occurs you will develop a swelling or lump in an armpit.

How is breast cancer diagnosed?

If you are confirmed to have breast cancer, further tests may be needed to assess if it has spread. For example, blood tests, an ultrasound scan of the liver or a chest x-ray.

How is breast cancer treated?

Treatment options which may be considered include surgery, chemotherapy, radiotherapy and hormone treatment. Often a combination of two or more of these treatments are used.

How successful is treatment?

The outlook is best in those who are diagnosed when the cancer is still small, and has not spread. Surgical removal of a tumour in an early stage may then give a good chance of cure.

The routine mammography offered to women between the ages of 50 and 70 mean more breast cancers are being diagnosed and treated at an early stage.