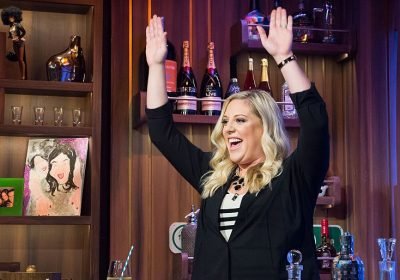 Briana Culberson just celebrated her 32ndbirthday in a big way: with an epic cheat meal. The daughter of Real Housewives of Orange County’s Vicki Gunvalson has been coined the “Keto Queen” after losing a combined 86 pounds with her husband, Ryan Culberson, while following the low-carb diet. (She has reportedly lost more than 40 pounds while on the diet.)

On April 8th, Ryan shared a series of Instagram stories about their epic diet-free day. First, the North Carolina parents started at Dane’s Chicken and Waffles. Ryan captioned a photo of the menu, “It’s Briana’s birthday and she wants to cheat so here we are!”

The story continued with shot of chicken and waffles, macaroni and cheese, and collard greens. Ryan posted that he also took a break from his keto diet for the day. “I seriously need a wheelbarrow to roll me out!” he captioned the food photo.

Next, he shared an image of a chocolaty coffee drink from Salvation Coffee Company, followed by a photo of Briana enjoying a beer at Hooters captioned “Birthday shenanigans.”

It looks like Briana is sitting at the bar with a friend in the next shot, sipping her pint and smiling.

Briana has been open on social media about how changing her diet and using KetoLogic meal replacements has impacted her health and wellbeing: She attributes the fact that she’s lost 45 pounds and doesn’t suffer from as many lupus flare-ups as she once did to her keto diet. Ryan often posts about the couple’s keto weight-loss journeys on his Instagram account and shared that the couple has been following the Keto 30 Challenge, which involves replacing one meal a day with a KetoLogic replacement shake, eating two low-carb meals, and drinking one or two KetoLogic BHB drinks a day.

Kudos to Briana for the keto success—and for taking a break from her diet to enjoy her birthday!