Jimmy Carr health: Comedian says depression is like ‘falling within a black void’ 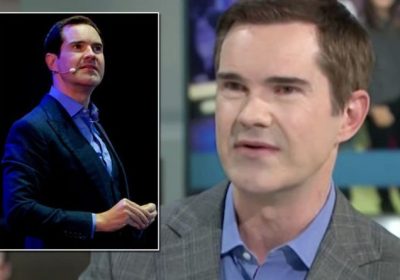 The 8 Out of 10 Cats Does Countdown presenter appeared on Good Morning Britain this morning and touched on his experience with anxiety and panic attacks. This is not the first time the star has talked about his mental health. In his recent memoir Before & Laughter which the star wrote as a self-help book, Jimmy admirably opens up about the tougher moments in his life.

Jimmy speaks candidly about the comedy trade and how it is commonplace for comedians to have had at least one sick parent. In light of this tragedy they tend to “make things okay with humour,” thus getting into the industry in the first place.

For Jimmy it was his mother who suffered from depression after separating from her husband – Jimmy’s father – in 1994. Due to her condition the star found himself becoming a sort of surrogate partner for her, friend-zoning girls of his age and deciding instead to focus on his comedy career.

In addition to looking after his mother, Jimmy was suffering with his own problems. He states that anxiety has been a “constant hum in [his] life,” and depression also comes in “occasional crashes”.

Talking to The Guardian Jimmy described his first interaction with depression “like vertigo, the sensation of falling within a black void.”

He went on to address that the national lockdown’s did not help with his mental health, adding: “Can you remember there was an ad campaign about five years ago saying that one in four people have experienced a mental health problem? Well, I think after Covid, we can round that up to … f** everyone.”

Despite acknowledging his own demons, the star remains to say that he still counts himself as “lucky” when it comes to depression.

He continued to say that he can “white-knuckle it” and get through depressive episodes without medication, whereas a lot of people – including fellow celebrities – cannot.

Depressive episodes can occur almost every day for some individuals. These episodes are when people suffer suffer the following symptoms of depression:

Jimmy states that he only suffers from symptoms such as these “occasionally,” and admits that he tries “not to think about it” in order to avoid it.

In addition to depression and anxiety Jimmy detailed how he turned to alcohol to “get out is [his] head”.

Although there is no “great rock-bottom story” with the star and alcohol, he does explain that he drank for the wrong reasons, which led him to spending the first 12 years of his comedy success avoiding alcohol completely.

Jimmy added: “You have better conversations. The only thing about being sober around comedians is that, around 2am, you might as well f*** off home. You’re just gonna be told the same anecdote again.”

The star has similar views about drugs: “I’ve tried everything once, but I’m not a drug person.

“I’ve met people who are funnier after a couple of pints. But I’ve never once in my life met someone and gone: ‘Oh, he’s a bit quiet, but you’ve got to meet him after he’s had some cocaine.”

The Addiction Center states that people who suffer with depression are often seduced by the sedative effects of alcohol.

This means that they tend to use it as a kind of medication to help temporarily distract them from persistent feelings of sadness. However, this often leads to a damaging cycle of abusing alcohol and can make depression symptoms worse.

Several other disorders, such as those below, include depression as a symptom. These include conditions such as:

Luckily, there are dozens of treatment options available to you or a loved one who is suffering from depression. In most cases, depression must be treated with a combination of therapies. Some of the most common include: