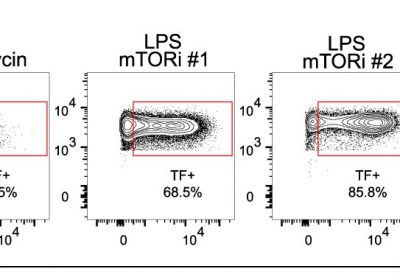 Therapeutically inhibiting a metabolic regulator in monocytes unexpectedly increased inflammatory signaling, according to a study published in the journal Communications Biology.

Bacteria with surface molecules called lipopolysaccharides (LPS) reside in the gastrointestinal tract. These molecules can break free from bacteria and travel into the bloodstream when the normal gut barrier preventing this is disrupted. The molecules can then activate an innate immune response in monocytes and trigger inflammatory signaling throughout the body. This response of the monocytes relies on the mechanistic target of rapamycin (mTOR), a kinase that forms two complexes—mTORC1 and mTORC2—that regulate metabolic pathways.

Previous work has shown that inhibiting mTOR in T-cells decreases response to such stimuli that cause the production of pro-inflammatory products such as cytokines, which maintain the activation of other immune cells. That work demonstrated that inhibiting mTOR also potently prevented HIV from infecting T-cells at early steps in its replication, suggesting the approach may decrease chronic inflammatory issues in people living with HIV who have elevated levels of mTOR activation thought to be due to translocation of LPS across a compromised gut barrier.

With these findings in mind, the investigators hypothesized that decreasing inflammation would also occur when inhibiting mTOR in other immune cells, specifically monocytes. But to their surprise, this wasn’t the case.

“We thought we could turn down the dial of mTOR with known anti-inflammatory therapeutics that suppress it’s activity in other cells, but we saw this completely opposite effect and learned that mTOR does something a little bit different in these innate immune cells,” Taylor said.

Using multi-omics analyses, the investigators discovered that pharmacologically inhibiting mTOR in monocytes actually increased the production of several pro-inflammatory cytokines and a protein called tissue factor that increases blood clotting. Notably, mTOR inhibition prevented the intracellular production of NAD+, a metabolite necessary for turning off the switch of transcription from inflammatory gene promoters.

“Normally what happens is when you activate a monocyte with LPS, mTOR basically triggers NAD+, which then can slow down and bring back to normal the briefly elevated levels of inflammatory products. But if you inhibit mTOR, that feedback loop that brings everything back down to normal goes awry, so then the inflammation just continues and gets worse,” D’Aquila said.

The findings may help inform current therapeutic approaches to better treat patients with HIV and other viral diseases, including COVID-19, in which pro-inflammatory monocytes are known to play a role in causing disease.