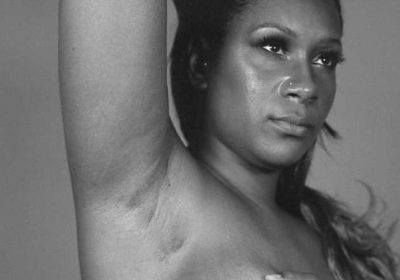 Hollie is a digital writer at Stylist.co.uk, mainly covering the daily news on women’s issues, politics, celebrities and entertainment. She also keeps an ear out for the best podcast episodes to share with readers. Oh, and don’t even get her started on Outlander…

Breast cancer survivor and campaigner Leanne Pero has just been awarded the Health Award at the 2020 National Lottery Awards for supporting Black cancer patients and survivors. This is her incredible story.

In 2016, Leanne Pero treated herself to a holiday. She had spent the year nursing her mum through recovery after a second cancer diagnosis, and wanted to get over everything now that her mum had been given the all-clear. But Leanne couldn’t enjoy the trip: she’d noticed a lump in her breast and felt constantly exhausted.

As a fit and active 30-year-old woman who had run a community dance school for over a decade, she was concerned about her health and went to get checked out as soon as she returned home. The male doctor told her she had nothing to worry about. “It’s very rare to have cancer at your age,” he said.

But research suggests Black women are more likely than white women to get triple-negative breast cancer, a kind of breast cancer that often is aggressive and comes back after treatment. So Leanne made another appointment with a female doctor a couple of months later, who promised to take it seriously and look into the lump properly.

Days before her 31st birthday, Leanne was diagnosed with breast cancer.

“You don’t just get told you’ve got cancer,” Leanne tells Stylist, “You get told so many other things: ‘You haven’t started a family yet, so you’ll need to preserve your eggs because you’ll find it hard to conceive. The type of breast cancer you’ve got can only be helped by chemotherapy. You don’t have other options because it’s advanced.’”

Unsurprisingly, Leanne was in a state of shock after the diagnosis. But what really kept her from telling people the bad news was a sense of shame. “Why did my body fail me at 30?”was a question she tormented herself with. It also didn’t help that the few close people she did tell said things like: “‘Oh, it’s your drinking,’ ‘But you’re so young,’ and‘I’ve never seen a young Black girl like you get cancer.’”

She continued to notice a stigma attached to conversations around cancer in the chemo ward she attended, where other women were also on their own because they hadn’t told people they’d been diagnosed. And it wasn’t just the physical and social side of things that were challenging.

“As I neared the end of treatment, my mental health took a battering,” she says. “Cancer had rid me of everything that society had told me I need as a young woman. My periods had stopped and I didn’t know if they’d come back. I lost every single piece of hair on my body. I put on two stone, my face was really puffy, my skin went bad, I didn’t feel like a woman.”

But when Leanne looked for support, she struggled to find any that was dedicated to young, Black women. One nurse told her to turn to Google for information, while another said she looked “too young” to be attending a support group at the hospital. “And I was the only Black girl in there,” she recalls. “The other 18 people were middle-aged white women. They were lovely, but there was no one I could relate to.

This led Leanne to take matters into her own hands. She started writing journals on a blog, which prompted other women from Black and Asian communities to contact her. They decided to meet together in a hired meeting room in Leanne’s office, where they all sat to eat home-baked cake and talk about their experiences.

“People need to talk more about cancer but, culturally, we’ve always been told to ‘keep your business to yourself and keep your head down,’” says Leanne. “Cancer advertisements also have a massive part to play: when I was diagnosed, there weren’t any pictures of young Black women with cancer. And charities didn’t openly say they were running support groups for BAME communities.”

And that’s when her platform, Black Women Rising, was born, as part of The Leanne Pero Foundation.

The platform aims to get more Black female cancer patients connecting and talking about their cancer experiences, while aiding their recovery process in peer-to-peer support groups. As part of its growing work, The Black Women Rising project created the UK’s first all-Black cancer portrait exhibition that has toured London’s Southbank, The Oxo Tower, and is due to exhibit at the Tate Gallery in 2021. It’s also had members featured in many cancer awareness brand campaigns including Stella McCartney, Estée Lauder Companies Breast Cancer Campaign and GHD. And with a magazine and podcast recently launched this month, the empowering platform is getting stronger each day.

“Everything we do is around getting these untold stories heard,” Leanne explains. “For a lot of the women, they tell their story because it’s the first time they have spoken it out loud. They get so much out of being free in talking about stuff that’s been buried deep.”

Of course, the coronavirus pandemic has created awful challenges for cancer care.

Breast Cancer Now recently estimated that almost a million British women have missed a breast cancer screening appointment because of the pandemic. Cancer Research UK says the number of cancer treatment referrals drastically dropped by over 26% between April and July compared to the same period last year. And research recently published in The Lancet Oncology journal suggests there could be more than 3,500 avoidable cancer deaths in England in the next five years because of Covid-19.

“We obviously haven’t been able to do face-to-face stuff and we’ve had to go online,” Leanne explains about the impact on Black Women Rising. “A lot of people’s treatment stopped, and a lot of people have been suffering with extra anxiety and worry. Some charities have had to close their doors, especially with staff on furlough, but we’ve been at the forefront to support the work for people in our communities. We’ve responded to these new needs.”

And the work has not gone unnoticed. Last week, Leanne was awarded the Health Award at the 2020 National Lottery Awards. Olympian Denise Lewis handed her the award, which represents the funding being given to The Leanne Pero Foundation to continue supporting Black cancer patients and survivors. “We actually received our first grant from Lotto when we first started, so in a way it provided a beginning for all our projects,” says Leanne. “That’s why winning this was huge: it’s a chance to step back and think ‘Oh my god, we have done so much. I’m really proud of what I’ve done.’”

And for anyone who’s feeling inspired to stand up, make some noise and start their own campaign, Leanne has one piece of simple advice: “Just do it. Because there’s something beautiful in people living their truth.”