Illuminating real-time brain dynamics of neuropeptides with a fluorescent biosensor 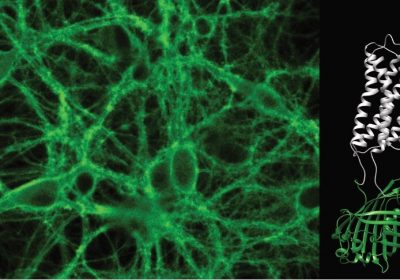 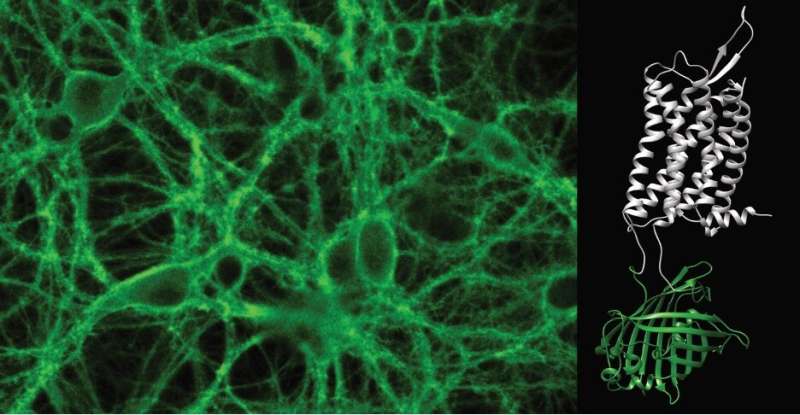 Neuropeptides play fundamental roles in modulating cellular and circuit functions within the brain. One such signaling molecule—orexin—regulates arousal and wakefulness, and its failure can lead to constant daytime sleepiness (narcolepsy). University of Zurich researchers have now developed a fluorescent orexin biosensor to observe this molecule “live” in the living mouse brain.

In the brain, billions of neural cells act in concert to coordinate both basic and higher functions of the organism. They use a special language to communicate with one another: molecules known as neuropeptides or neurotransmitters. One example of such a signaling molecule system is orexin. Normally, it regulates arousal, wakefulness, motivation and appetite. Defects in the release or sensing of orexin neuropeptides cause, both in humans and in animals, a disease called narcolepsy. Affected individuals suffer from overwhelming daytime drowsiness and often exhibit cataplexic states, in which they remain conscious but are unable to control body movement, resulting in a sort of paralysis.

Shedding light on the internal workings of the mouse brain

Tommaso Patriarchi from the Institute of Pharmacology and Toxicology at the University of Zurich (UZH) and his team have now developed a genetically encoded biosensor whose fluorescent properties enable them to study orexin action and release mechanisms “live” and with high-resolution in the brain of living mice. “The direct link between this particular neuropeptide system and its dramatic alteration in human brain functions in narcolepsy, led us to study orexin in more detail,” says Patriarchi.

The new orexin biosensor named “OxLight1” is based on a specially designed green fluorescent protein integrated into the human orexin receptor. “Marking the receptor with a fluorescent protein makes it visible under the microscope. When the neuropeptide binds to the receptor, it makes it light up,” Patriarchi adds. OxLight1 thus offers practically a real-time outlook on orexin release in living animals like the mouse.

“To understand how neuropeptide systems like orexin act to maintain healthy brain function, we need to be able to first observe the messages carried by these neuropeptides and then learn to interpret them,” says Patriarchi. Up to now, this has been practically impossible due to the lack of tools that could provide a readout with high spatial and temporal resolution. The researchers therefore used their new biosensor to investigate the relationship between neuronal activity and neuropeptide release in living animals, one of the most pressing and long-sought questions in neurophysiology that has remained elusive until now.

They showed that the level of orexin release correlates with both frequency and duration of neuronal activation. “The exquisite sensitivity and speed of OxLight1 allowed us to track endogenous orexin release associated with natural behaviors such as spontaneous running or acute stress,” says Patriarchi. As a result, they were able to demonstrate in the living brain that orexin signals can occur in the form of relatively short-lived, or “phasic” bursts of release.

The team then investigated orexins dynamics across sleep/wake transitions. By combining photometry imaging of orexin dynamics and neuronal activity recordings to score the sleep status of the animals, the researchers observed for the first time that a rapid drop in orexin levels occurs during REM sleep of the mice. Further work with colleagues from the Istituto Italiano di Tecnologia in Italy, experts in two-photon microscopy, revealed another so far unknown process: spatially localized orexin fluctuations occurring in the somatosensory cortex upon awakening from anesthesia. This latter collaborative work was conducted within the framework of the recently awarded European project DEEPER.