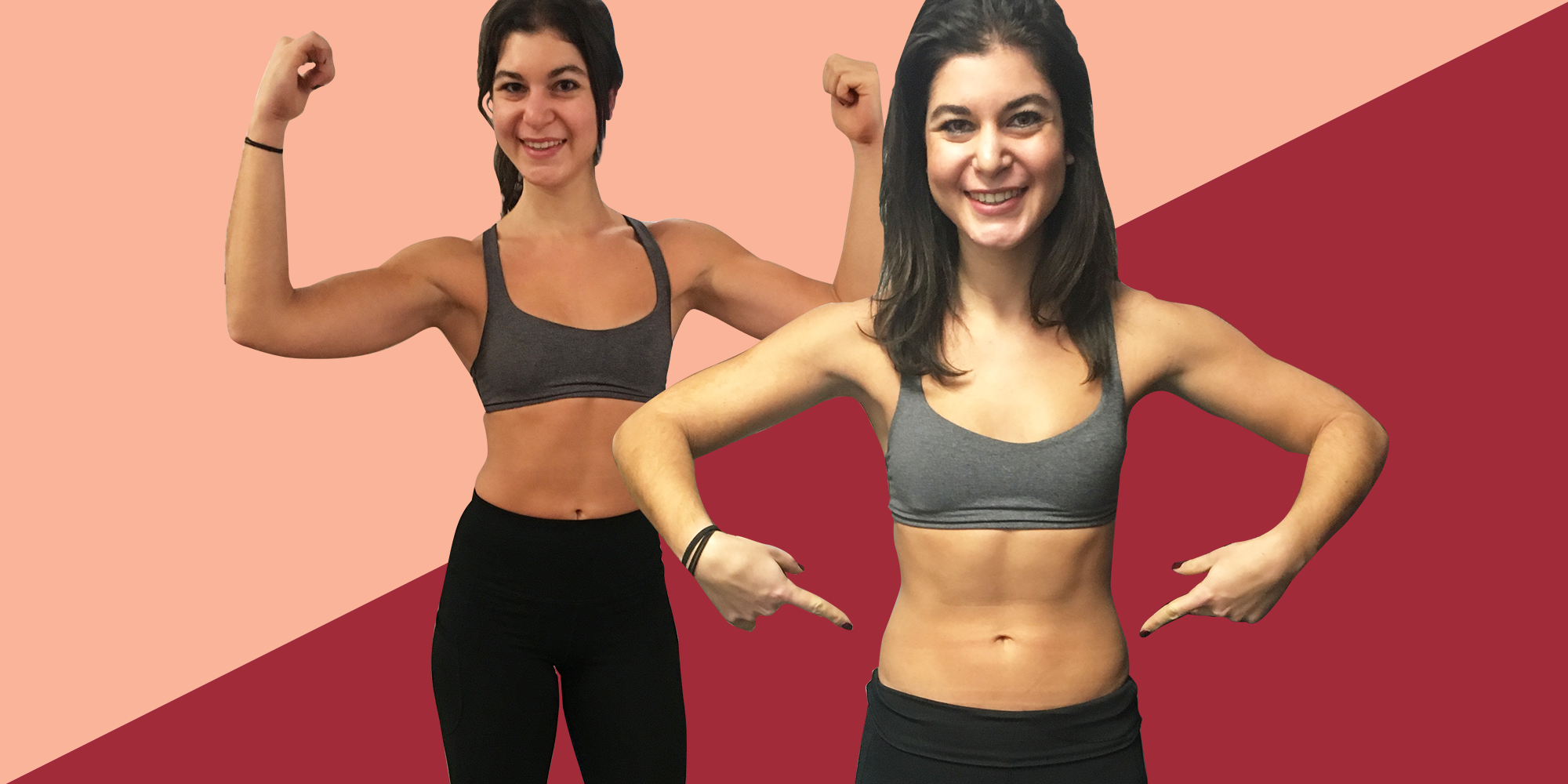 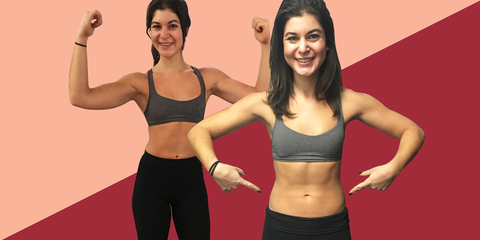 If there were three words used to describe me, they’d probably be: genuine, persistent, and incredibly active. I love moving my body as much as possible—a long walk, a spin class, HIIT, you name it.

My friends call me the “cardio queen,” because I love high-energy tabatas, AMRAPs (workouts that challenge you to do “as many reps as possible”), and sprints. Yet, unless I’m in a class, I have zero motivation to weight train. I mean zero.

So, when I was asked to test out the Women’s Health 30-Day Fitness Challenge, I was beyond excited—not just to build strength and tone certain areas, but also to challenge myself mentally. This challenge required me to complete four separate strength workouts a week—Upper-Body, Lower-Body, Total-Body, and Abs—in addition to doing the cross-training of my choice. Take a look:

Four strength-training workouts per week, on my own, sounded…daunting, to say the least. I’ve always been embarrassed to walk into a weight room, because a) I’m not as strong as everyone around me and b) I’d have no idea how to create a weight workout without a trainer’s guidance.

But with the 30-Day Fitness Challenge as my guide, I felt a little more prepared as I set forth on my strength-training journey. Plus, I can’t pass up a good challenge.

I’m not going to sugarcoat it: Week one was tough. Each workout consisted of six moves, executed for 50 seconds each, with 10 seconds of rest in between, for three rounds total.

Sure, I was used to cardio circuits, but it was a totally different story when weights were involved. I noticed my body would start to fatigue in a different way. While cardio made my heart race, strength workouts left my arms feeling like jello.

For me, the upper-body workouts and the abs exercises were by far the hardest. The lateral front raise, half-kneeling single-arm overhead press, double dumbbell drag, and plank walk up were killer. I had to take some breathers during sets. And I felt drained by the third set.

I started with 10 pounds for these upper-body weight-bearing moves. I have a decent amount of muscle in my legs, though, so I chose to start with 15 pounds for the lower-body workout, which included moves like Bulgarian split squat and sumo bent-knee deadlifts.

By week two, I was feeling pretty good. But I wasn’t super-pumped to do more upper-body work…my arms were sore!

I did realize that certain exercises were easier on my body than others, such as the rear lateral raise, overhand row, and pushup-position row. So, I switched things around, and made those the “finishers” for my workouts—that way, I could get through the moves that were more taxing on my body first.

I even started to take some baby steps when it came to increasing my weights: I began using 12-pound weights for the pushup position row, and I increased my weights for thrusters after the first set, as the 10 pounders weren’t challenging enough.

I actually made some great progress on core work, too. Part of the challenge is pushing yourself to do more reps in those 50 seconds—and I got three extra reps of the plank walkup by the third set, and five more for the plank hand taps (I got to 58 in 50 seconds!) that week—so that felt pretty damn great. I ended up using one of the “optional cross-training” days of the challenge to repeat abs day—everyone wants some solid abs, right?

As for my legs, they felt a bit tense throughout the week, but in a good way. That slight soreness in the booty and thighs meant change, and I loved that.

By the third week, I was still going strong. I could start to see my arms gaining muscle and my abs developing even more. My inner thighs and glutes also felt slightly tighter. I actually noticed this most when I went out on Saturday night in a pair of jeans that happened to feel looser around the waist and right under my butt.

My pace was also picking up during the workouts. I could get between three and four extra reps by the time I finish the third set for most exercises, and I didn’t feel as fatigued during my 10-second break. Instead, I felt invigorated and eager to tackle the next set. The visual and numerical progress at this point was incredibly motivating.

I also increased my reps for the lower-body workout and noticed I wasn’t feeling tired between sets. I tacked on about three more reps in each of the three sets, depending on the exercise and leg. For example, I was able to get to a consistent 27 reps on the right leg for split squats, and 25 reps for the left leg.

I also stepped up my upper-body workout during week three—I moved from 12 pounds to 15 pounds for the pushup-position row, and from 10 pounds to 12 pounds for underhand bent-over rows. I knocked out a few extra pushups, skaters, and squat jacks, too—all promising progress.

I doubled up on abs and upper-body days to get a little extra in this week, making the most of my two “optional” days and only taking one day off for rest.

My last week! I have to say, I definitely saw a change in my abs and stomach, as well as leaner definition in my arms compared to when I first began. And it felt awesome. I went up in lower-body weight to 20-pound dumbbells for both split squats and deadlifts. And I increased in rep count too, reaching 30 on the right side and 29 on the left (for my strongest sets).

I also went up in weight for certain arm exercises, using 15-pound weights for the thrusters, where I got a solid 27 reps in as my strongest set. And skaters? I got to 76 reps in those 50 seconds with a 12-pound weight. (Feels pretty great to say!)

During week four, I also felt more comfortable doing bodyweight moves, like pushups and decline shoulder taps. My body and core just felt more balanced and steady throughout the sets, and my arms felt noticeably stronger when holding myself up.

Overall, I really enjoyed the Women’s Health 30-Day Fitness Challenge. Some moves were certainly harder for me than others (here’s looking at you, double dumbbell drag). But that also made me want to work that much harder to build strength in those areas, and continue to take my fitness to the next level.

And I feel like it totally paid off. I saw more definition, in my abs and arms especially, than I’d anticipated for a 30-day plan.

But the challenge also helped transform my confidence. Having a timed circuit with a set number of reps to follow and a regimen in place taught me how to create my own types of workouts when traveling or lifting solo (not in a class format).

So there were physical changes for sure, but more importantly, I felt a huge mental shift. I now feel capable of continuing a steady strength training program in the future.

I’d also highly recommend this challenge to friends, or other women looking to get fit. It’s an easy routine to implement whether you have access to a gym or just your living room. And with modifications, you can go up or down in intensity based on what feels good for you. For instance, I chose to use a dumbbell with skaters for extra resistance, but you can also scale back the weight, too.

My biggest tip for anyone who’s going to give the Women’s Health 30-Day Fitness Challenge a go is to stick with it and be patient. You will never see progress overnight. But when you start to see changes around week three, you’ll that boost of motivation you need, and by week four, you’ll feel lean, confident, and totally badass.

Sweat with us! The Women’s Health 30-day challenge kicks off on January 7th, 2019. Join our Facebook group to receive daily reminders, non-stop motivation, and support from other women tackling the 30-day challenge.