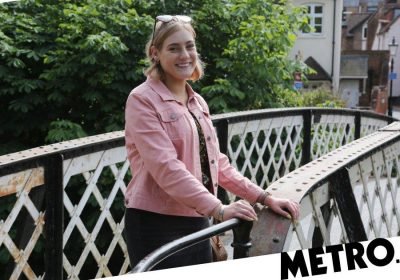 Just because someone who is using a disabled bathroom or a priority seat looks healthy, it doesn’t mean you should challenge them.

They could be suffering from a condition you can’t see – an invisible illness.

You Don’t Look Sick is our weekly series about hidden conditions – looking at diagnosis, the symptoms, the treatment and the judgement people with them face.

Cystic fibrosis is a genetic condition which causes a buildup of mucus in the body, particularly in the lungs and digestive system.

CRDF is closely related – but it is different and distinct to the two most common types that affect people without CF – type one and type two diabetes.

The conditions mean Annabelle can struggle to breathe and often suffers coughing fits. She also gets tired very quickly and she takes insulin injections to control her blood sugars.

When she is using public transport, she uses priority seats but says that she is challenged by other passengers and staff because she looks young and healthy.

She says: ‘I have had several uncomfortable instances when someone looks at me and tells me that I’m not disabled and so I can’t sit there.

‘They can’t see my fatigue or the pain in my chest from coughing so hard.

‘I also often get challenged by train conductors when they check my ticket, because I own a disabled railcard. I understand that they need to do their job and catch out people cheating the system but I know that they wouldn’t challenge someone this way if they were in a wheelchair etc.

‘I now wear a face mask when travelling (which I hate) because it reduces the number of challenges from staff and the general public.

‘I also feel too uncomfortable asking for seats on a busy trains or buses, which on a good day I can cope with, but on a bad day standing for an hour long journey really takes a lot out of me and generally makes me feel terrible.’

People with cystic fibrosis are born with the condition and since 2007, babies have been routinely tested at birth through the heel prick test for CF and other genetic conditions.

When Annabelle was born, the test was not a standard procedure and it took until around her first birthday for her to be diagnosed.

She explains: ‘I was diagnosed at about 12 months old after the whole family caught the flu one winter and I didn’t get over it.

‘Up until that point my mum instinctively knew something was wrong with me but the GP kept dismissing her concerns as new mum worries.

‘She took me to a different GP when I caught the flu and he sent us straight to A&E where I had a chloride sweat test done and they confirmed I had CF.

‘My parents were distraught because we don’t know of any family connections with it and so they were completely unprepared.

‘Not much was known about CF in the 90’s either and treatments were fairly rudimentary so they were told I probably wouldn’t live to see my teenage years.’

Significant advances in treatment mean half of people with CF now live to at least 47.

Annabelle had regular hospital check ups and when she was around 11, a routine blood test picked up that her blood sugars were too high and she was diagnosed with diabetes.

What is cystic fibrosis?

The gene affected by CF controls the movement of salt and water in and out of cells.

People with cystic fibrosis experience a build-up of thick sticky mucus in the lungs, digestive system and other organs, causing a wide range of challenging symptoms affecting the entire body.

Symptoms usually start in early childhood and vary from child to child, but the condition gets slowly worse over time, with the lungs and digestive system becoming increasingly damaged.

She explains: ‘Diabetes is a common result of having CF, due to mucus blocking our pancreatic ducts and they routinely test for it.

‘My diabetes diagnosis was a very difficult time because I already had a serious health condition to deal with and I have a severe phobia of needles so learning I had to give myself daily injections of insulin was a hard pill to swallow.’

Now into adulthood, Annabelle manages her CF with medication and nebuilzers to help open up her airways and her diabetes is controlled injections to replace the insulin in her body and regular blood sugar monitoring.

As she has lived with CF for her entire life, she has learnt to accept it but she admits that dealing with two health conditions is still very difficult – especially as she is currently studying full-time for an MSci degree in Biochemistry at the University of Surrey.

She says: ‘My day consists of waking up coughing, taking a handful of different pills, doing nebulizers for 10 minutes, injecting myself with two different insulin pens and then pricking my finger to test undoubtedly haywire blood sugar levels.

‘I then force yourself to eat breakfast because every single calorie counts, make the sometimes strenuous walk to university, sit in a lecture theatre for more than five hours, spend another three or more hours studying, then come home and do another 20 minutes of nebulizers.

‘Throughout the day I have to eat another three meals (at least) and take three more handfuls of pills and three more injections, accompanied by finger pricks.

‘I also have to spend time breathing through a device for 15 minutes which shakes my lungs to the point that I nearly vomit from coughing so hard and I take a concoction of antidepressants and anxiety medications and then go to sleep.

‘On a bad day I will probably be too tired and depleted to leave the house and will usually spend the day in bed watching TV.

‘The length of time I do breathing treatments can easily double when I’m ill to try and shift the thick secretions in my lungs.

‘On a very good day, it can be easy to forget that I’m seriously ill and so sometimes the breathing treatments and insulin will be missed, this is not great for my health obviously and contributes to the severe-ness of my bad days, but it means I get to enjoy a fairly normal day when I can, which is essential for my mental wellbeing.’

One of the biggest problems for Annabelle is that her CF means that she has trouble absorbing food, which means it can be difficult for her to put on weight.

She explains: ‘I have always been very skinny which is exasperated by my height (5”9). I often get remarks from complete strangers about my weight and have had people accuse me of being anorexic or bulimic.

‘I already have to eat around 5000 calories a day just to maintain this weight makes it even harder to hear and makes me feel like the effort I put into gaining weight is worthless.’

‘People tell me I need to stop smoking or that I shouldn’t be out in public because they don’t want to catch my ‘illness’,’ she says.

‘Comments about smoking hurt my feelings a lot because I’ve never smoked a single cigarette in my life and I do my very best to stay away from smoke as this can make me very ill, then I tend to just instantly get branded as a chronic smoker.

‘I should be the one worrying about catching an illness from other people due to my weakened immune system. I cough because of the thick mucus I produce not because I’m ill and infectious to others.’

Living with CF can be particularly hard as the risk of infection means that people with the condition shouldn’t meet due to the risk of cross contamination.

Annabelle says she has found social media useful to talk to more people who understand what she is dealing with but adds that sometimes it can make things more difficult as she compares herself to others.

‘I find that sometimes this does more harm than good because it is easy to compare symptoms etc and I start to feel inferior with my health and how I handle it,’ she says.

‘I rely on support from my friends and family, and also frequently see therapists to talk through the issues that I don’t want to burden my friends/family with.’

Annabelle adds that people often say she doesn’t look sick and although most of the time it is not malicious, it can be upsetting.

She says: ‘When I tell people for the first time that I’m ill they will comment about how I look so healthy or that they would never have known.

‘I understand that they do not mean to hurt my feelings, but a lot of the time it comes across as belittling my condition and as if I’m not as worthy of being disabled due to not always showing outward symptoms.

‘Most people do not see any part of my condition unless I have a coughing fit or I have to take insulin/pills in front of them and, as I don’t particularly feel comfortable doing this, I feel forced into uncomfortable situations in order to try and validate my illness to others.

‘I think we need to make the general public more aware that someone could be very sick and not look like it from the outside. There is not enough known about CF by the general public, which is insane because it is a very common illness.

‘Increasing awareness around why we cough so much or look the way we do would decrease the number of unfortunate interactions we face.’

How to get involved with You Don’t Look Sick

If you have an invisible illness or disability and fancy taking part, please email [email protected]

You’ll need to be happy to share pictures that show how your condition affects you, and have some time to have some pictures taken.