I Had a Massive Stroke at Age 29 and Almost Died 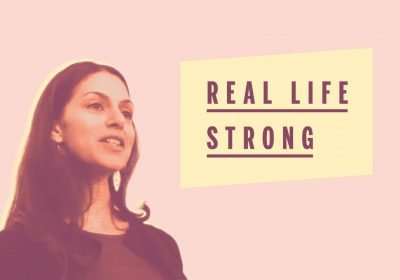 This story is part of Health’s #RealLifeStrong series, where we are celebrating women who represent strength, resilience, and grace.

After emergency brain surgery to stop a massive stroke, Dina Pestonji had to relearn how to walk and speak. Here, she talks about the strength she found in vulnerability.

I thought I had the flu. It was right before Christmas, and I had just moved home to Toronto, because I wanted to be closer to my family. My entire focus at the time was trying to be “better”: I wanted a better job, a better apartment, a better life.

I remember getting these awful headaches, and shooting pains down my body. But I felt like I didn’t have any time to waste. I needed to furnish my new place, and get ready for my first day at my new company. I was supposed to start on January 7th.

Then my sister noticed that I was actually slurring my speech. My mom took me to the hospital and there, doctors discovered a two-centimeter mass in my brain. They told me I couldn’t go home, and I remember being really upset. Not out of concern for my health, though. I wanted to get out of there to finish up everything I needed to do.

I was transferred to a hospital that specialized in the brain for testing. MRI, CT scan, angiogram, spinal tap—you name it, it was done, and five times over. After seven days, there were still no answers, and I was finally released.

But the next morning, I couldn’t feel my right arm. I couldn’t even twist the top off the toothpaste tube. That’s when I got worried.

As soon as I walked into the ER, I convulsed and fell to the floor, unconscious.

My doctor told my parents that pressure was building in my brain so rapidly, I needed emergency surgery, because otherwise I would die.

When I woke up, I discovered the right side of my body was paralyzed. I couldn’t open my right eye, and could only see a sliver of light out of the other eye. Surgeons had removed part of my skull, and since your skull is attached to your face, it was painful to open my left eye.

I had no ability to talk. My family and the medical team didn’t know if I could even understand them. They wondered if I was in a vegetative state.

Teams of doctors and students would come in regularly and say, “Dina, can you feel your right arm or leg?” But I had no way to communicate with them, and no energy to try.

Then at week four, something big happened: I wiggled my toes, and was able to use my hand to do a thumbs up. My mom wheeled me into the bathroom, and I looked in the mirror for the first time and saw my indented skull.

I was 29 and athletic. I ate healthy. I had no risk factors for disease. And yet I had suffered a massive stroke. The unidentified mass had caused an obstruction that cut off blood supply to a large area of my brain. We never figured out what the mass was. But it’s since gone away, and I take a blood thinner now to make sure I don’t have another stroke.

I progressed from wiggling my toes to lifting my legs, then getting out of bed. I worked every day to take a tiny step forward.

Speech was more difficult though. My brain was rewiring itself, and I had to relearn the basics, starting with the alphabet. At first I sounded like a robot when I spoke.

I eventually underwent a second surgery to put my skull back on. In total, I lived in the hospital for four months, then spent the next two living with my parents and doing intensive therapy. My stroke stole six months of my life. After all that, I was anxious to start living again.

At the final visit with my neurologist, I asked if I could fly on a plane. I got the go-ahead and immediately took a trip to New York. And then I went hiking on the Amalfi Coast. I needed to prove that I was more than the stroke—that it didn’t control my life.

For my next challenge, I decided to train for a duathlon. Then I ran a half-marathon, 10 months after brain surgery. This was my way of saying to the stroke, “Screw you, you’re not taking away the stuff I love.”

It’s funny, I wasn’t one of those people who felt like a medical emergency changed their life. I went right back to being the corporate executive that I was before. It wasn’t until two years later that someone read about my story, and asked me to talk to his sister who was undergoing chemotherapy.

It hadn’t occurred to me that what I had survived was a big deal, and that I might actually inspire others, and help them feel less alone. That epiphany led me to think about motivational speaking, and I went on to do four TED talks.

Last year, I published a memoir called Surviving Myself. In addition to the stroke, the book chronicled a terrible car accident I survived when I was 28, and my struggle with anorexia when I was growing up.

[Editor’s note: For more on Pestonji’s recovery from anorexia, and how her stroke actually helped her heal from the trauma, check out the video above.]

The process of writing about my life really taught me the value of vulnerability. For 20 years—through my eating disorders, my accident, and then my stroke—I had been hiding who I really was, because I thought those things made me look weak.

When I decided to share my struggles, I realized that they have made me who I am. Our lives are not a series of perfect moments. It’s everything we have been through that makes each person special and unique.

I want people to know that there’s so much strength and power in making yourself vulnerable. Being vulnerable allowed me to finally feel proud of who I am.

I love my imperfect parts. I think of them as my badges of honor.

Sign up for our newsletter and get everyday inspiration to live your healthiest, happiest life.