Home » Health News » How to sleep: The popular sleep supplement that may actually hinder sleep – surprising

How to sleep: The popular sleep supplement that may actually hinder sleep – surprising 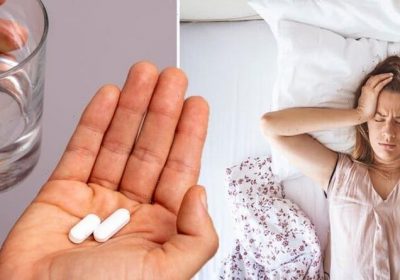 Melatonin: Doctor advises how to take supplement for sleep

The sleep hormone melatonin is naturally produced in the human body. It plays a key role in the sleep-wake cycle. The body normally produces enough melatonin, which increases in the evening with darkness. The hormone promotes healthy sleep and helps regulate the circadian rhythm.

Manmade versions of melatonin are increasingly being used as dietary supplements to treat sleep problems in the short term.

In the UK, the supplement is available on prescription only and it usually comes as 2mg slow-release tablets.

The supplement could help make falling asleep easier and prevent people from waking up during the night.

Though melatonin is generally safe to use in the short term, reports of people using more than 5mg a day have increased in the past few years, raising safety concerns.

A recent study published in the Journal of the American Medical Association warned: “The growing use of exogenous melatonin in the general population and its expanding therapeutic potential provide impetus for the acquisition of robust evidence of long-term safety of melatonin supplementation.”

In a previous publication, researchers had found that the actual content of melatonin supplements may be up to 478 percent higher than the content indicated in the label.

This evidence suggests that using melatonin for sleep disturbances might not work.

It also raises questions on whether taking melatonin is actually safe.

Subjects were monitored for short and long periods of up to 29 weeks.

The most frequently reported side effects were daytime sleepiness, headache, dizziness, and hypothermia.

The study found that most adverse events linked to melatonin use disappeared spontaneously in a few days.

In other cases, symptoms ceased with treatment withdrawal.

Taking one or two extra doses of melatonin is unlikely to cause harm.

However, they might increase side effects like headaches, nausea, pain in the arm or legs, night sweats, and itchy skin, which might make it harder to get a good night’s sleep.

In addition, it’s best to avoid taking melatonin when pregnant and breastfeeding.

The supplement can pass into breast milk in small amounts, affecting the baby’s sleep.