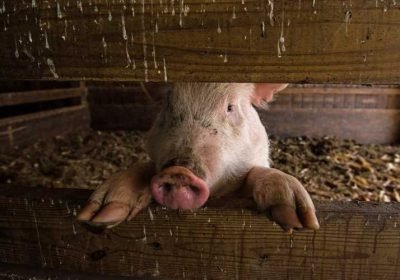 In a radical experiment that has some experts questioning what it means to be "alive," scientists have restored brain circulation and some cell activity in pigs' brains hours after the animals died in a slaughterhouse.

The results, though done in pigs and not humans, challenge the long-held view that, after death, brain cells undergo sudden and irreversible damage.

Instead, the findings, published today (April 17) in the journal Nature, show that the brain of a large mammal "retains a previously underappreciated capacity for restoration" of circulation and certain cellular activities hours after death, said study senior author Nenad Sestan, a professor of neuroscience, comparative medicine, genetics and psychiatry at Yale School of Medicine in New Haven. [10 Things You Didn't Know About the Brain]

"The main implication of this finding is that … cell death in the brain occurs across a longer time window that we previously thought," Sestan said during a news conference yesterday. Rather than happening over a course of seconds or minutes after death, "we are showing that … [it's] a gradual, stepwise process," and that in some cases, the cell death processes can be postponed or even reversed, Sestan said.

Still, the researchers stressed that they did not observe any kind of activity in the pigs' brains that would be needed for normal brain function or things like awareness or consciousness. "This is not a living brain," Sestan said. "But it is a cellularly active brain."

The work could provide scientists with new ways of studying the brain, allowing them to examine functions in the entire, intact brain in a way that hasn't been possible before. This in turn could help scientists better understand brain diseases or the effects of brain injury, the researchers said.

Although the current study was done in pigs and not humans, pig brains are larger and more human-like compared with rodent brains.

In the study, the researchers developed a novel system for studying intact, postmortem brains, dubbed BrainEx. It's a network of pumps that pipe a synthetic solution — a substitute for blood — into the brain's arteries at a normal body temperature.

Using BrainEx, the researchers studied 32 postmortem pig brains that were obtained from a pork-processing facility (which would have otherwise been discarded). The brains were placed in the BrainEx system 4 hours after the pigs' death, and were allowed to "perfuse" with the synthetic blood substitute for 6 hours.

During this time, the BrainEx system not only preserved brain cell structure and reduced cell death, but also restored some cellular activity. For example, some cells were metabolically active, meaning they used glucose and oxygen and produced carbon dioxide. Other cells reacted with an inflammatory response when stimulated with certain molecules.

In contrast, "control" brains that were not treated with BrainEx rapidly decomposed.

"We can see dramatic differences between the brains we are treating with our technology" and control brains, Sestan said.

Dr. Neel Singhal, an assistant professor of neurology at the University of California, San Francisco, who wasn't involved with the study, said the work was "thought provoking," because of some of the ethical issues raised. For example, although scientists are a long way from being able to restore brain function in people with severe brain injuries, if some restoration of brain activity is possible, "then we would have to change our definition of brain death," Singhal told Live Science.

The researchers did not see any signs of consciousness, nor was this a goal of the research. In fact, the synthetic blood solution included several chemicals that block neural activity, the kind of activity that would be needed for consciousness.

What's more, if any type of organized electrical activity — the kind needed for consciousness — had appeared, the researchers were prepared to take action to stop that activity by using anesthesia and lowering brain temperature, said study co-author Stephen Latham, director of Yale's Interdisciplinary Center for Bioethics. In other words, terminating the experiment if this happened.

In a commentary published alongside the study, Nita Farahany, a professor of lawand philosophy at Duke University, and colleagues called for more guidelines around the ethical issues raised by the study, which they say "throws into question long-standing assumptions about what makes an animal ― or a human ― alive."

Such issues include how to detect consciousness to begin with and how long systems like BrainEx should be allowed to run.

Because the study lasted for only 6 hours, more research is needed to know whether BrainEx can preserve brains for longer than this time.

In addition, a lot of questions remain about how similar this model is to the brain environment. The system does not use real blood, and the brain is not bathed in fluid as it is inside the skull, Singhal said.

But if the system can be used in future brain research, this "could lead to a whole new way of studying the postmortem brain," Andrea Beckel-Mitchener, the team lead at the National Institutes of Health's BRAIN Initiative, which co-funded the research, said in a statement. "The new technology opens up opportunities to examine complex cell and circuit connections and functions that are lost when specimens are preserved in other ways," Beckel-Mitchener said. The work also could stimulate research on ways to promote brain recovery after loss of blood flow to the brain, such as during a heart attack.

Still, the study didn't come close to being able to revive a brain, pig or human, after death. "Basically, when the brain loses circulation, it's like a very intricate building has just [started] crumbing into a million pieces," Singhal said. The new work suggests that this method "can restore some of the foundation" but there's still the cathedral of the brain to be built on top of that foundation, he said.