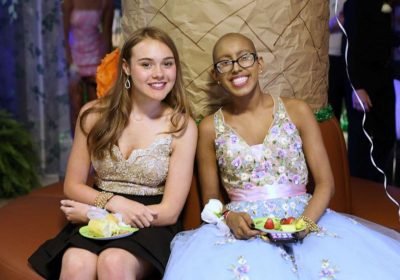 Some patients at Children’s Healthcare of Atlanta recently had a prom night they won’t forget, all thanks to the hospital’s staff and volunteers.

On May 3, the hospital’s Zone was transformed into a sort of party wonderland for the sixth annual Zone teen prom, complete with music, a photographer, food and twinkling lights.

“The Zone at Children’s Healthcare of Atlanta is where our patients come to put their cares behind them and have fun, including parties and other special events,” said Ayana Isles, the hospital’s public relations coordinator.

Anika Shah, 16, who said she is receiving treatment at the hospital’s Aflac Cancer Center, said that she was getting chemotherapy a few days before the party when she got the invite. She said she picked a party dress from the hospital’s collection of donated dresses but as the event neared, she got nervous.

Luckily, though, all was well when she got to the hospital’s parking lot and met Isabella Moore, 15, who had last been treated at the hospital in December. It was both girls’ first time at the Zone prom and at any prom, they said.

Moore said the prom was “breathtaking” and “beautiful.”

“We went out to dance,” Shah said. “And after we danced, we did the little photo shoot. And we looked at the time and it had already been an hour. And it felt like 20 minutes. 30 minutes and I was like, ‘Whoa!'”

Staff and volunteers said that it took a year for them to plan, organize and execute the dance for the children but that all the work was worth it.

“These children come through that door. They have smiles on their faces. They forget that they’re sick for just a few minutes. … It’s amazing,” said volunteer Carrey Burgner, who said she’d started as a volunteer with the Zone but had been helping put on the prom since its inception.

Tamesha Simmons, 17, attended the prom with her twin sister and her mother by her side. Simmons, who had both of her legs amputated in February due to a poor blood-flow issue, is recovering at the hospital.

Like Shah, she picked out her dress and got her nails and her hair done for the special night. And, at the party, she did something she had not done in front of her family in 10 years: Simmons stood up on her new prosthetic legs, smiling and proud.

“This was the first time my mom saw me and she was really happy. It was good, standing up. … I did way better standing up here than I did, like, in therapy,” she said.

The hospital documented the entire night, hoping their young patients enjoyed this rite of passage and Shah thanked the Zone’s staff and the hospital for holding the prom for the patients.