Here's How Much Your Tattoos Can Affect the Way You Sweat 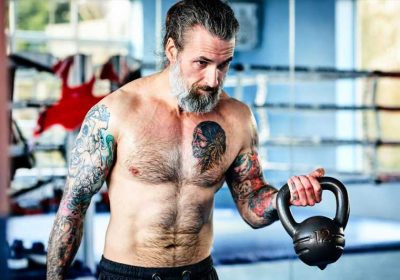 If you’ve got tattoos, chances are you’ve heard that your ink may be messing with your workouts and blocking your sweat glands. But tattoos—especially among athletes—are quite common, begging the question: Does getting inked inhibit your sweat gland function?

A few researchers from Australia set out to see if this claim is actually true. If tattoos were in fact making you sweat less and messing with your sweat’s sodium concentration, your performance could take a nose dive, since your body isn’t regulating itself properly.

The study, published in the Journal of Science and Medicine in Sport, looked at 22 inked men and women between 18 and 45 years old who had at least one tattoo that was more than two months old, just under 2 square inches in size, and was 50 percent or more shaded.

Participants performed four five-minute intervals (with one minute of rest in between each interval) on a cycle ergometer at a rate of perceived exertion of about 15—which Harvard University’s T.H. Chan School of Public Health defines as “bicycling, swimming, or other activities that take vigorous effort and get the heart pounding and make breathing very fast.” According to the study, the participants’ average heart rate was around 165 beats per minute (bpm).

The participants’ sweat was soaked up through two absorbent patches—one of which was placed on the participants’ tattoos and one of which was placed in the same, untattooed location on the opposite side of their body. For instance, if someone’s tattoo was on their right forearm, they compared that area’s sweat rate with the same exact location on their left forearm. (Researchers weighed each participant at the beginning so that they’d later be able to tell how much sweat they lost postexercise.)

Additionally, for both the tattooed and non-tattooed areas, there were virtually no differences in the total amounts of sodium lost through sweat.

This shows that despite what people may have thought, the microneedling or ink deposition with tattooing does not damage the dermal layer of your skin, or cause scarring that may mess with the function of your sweat glands, study author Ben Desbrow, Ph.D., associate professor of sports nutrition and dietetics at Griffith University, told Runner’s World.

If that were the case, having tattoos may expose people to greater risks of heat-related illnesses or compromised exercise or work performance, since sweating is the main way humans thermoregulate during exercise or in hot conditions, Desbrow said in a press release.

The line of thinking may have come about due to a previous study, which showed having a tattoo reduced localized sweat rate and increased sweat sodium concentration.

“However, the sweat response was triggered using an artificial stimulation technique rather than under exercising conditions,” he said in the release.

A thin, easy-to-spread lotion that won’t leave you feeling sticky.

This organic, water-resistant lotion is nongreasy and is good for 80 minutes of hard sweating.

Made by professional triathletes, this zinc-based sunscreen is designed to last through your long runs.

These skin-nourishing essentials keep your ink bright, vibrant, and protected.

Desbrow and his colleagues do note in the study that further investigation is needed to know whether or not certain types of tattooing techniques, ink, or equipment could affect our sweat glands. Additionally, it’s not yet known if larger tattoos that cover more skin in high-sweat areas affect our sweat glands either.

The bottom line? More research still needs to be done to reach a definitive answer on how tattoos affect your sweat rate. But until then, if you have a hankering for some new ink, don’t let us stop you from making your next appointment.