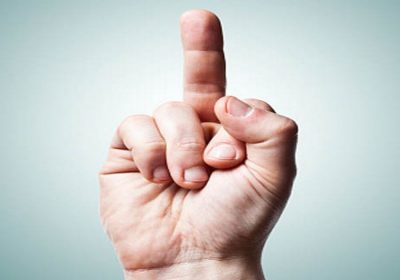 Giving the middle finger often frees us from feelings of frustration, but researchers have found that the one-fingered salute can also reduce pain.

The study revealed that ‘flipping the bird’ and ‘flicking the Vs’ can help to slash discomfort by around a tenth.

Swearing verbally was also found to have a similar effect.

Participants in the Kalamazoo University study placed one hand into icy water and repeatedly stuck up their middle finger, or made a non-offensive gesture with the other.

In other tests they shouted “f**k” or said “flat” after submerging their hand in the frosty water.

Those giving the one-fingered salute withstood pain for 125 seconds on average, 12 more than those with the non-offensive gesture.

They also lasted longer than the swearers who outdid the “flat” group.

Want the Daily Star's sexiest stories news straight to your inbox? Sign up to our daily Hot Topics newsletter HERE According to the researchers, giving the middle finger may help to reduce pain, as we unconsciously think f**k while doing it.

They added that it may also be a distraction to the discomfort.

Lead author of the study, Professor Autumn Hostetter, said: “This is the first research to show a taboo gesture has a pain-lowering effect similar to that produced by a taboo word.”